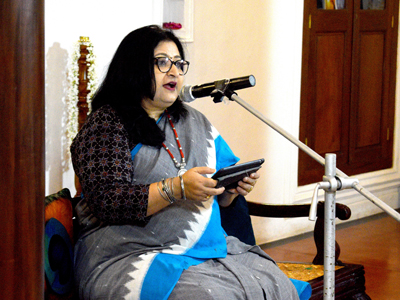 As part of the recently concluded Pondicherry/Auroville Poetry Festival organised by Pondicherry Poets and The Brown Critique, Dr. Beloo Mehra, Senior Academic Mentor from AuroBharati was invited to give a talk on the topic – Gender Equality: A Spiritual Perspective. This topic was chosen to be consistent with the overall Equality/Oneness theme of the poetry festival.

Dr. Mehra’s talk was part of the morning sessions held on December 21st at Matriniketan, Pondicherry. Quoting a verse from Shvetashvatara Upanishad (4.3), Dr. Mehra highlighted that the Indian spiritual vision of Existence fundamentally sees Spirit or Brahman as the essential One Reality manifesting in all and pervading all existence. So man and woman which seem as two distinct entities in Nature, in this relative world, are essentially the manifestation of the same One, two halves of one body, and therefore, in essence one and the same. 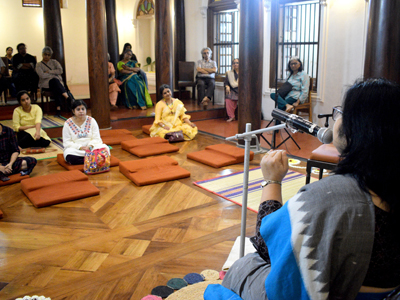 Dr. Mehra built upon this point using several examples from Sri Aurobindo’s epic poem, Savitri where the oneness of Purusha and Prakriti, and Ishvara and Shakti is highlighted. She added that in this spiritual perspective it is only in the Relative Existence and for the purpose of creation, that Masculine and Feminine exist as two separate entities, representing the duality of the Purusha, the Being, and Prakriti, the Nature. The essential Oneness of the Supreme Being of which the two are manifestations remains One in its essence, thus indicating that each of the two entities are complete and whole in themselves, one in essence with the Supreme Oneness.

From a sociological perspective, this implies that man and woman, though complete in themselves, seek a larger fullness and greater harmony when they come together, not to complete each other but to experience the Oneness and Harmony that is essentially part of their separate beings and yet seeks a greater field for its play and expression. She gave a few examples from the Indian tradition to emphasise that the notion of equality rises to identity and oneness when seen from a deeper spiritual perspective. Mention was also made of Sri Aurobindo’s work ‘The Mother’ especially the part about the four powers of the Mahashakti and its implication and significance for individual development of men and women as integral beings.

Pertinent insights from the Mother’s conversations and writings were also pointed out to highlight the deeper essential equality between men and women. It was emphasised that the Mother saw the problem of feminism, like all other problems of the world, as essentially a spiritual problem. And so the deeper solution to any outer gender-based inequalities we see in the world today must also be a spiritual solution, which means elevating oneself in consciousness to gradually and progressively arrive at a deeper sense of unity and oneness within and with all around. The Mother’s conversations from the Agenda about the new species and a new being which will be beyond the binary of male and female was also briefly touched upon. 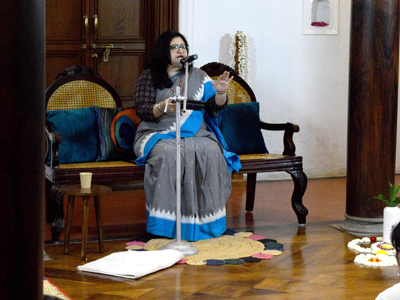 The session was highly appreciated and there were several questions from the audience members after the talk. Dr. Mehra addressed these using relevant examples and insights from the works of Sri Aurobindo and the Mother, and also contemporary reality in the world. Throughout the session, the focus was to connect the deeper spiritual perspective to the challenges we face in today’s world regarding gender inequality. Dr. Mehra also emphasised that in addition to equality and freedom, a more spirituality-guided integral approach to feminism will equally emphasise the values of diversity and harmony.