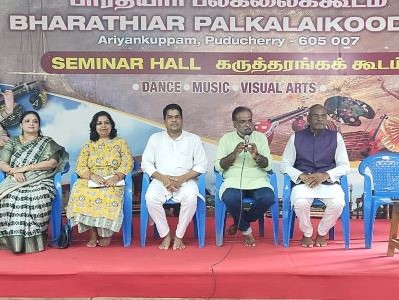 “The first of these dreams was a revolutionary movement which would create a free and united India. India today is free but she has not achieved unity.”

AuroBharati, Sri Aurobindo Society in collaboration with Bharathiar Palkalaikoodam (Bharathiar Centre for Performing and Visual Arts) organized a Special Session of Lecture-cum-Demonstration on 14th October, 2022 at Seminar Hall-BPK, Aryankupam, Puducherry. The program was based on lectures on ‘Masked Shadows’ by Hashanath Khan; ‘Contribution of Sri Aurobindo & Subramania Bharathi in the freedom movement’ by Dr. Kishor Kumar Tripathy; lecture on ‘Philosophy & Literature of Subramania Bharati’ by Dr. Sundar Murugan and screening of the film ‘The Transformation’ produced by Sri Aurobindo Society, Puducherry. 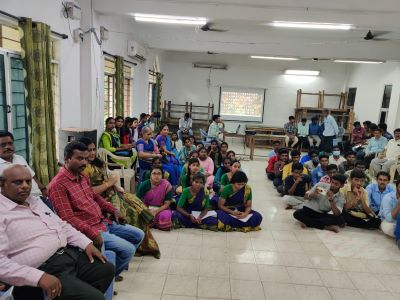 Inaugurating the program, Dr. P.V. Bose, Principal, Bharathiar Palkailakoodam said about the celebration of the completion of 75th year of India’s independence and 150th year of the birth anniversary of Sri Aurobindo. He emphasized on the contribution given by the immortal souls of Mother India for achieving freedom for the nation.

Speaking on the occasion, Dr. Kishor Kumar Tripathy, Member Secretary, AuroBharati, Sri Aurobindo Society, Puducherry spoke on the contribution by Sri Aurobindo and Subramania Bharati in the freedom movement. He said that the independence movement of India incorporated by the efforts of Indians involved a wide spectrum of Indian political organizations, philosophies and rebellions and India’s emergence as an independent country. He also spoke about the exemplary life of Mahakavi Subramania Bharati, freedom fighter, poet, social and spiritual reformer. His contribution not only aroused patriotic fire but also touched every aspect of human life through his poems and writings. Highlighting the life and contribution of Sri Aurobindo, he emphasized on his role in Indian nationalism, complete independence, action and direct participation in the freedom movement and said that as a freedom fighter he combined himself the role of a prophet, visionary and statesman. He spoke about the role played by Mahakavi Subramania Bharathi on the national scene when the freedom movement was catching fire from all quarters of Indian Society. He emphasized on the patriotic thoughts of Mahakavi Bharati including struggle for freedom movement and literary contributions which were instrumental for the freedom and unity of Mother India. 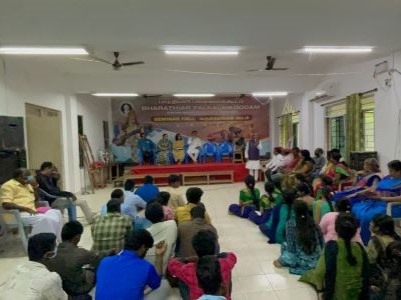 Dr. Sundar Murugan spoke on ‘Philosophy and Literature in the Works of Subramania Bharathi’ and mentioned about his deep patriotic thoughts ‘When will this thirst for freedom slake? When will our love of slavery die?  When will our Mother's fetters break? When will our tribulations cease?’ He mentioned that many years of Bharathi were spent in the field of Journalism and he gave an inspirational message through his immortal thoughts. He was a poet, journalist, freedom fighter and social reformer and had made a great impact not only the Tamil Society but also on the entire human society. His monumental works on national unity made him an inspirational poet on patriotism. As far as the contribution of Mahakavi Bharati is considered, for the first time he introduced a spiritual dimension to the freedom movement and his compositions revealed on the physical and spiritual greatness of India. Maharshi Aurobindo and MahakaviSubramania Bharati’s interaction added a new chapter in the history of India. Both of them considered Bharat as the Mother, they developed the spirit of patriotism, the burning fire of nationalism and fought for the freedom for this great land.

The eternal Himalaya is our very own asset.
There's nothing else to equal it as yet !
The sweetly nourishing Ganges flows here dancing.
Is there a river on earth so entrancing ?
The expository Upanishads are our prized treasure
The entire world doesn't have any work of that measure.
Oh,the Golden Bharath is verily our own land
Hail our land,we are of a matchless brand!!