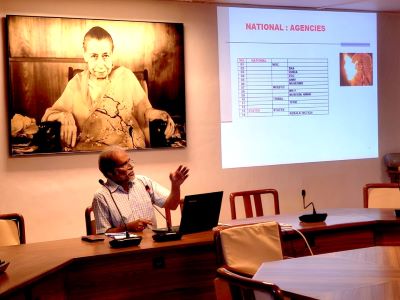 Dr. Kishor Kumar Tripathy, Member Secretary, AuroBharati, Sri Aurobindo Society introduced the speaker and told that heritage is the customary beliefs, social forms ,and master traits of a racial and religious group and also set of shared values and practices. It is divided into two parts, tangible and intangible. He further said that tangible cultural heritage is transmitted intergenerationally in society and intangible is traditional, contemporary and living at the same time and also focuses on inclusive, representative and community-based. He also informed about the initiatives undertaken by AuroBharati, Sri Aurobindo Society in the areas cultural heritage management. 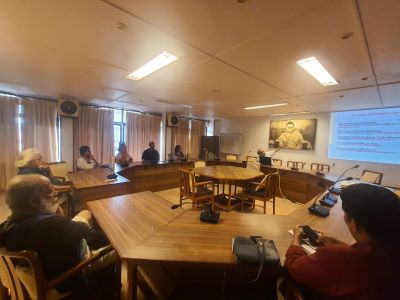 Dr. Venugopal further expressed his views on the role of museums in preserving cultural and natural heritage and emphasized on Bio-Cultural Diversity and Its accessibility.

Highlighting the future road map for the Intangible Heritage, he spoke about fostering community participation, strengthening international cooperation through ICH, promoting academic research and aligning the work of the convention with the UN Sustainable Goals including policies for the protection and preservation of Heritage.

Dr. Venu Gopal served in many positions including Director of the National Museum of Natural History New Delhi (Ministry of Environment Forest and ClimateChange), Director of the Indian Museum Kolkata Ministry of Culture,  the oldest Museum in Asia Pacific during its 200 anniversary year, Director Honorary of Centre for Intangible Heritage Studies at Sree Sankaracharaya University of Sanskrit Kalady and  Registrar of National Museum Institute Deemed to be University (Ministry of Culture).