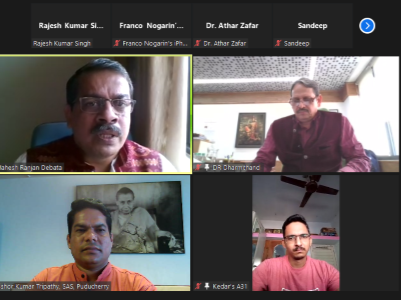 A new spirit of oneness will take hold of the human race.

Dr. Kishor Kumar Tripathy spoke about aims and objectives of the project “India & The World’ and said that linkages between India and Central Asia go back to ancient times and as two important wings of ancient civilization, both the regions have not only been caring for each other, but also sharing each other’s historic cultural heritage and socio-political milieu besides understanding their economic needs, demands and aspirations. 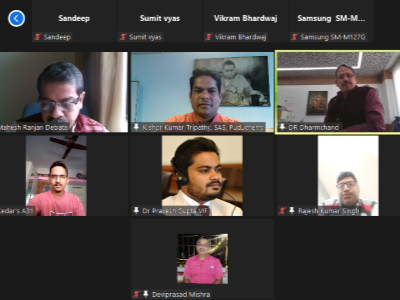 He mentioned about the vision of Maharshi Aurobindo “Ancient and yet ever youthful powers, full of joy, help and light, shining ones with whose presence the regions of earth and the hearts of men were illuminated, Angels and Deputies of the mysterious unknown God, worshipped in India, worshipped in Mesopotamia & Central Asia.” He emphasized that alongwith bilateral dialogue mechanism, trade and investments, education, defence cooperation, space and security sector, culture can play a significant role in strengthening the age-old relationship between India and Central Asia.

Dr. Mahesh Ranjan Debata spoke on the multidimensional, deep, old and continuous relationship between India and Central Asia from ancient times. The emergence of five new independent republics of Central Asia - Kazakhstan, Uzbekistan, Kyrgyzstan, Tajikistan and Turkmenistan – following disintegration of the erstwhile Soviet Union in the year 1991 brought about a significant change. He said that the relations between India and Central Asia have been multi-dimensional, deep, old and continuous from the ancient times till date. Historical and cultural links have been the bedrock of India’s relations with Central Asia. For the people of Central Asia, India is a skazka(fairy land) where only rich and prosperous people live, each person has a melodious voice and can sing and dance, and where rich girls opt for poor boys and where only pure love reigns supreme. And for India, Central Asia is an important, extended, or immediate strategic neighbourhood. India’s linkage with the region is depicted in great Indian epics - the Mahabharata and Ramayana.

He emphasized on literature, language, art, culture and philosophy were the other important factors which contributed largely to cultural efflorescence further enhancing ties between India and Central Asia. Sanskrit was intimately linked with the Central Asian languages of Shaka and Slav, and was methodically and systematically taught across Central Asia. Medieval Indian literature provided considerable geographical information about India and its neighbourhood in Central Asia. Litterateurs in Central Asia referred to many great Indian literary works like Panchatantra and Hitopadeshin their works. Works of great Central Asian scientists Ibn Sina and Al-Khawarezemi, and poets Rudaki, Jami and Novai were popular in India. Bedil, one of the greatest Tajik poets, was born in India and buried in Delhi. Both Tajiks and Indians consider him to be their own poet. Similarly, Indian art, culture and philosophy made a profound impact on Central Asia’s heritage.

The pre-medieval period witnessed a surge in India’s historic-cultural ties with Central Asia. Samarkand and Bukhara were the main trading centres of Indian traders and merchants. Indian art traditions referred to Samarkand school of painting and calligraphy. Renowned Indian scholars like Aryabhatta, Charak and Susruta contributed a lot to Indo-Central Asian ties through their knowledge of science, astronomy and medicine.

He also said that during the 19th century Great Game between Russia and the British India, Central Asia rose to prominence. After India got independence on 15 August 1947, relations with Central Asia were renewed and reoriented under the aegis of Indo-Soviet friendship. During the Soviet period, Indo-Soviet Treaty signed in the year 1971 promoted cultural exchanges between India and Central Asia. At this juncture, Central Asian leadership looked at India, the much avowed neutral actor with many virtues, a natural and an emerging global power. India reciprocated with a warm response. Keeping intact its image as an old, neutral and faithful friend of Central Asia, India was one of the first countries to extend unstinted support to these republics to resuscitate the age-old ties. And as part of its efforts to resuscitate the age-old ties, India established embassies in each of the five republics within weeks after their independence on 26 December 1991.

Significant discussions focussing on the bilateral relationship, Geo-economic importance, domains of cultural and people-to-people engagement were discussed during the program.