A Talk on Women’s Equality and Freedom 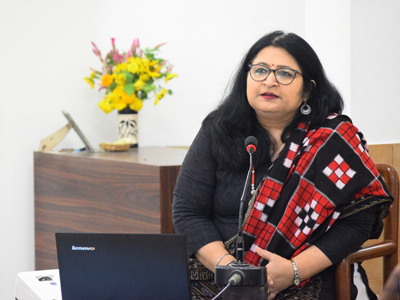 part of the third day Seminar organised by Women’s Council of Sri Aurobindo Society, Dr. Beloo Mehra, Senior Academic Mentor at AuroBharati delivered a talk on the topic - Women’s Equality and Freedom: Insights from Sri Aurobindo and the Mother.

Dr. Mehra began her session by sharing a few key ideas from Sri Aurobindo’s book, The Mother, and gradually taking the discussion to the idea of Shakti. She highlighted that the Mother said emphatically that the problem of feminism is essentially a spiritual problem. And the lasting solutions to the challenges faced in modern society – whether of gender inequality or other tendencies that try to curb women’s freedom for self-determination can only be found when one rises high in one’s consciousness. It is the mind-borne cultural view of gender differences which has led to the problem of inequality. But essentially, difference does not mean less than or more than the other. To arrive at this, a deeper, higher and wider vision of human life and aim of human existence is essential.

Dr. Mehra also pointed out a passage from the Mother where she speaks of two principles of existence in the manifestation – one dynamic and other static, but she clearly explains that the whole idea of assigning one a masculine character and another feminine is entirely a creation of human mind, and that is not the Truth. This discussion helped the participants appreciate the fundamental equality.

Sufficient time was spent on discussing the concept of Shakti. Some key ideas given by Sri Aurobindo and the Mother in this regard were presented. A few important ideas from some of the essays by Nolini Kanta Gupta were also shared.

The freedom aspect was highlighted by bringing to the front the idea of inner enslavement. What kind of freedom is being sought? And freedom from what? These questions helped bring home the point that in the integral vision of life and human existence, an individual’s constant seeking for inner progress has the potential to free the individual from the chains that bind the heart and mind.

Dr. Mehra pointed out that by bringing these examples, the idea is not to ignore that serious problems of gender inequality and lack of freedom definitely exist in our society and all societies. But it is important to understand the real cause of such problems and not create further division between men and women in the process.

To make some of this discussion more concrete, Dr. Mehra shared several examples – from Indian history as well as the present times – to illustrate how Indian women who have always connected deeply with the idea of Nari Shakti have been able to overcome toughest challenges life has thrown at them. The examples ranged from warrior queens to yoginis, from successful businesswomen to highly decorated police officers, from rocket scientists to soldiers.

When briefly recounting the stories of some of these women, Dr. Mehra pointed out the relevant connections to the ideas of inner freedom and an aspiration for progress as some of the key reasons for the accomplishments of these real-life women. They were not constantly fighting against someone or something – an alleged external enemy, but were more concerned about transcending their own inner limitations. This requires that women must first become deeply aware of themselves and walk the path of arriving at their true individuality. These points were highly appreciated by the participants, as several of them shared so after the conclusion of the session. 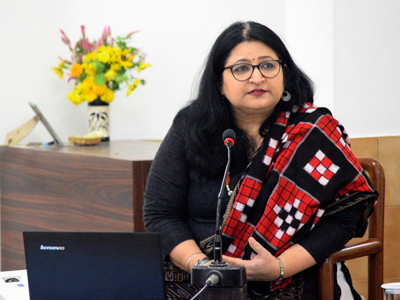 Throughout the session, quotes from Sri Aurobindo and the Mother were brought in as the highest light of the spirit in which to understand what was being presented and discussed. The session was also kept interactive. Many participants shared their perspectives and/or asked relevant questions which were addressed briefly by Dr. Mehra.