An Orientation to Dance for Well-being 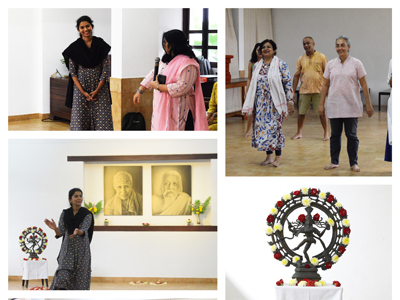 On 18 November 2022, the Renaissance-AuroBharati team organised a fun participatory programme titled ‘An Orientation to Dance for Well-being.’ The program aimed to engage the participants through music, dance, interaction and some participatory fun.

About 30 participants joined the workshop as the facilitator guided them in finding the rhythm and tuning in their own bodies through simple dance movements. The programme began with Dr. Beloo Mehra introducing the facilitator. After a few initial remarks about what she hoped to do during the hour-and-a-half-long workshop, Ms. Ramamoorthy led the group into some simple warm-up exercises. 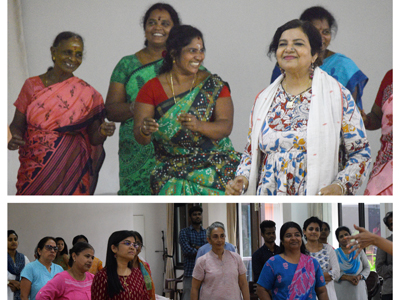 She then played a popular Hindi song and instructed the participants to move with the rhythm in whichever manner they felt guided from within. The idea was to begin to feel the space where dance is about to begin. The participants soon began to feel comfortable with the idea of dancing and were now ready to enjoy fully.

Ms. Ramamoorthy then showed a few simple dance movements and encouraged everyone to follow along as she broke down the movements into simple steps. She played three different popular songs in Hindi, Malayalam and Tamil on which the group was soon dancing, following the instructions of the facilitator. The multicultural fun programme was open to all, including those with no prior dance training or experience.

The gentle manner in which the participants were guided from one step to the next made them recognise their own inner rhythm. At several instances, Ms. Ramamoorthy also pointed out the significance of correct posture when dancing, especially in those movements which involved bending or turning of the neck and spine. The participants were also encouraged to use dancing and rhythmic movements to relieve themselves of the stress anytime they feel overwhelmed. Ms. Ramamoorthy spoke briefly about how the process of getting back into the body’s rhythm helps one find a sense of inner harmony and also a greater peace with the outer situation. 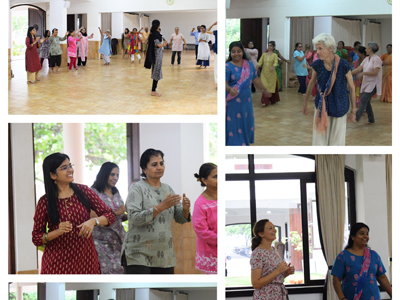 Krishnapriya Ramamoorthy, the facilitator for this workshop is a Bharatnatyam dancer and an art producer and founder of Paallam Arts CIC, a multicultural arts management company based in Wales, UK. She has Master’s degrees in Arts Policy and Management from the Birkbeck University, London and in English Literature from Pondicherry University. She strongly believes that art heals and has the power to impact individual and social values. She has performed and conducted workshops for adults and children in USA, UK and India.