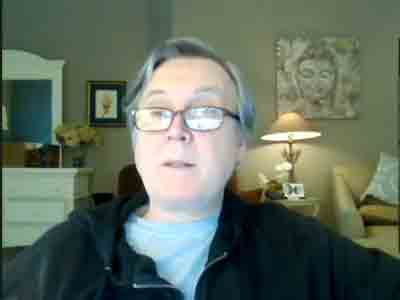 The speaker repearedly touched upon the attempt to synthesise knowledge, the first synthesis of knowledge being Samhita, followed by Brahmanas and then the Upanishads. There was at least a thousand year gap between Samhita and Brahmanas. 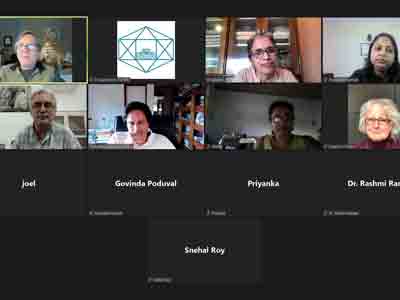 The four ashramas were discussed, namely, Brahmacharya (age 6-30, gurukula), meant for learning and perfecting texts by heart, acquiring knowledge, Grihasta (age 30-55/60), a period of action and activity, Vanaprastha (age 60-80) - reflection upon what happened in your life, of householder and gurukula time, to fulfil personal enquiries within this period and finally Sannyasa (age 80 and above), to renounce attachments completely and surrender to Divine.  This was the perfect system for spiritual life as all life is an educational project for spiritual life.

The Upanishads were an attempt to recapture the knowledge of Veda in a new fashion, to share the knowledge in a totally new format as mentality had changed, language had changed. As Sri Aurobindo says in The Life Divine: “The Unknown is not the Unknowable; it need not remain the unknown for us, unless we choose ignorance or persist in our first limitations. For to all things that are not unknowable, all things in the universe, there correspond in that universe faculties which can take cognisance of them and in man, the microcosm, these faculties are always existent and at a certain stage capable of development. We may choose not to develop them; where they are partially developed, we may discourage and impose on them a kind of atrophy. But, fundamentally, all possible knowledge is knowledge within the power of humanity.” 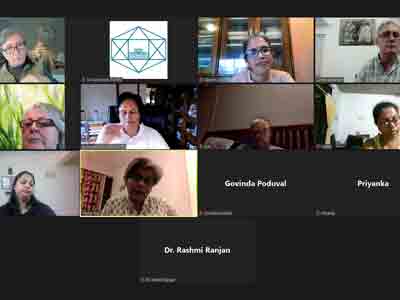 Purusha’s sacrifice was known in the ancient texts as the holocaust of the Divine Mother. The Mother gave herself to this world with the force of Love. Only with Love can someone plunge into the darkness to bring it back to Self-awareness.

The third session talked about Samkhya and the transition from Vedanta to Upanishad to Samkhya. Samkhya is the beginning of the mental structure of consciousness. Ahamkara is the centre that allows us to view things in individual, personal ways. Humans and animals have manas, the sense-mind. The five Indriyas are coming from Purusha. These are the projections of Purushas. Purusha’s sanction to Prakriti is nothing but the projections of faculties. Egoism is an excessive demand of attention to oneself. Ego is not egoism. Consciousness power, Chit Shakti or Chit Tapas, is a major vibration without which there can be no act of knowledge and therefore, sense. Every creature knows how to be itself. It has that consciousness built inside. Everything knows how to be because of inbuilt consciousness in it. 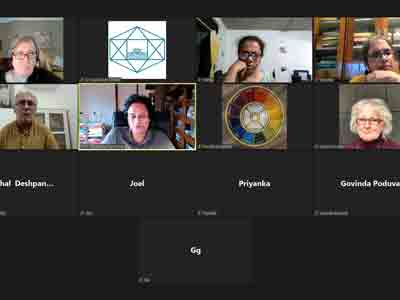 The speaker talked about the Rahasyam uttamam in the fourth session. Karma yoga is the highest secret. The meaning of it is that we can be spiritual while acting. We can be either totally perceptive or active. How is that at all possible to be active and to be perceptive? This is the secret. Karma Yoga was misunderstood by many. It is not a duty to social order. It is something much more. You begin Karma Yoga with a withdrawal from the fruit of action; it brings a psychological freedom. For the action you have the right but not to its fruit. Psychologically, you are not attached to the result. We are always expecting the result: this is a fundamental psychological problem of attaching to the fruit of action.

We have to engage in life in the karmayogic way. There are 3 freedoms -

1. Freedom from the fruit of action.

2. Freedom from chosen modality of action – my way of doing, because I enjoy this action.

3. Freedom from the actor – action is being done entirely by gunas of nature. The ego of

doer-ship. He thinks, “I am doing it” however it is nature doing it through the 3 gunas.

The freedom from the very idea of being a doer.

Finally, Yoga is integration in a way. Yoga is when everything is united, all the bits and pieces of our consciousness. We think of ourselves as bits and pieces, that I am: this worker, I am this engineer, we think in those terms. We have many dharmas to fulfill in this life, dharma of brother, dharma of father and so on. How could I integrate myself in such a way that we are always an integral part of the world? The world is not only outside, the world also is within and transcendental. Integration of level of consciousness into one being. This is the aim.

About 25 people registered for this event. The workshop was held in a deeply immersive and concentrated atmosphere as Dr. Vladimir Yatsenko beautifully guided everyone through the ancient knowledge systems, never stopping to comment on their compatibility and relevance to Integral Yoga.

What did you enjoy most about the workshop?

“The vast depth of knowledge, Integration of ideas, inspiring delivery and the cohort.”

Did this programme help you contextualize these knowledge-systems in terms of Integral Yoga?

“Yes. So many gaps in my understanding got cleared....”

Can't think of any. Wishing for more such sessions!!