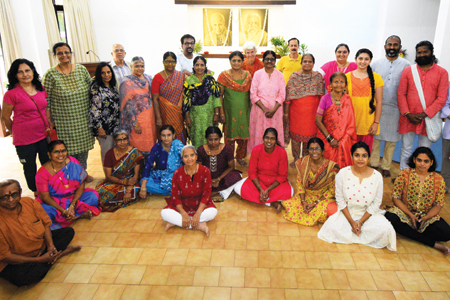 It is my prime duty to thank Sri Aurobindo and The Divine Mother for presenting this opportunity, to participate in the Women's Council Seminar held at Sri Aurobindo Society, Puducherry from 21.11.2022 - 23.11.2022. The theme of this year's Seminar was 'the 150th Birth Anniversary of Sri Aurobindo'.

The venue, Society House played a major role with a serene ambience and its divine atmosphere on the laps of Bay of Bengal, the sound of waves synchronised with the chanting of "OM". 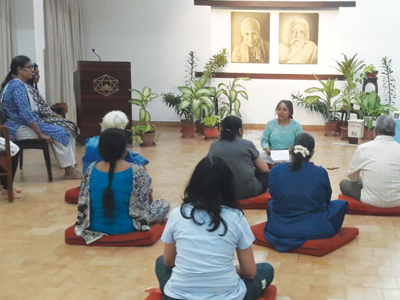 The first day's session began at 6.00 a.m. with 'Awakening of the physical' by Priti di. We did a few mild exercises followed by mindful walking and conscious body scanning which was conducive for all age groups. This continued for the next couple of days with light 'Tai Chi' movements making us feel flexible and supple. Priti di highlighted upon Patanjali yoga sutra 'Sthiram Sukham Asanam' (sthiram – steadiness, sukham – comfort and asanam – motions). Based on this fundamental principle all the movements done were simple and rhythmical which brought poise to the body.

The sessions on all the three days commenced from 9.00 a.m. with the Mother's music and then 'Vandhanam' was offered by a few delegates reciting prayers and chanting shlokas. 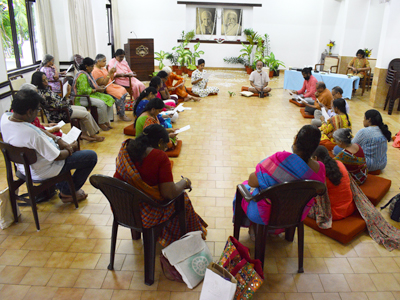 At 9.30 a.m.  Shri Pradeep Narang, the Chairman of Sri Aurobindo Society gave the introduction. He reiterated the importance of the birth anniversary of Sri Aurobindo stating that there are certain times when the concentration of divine forces descend and give protection to humankind, during these moments, when we collectively aspire and invoke the Divine, it has a receptivity to reach God and connect with the universal soul. Also, our collective objective is to spread the teachings of Sri Aurobindo and the Mother that it may be applied in all spheres of life for a higher aim and purpose. He also spoke about the importance of prayer and how it must be offered without any demands, by remembering and offering everything to the Divine.

The juice break for 20 minutes was followed by a power point presentation (PPT) by Krishna on the 'Spiritual Significance of Flowers by the Mother'. The session on both days dwelt on those particular flowers dedicated to Sri Aurobindo to commemorate the special event of Sri Aurobindo's birth anniversary. 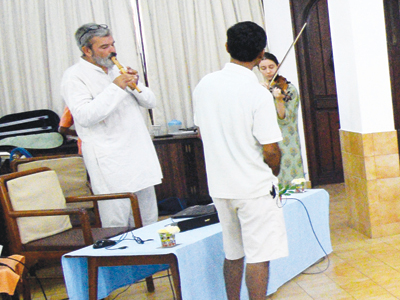 Shri Shivakumar the director of AuroYouth and coordinator of the ongoing project — a 20 minute animated film 'Sri Aurobindo: A New Dawn', explained how the team is meticulously working on the making of the film with the core purpose of promulgating the life of Sri Aurobindo, pivoting on his indomitable crusade for India's Purna Swaraj and how he established Indian culture on its spiritual foundation.

Post lunch, Dr. Beloo Mehra, Senior Academic Mentor at AuroBharati delivered a talk on the topic 'Women’s Equality and Freedom: Insights from Sri Aurobindo and the Mother'.   Dr. Mehra shared with the participants Sri Aurobindo’s explanation of how the relation between man and woman in Indian society has been governed by the symbolism of the relation between the Purusha and Prakriti, the male and female divine Principles in the universe. A quick mention was made of the Tantrik shakta. Dr.Mehra also pointed out a passage from the Mother where she speaks of two principles of existence in the manifestation – one dynamic and other static, but she clearly explains that the whole idea of assigning one a masculine character and another feminine is entirely a creation of human mind, and that is not the Truth. This discussion helped the participants appreciate the fundamental equality. Time was spent on discussing the concept of Shakti. Some key ideas given by Sri Aurobindo and the Mother in this regard were presented. A few important ideas from some of the essays by Nolini Kanta Gupta were also shared. The session was kept interactive and thought provoking. 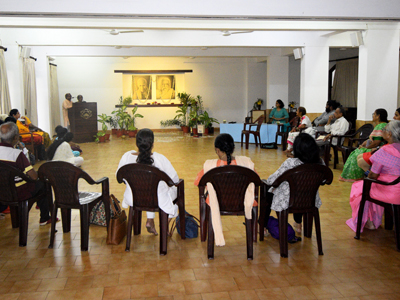 The next session by Gayathri di engaged us to realise the vast difference between Divine Love and Human Love. She read poems apropos to the subject which was very beautifully rendered to make us sense the immensity of the encompassing Love from the Divine and how when it descends into human relations becomes an evanescent emotion. This spark of love in every being must transcend into a steady flame of harmony and peace.

The day ended with a yoga session by Shweta where she demonstrated several asanas and concluded the session with 'Chetana Jagruthi'. Through this process one became aware of the inner and outer states of consciousness simultaneously and gradually developed the ability to integrate all the parts around the core of one's inner being.

The second day's sessions commenced with the Awakening of the body, Invocation and Vandhanam' Dr. Arati presented 'The Five dreams of Sri Aurobindo' in a compendious manner. The aspects of his dreams are vital, need of the hour and the key point ‘Individual perfection and a perfect society’ is the ideal to be realised in the coming times. It is entirely up to each individual to perceive a brighter future for India and humanity and also to act upon it passionately. The foreordained union of a present disorganised human society is inevitable by the pressing circumstances for change. What is decreed by a Supreme Law and Will shall be manifest and all of humanity will be transformed by that power.

Dr. Mollika Ganguly gave an elaborate lecture on food and sleep and how making some conscious changes can enhance the lifestyle of an individual. She also discussed what the Mother had said about sleep and its significance. There was a group discussion on taking small steps to make these changes possible in our daily lives so that one does not go back only with information but also feels empowered with the means to follow it after the programme. 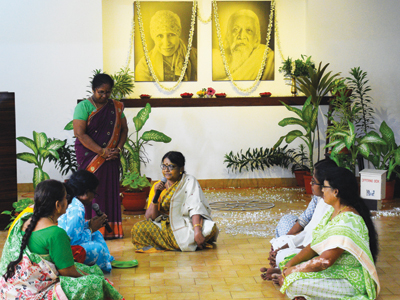 After lunch, there was an interactive session with Dr. Alok Pandey followed by questions and answers asked by the delegates and all the questions were replied with meaningful and deep insight. The questions touched upon the subject dealing with diverse human nature. He also explained the difference between oneness and sameness and the value and utility of traditional worship.

Sushanto da presented the topic "Dynamic meditation”, based on what the Mother has spoken on Dammapada — to observe, to watch over, to control and finally to have mastery over our thoughts which is otherwise capricious unless exercised.

And like the previous day, there was a yoga session by Shweta as the concluding part of the day.

The final day opened with the regular physical awakening, Invocation and Vandhanam as usual. 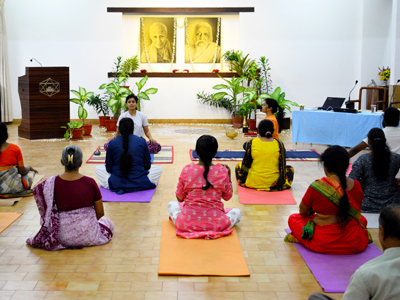 The poem 'Who' by Sri Aurobindo came to our light as PPT by Sushanto da, an artist, has made beautiful paintings for the divine lines. The poem kindled our soul and made us to wander in search of the Divine, who is the creator as well as the slayer.  A very simple easily understandable poem but with such profundity to delve in.

This session followed by Arnab da , a musician  lead us to question  ‘Who am I?- I am that’ . When we were pondering on the question, Seva played on violin which had a tint of pathos, denoting the grief of human wandering on who am I and immediately the flute by another musician accompanied in an ascending manner – expressing the great truth if human ascends he will realise the Divine . This was a scintillating experience as tears rolled on my cheeks as the divine music replied I am in you and you are in me.

Dr. Kishor Kumar Tripathy, member secretary, AuroBharati, spoke on ‘Mantra Chanting : Symbolism and its Integral Approach.’ The session was divided into two aspects, i.e. theory of the mantras and practice of mantra chanting. Mantras were created by the sages and seers through deep meditation as the eternal spirit of nature. The spiritual Purusha, the Supreme Spirit is the teacher who gave the knowledge of the mantras to the human being. Speaking on ‘mantra chanting’, he said that mantras can be recited in repetitions. When we chant the mantras with utmost devotion, we realize powerful vibrations within the body and mind. Chanting of the mantras can be used to evoke different states of consciousness to harness the power of intentions and a deeper state of awareness. The session was followed by demonstration of mantra chanting of selected Suktas from the Vedas, Bhavani Ashtaka and the Mantra of Maharshi Aurobindo.

The cultural programme performed by the delegates was very heartfelt. The Chengalpattu Sri Aurobindo Society branch devotees presented a couple of skits, songs and we, a small group, contributed a song on the Mother.  Many delegates narrated slokas, narrated sanskrit stories and lines from Savitri.

The day ended with 'Chetana Jagruthi. But our mind, body and soul had a great awakening all the three days and gained knowledge as we tasted a drop of nectar of the Divine.