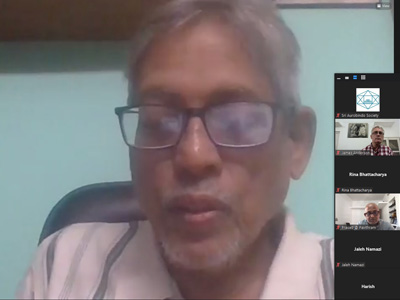 The programme was organised by NAMAH, the Journal of Integral Health from 12th - 17th September 2022 with an aspiration to share the relevance and impact of occultism on the practice of Integral Yoga. The sessions focused on how occultism can help in deepening the understanding of psychology and spirituality and its effect on our health and well-being, which is often overlooked. Dr Soumitra Basu shared how a Consciousness-based approach does not dismiss occultism as a taboo subject, but rather explores it in detail to discover the interaction between supra-physical and bio-psychosocial substrates. The programme provided participants a space to understand the phenomena through a whole new perspective. 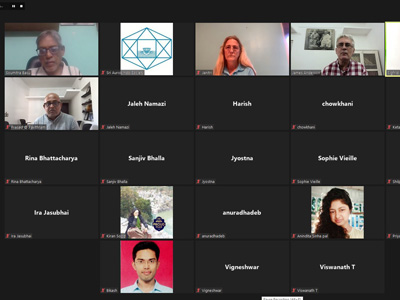 Dr Basu began the first session on ‘Introduction to Occultism, relation with Psychology and Spirituality’ by sharing an anecdote from his life and how he got introduced to the study of occultism. He explained all the key terms like mysticism, occultism, spirituality and how they are often mixed together. As the session progressed, participants learnt about the different evolutionary and non-evolutionary worlds and their influence in life. Dr Basu emphasised on the fact that Sri Aurobindo recommended the interaction model of occultism which has place for the simultaneous presence of biological factors when mental health is looked at from the lens of occultism. The session ended with a discussion on origin of occult forces with a clear distinction between lower occultism (black magic) that sharpens the ill-will and higher occultism that can bring down the light through sadhana and is practiced as white magic.

The second day of the programme was on ‘Gradation of occult worlds. Understanding Hitler, Stalin and UFOs’ wherein Dr Basu began the session with discussing the play of occult forces in suicide and how when the will-power of the individual breaks downcompletely, the negative occult forces take over and drive the individual towards committing suicide. He further shared the influence of negative occult forces in cases of murder and accidents.The session progressed with Dr Basu sharing about the play of occult forces in World War II and that The Mother considered Hitler as a weak-minded and sentimental person who was periodically possessed by a vital entity and Stalin as “a direct incarnation of the vital world”. Also, while discussing the role of mythology in understanding UFO, Dr Basu echoed the thoughts of Michael Miovic which states that “there might be no physical evidence of UFO‟s and aliens but they may have been produced by interactions of spiritual dimensions and the material world.” Such interactions are the basis of allancient mythologies, Greek, India, etc. The session ended with a powerful statement shared by Dr Basu - Fearlessness is the basic requirement to enter the occult worlds. 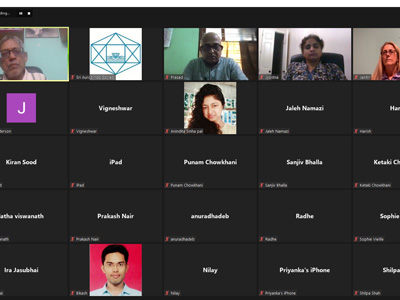 Illness’. Dr Basu started the session with talking about two ways of solving any problem; one is working at the same level to solve (working with dark forces to counter dark forces) which is more prevalent at the lower end of the hierarchy in the occult world and the other is working at a higher level to solve (working with Light to counter the dark forces) which is the method of the yogis. The session further progressed in the direction of discussing the nature and characteristics of hostile forces; anti-divine forces that are different from the elements of imperfection in the ordinary human nature that belong to the realm of psychology. Dr Basu also illustrated certain case studies of patients under the influence of occult forces. Making positive mental formations and motivating patients to open to higher spiritual forces among others were the few guidelines shared at the end of the session for dealing with patients open to occult interventions.

The fourth session was based on the topic ‘Hostile forces in the cosmic consciousness’. Understanding the phenomenon of True Possession’ which began with discussing the different aspects of nature (visible and invisible) and the difference between gods and asuras. Dr Basu reiterated the points discussed earlier about white and black magic and the difference between evolutionary and non-evolutionary planes. He also explained Sri Aurobindo’s psychological framework and the interplay of hostile forces and cosmic consciousness. In the end, he shared that the support of psychic being is required to protect the inner being and the key to protect oneself from the hostile forces is to work Integrally (simultaneously work on different levels).

The fifth-day discussion was dedicated to the topic ‘Occult influences in children’ and Dr Basu shared few case studies to demonstrate the effect and also the remedy to be free from the influence of occult forces in children. He further spoke on the guidance Sri Aurobindo has laid down for parents to deal with occult influence and the possibility of three eventualities and the remedies to overcome them. The session came to a close with Dr Basu sharing three suggestions for a therapist to venture into occult realms; development of self-mastery, an optimal level of purity- egolessness and to cultivate fearlessness.

The last session was titled ‘Higher or True Occultism : working through occult forces’ in which Dr Basu shared with the participants various ways of obtaining protection from Light above and not powers below through certain mechanisms; not to have fear of death, concentrate on the true vital being, connect with the psychic being and concentrate between the eyebrows, to name a few. The session ended with participants sharing and Dr Basu highlighted the greatest utility of Yoga is the power to watch the poise of nature   poise of purusha.

This continuous six-day exploration of different aspects of occultism was well received by the participants. Easy reference and sharing of case studies by Dr Basu helped them understand the complex concepts with ease and gave them an opportunity to widen their perspective. The methods and practices discussed throughout the sessions and specially the ones shared during the last session, gave participants some practical ways to protect themselves from the influence of negative forces around them.

“A dawning realisation that these occult forces are indeed at large as attested by a man of scientific understanding like Dr Basu and his numerous efficacious tips on how to protect ourselves from them.”

“It was a difficult subject to grasp, but surely I'm well informed now. And definitely will work on the teachings.”

“It was interesting to discover that there are so many hidden factors influencing our life.” Knowing more about them will help us stay awake and alert in the path of yoga.”

What did you enjoy most in the workshop?

“In-depth knowledge of Dr Basu and how he presents it.”

“The energy and enthusiasm shared by the Doctor in helping us understand this vast subject.”