India as Envisioned by Swami Vivekananda and Sri Aurobindo 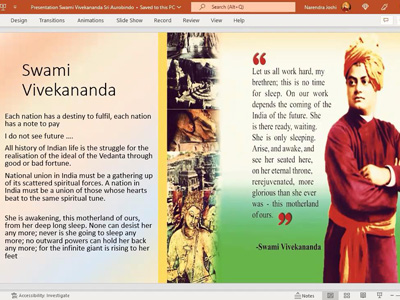 As part of Sri Aurobindo Society’s celebrations of 150 years of Sri Aurobindo and 75 years of Indian Independence, the Renaissance-AuroBharati team had invited Dr. Narendra Joshi to deliver a lecture under the ‘India – Our Mother’ lecture series they have been hosting since last year. The topic of Dr. Joshi’s talk organised on October 16, 2022 was – India as Envisioned by Swami Vivekananda and Sri Aurobindo.

This online lecture, which was also live-streamed on Sri Aurobindo Society’s Facebook page, began with a brief silence to invoke the Divine Mother’s Presence. Dr. Beloo Mehra, editor of Renaissance and Senior Academic Mentor at AuroBharati, introduced the topic by briefly mention the unique and deep connection Sri Aurobindo had with Swami Vivekananda, particularly referring to Swami ji’s ‘visits’ with Sri Aurobindo in Alipore prison. She also made a reference to the deep reverence Sri Aurobindo had for Sri Ramakrishna, and his work in awakening the nation from its state of hypnotism under the onslaught of Western culture. She then briefly introduced the speaker for the day’s event. 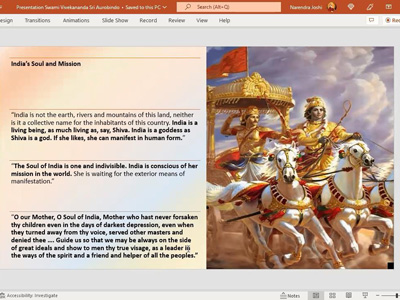 Dr. Narendra Joshi began his lecture by speaking of the deep love and reverence both Sri Aurobindo and Swami Vivekananda had for their motherland and whom they both saw as a living Goddess. He then shared a few selected quotes from various writings and speeches of Swami Vivekananda to bring home this point. Quoting from Sister Nivedita, one of the foremost disciples of Swamiji, he emphasised how his deep love for India coupled with his vision for the nation’s destiny was one of the four pillars which defined the core of Swamiji’s life and work.

Dr. Joshi spent time elaborating upon the point regarding Swami Vivekananda’s profound understanding of the destined work that India must do for the humanity’s future, and how India and Indians must prepare themselves for this future work. He emphasised that in Swami ji’s writings and speeches we find not only his visionary and lofty ideals, but highly practical advice for action. He gave the example of Swami ji’s insights into how patriotism can be inculcated among the youth. 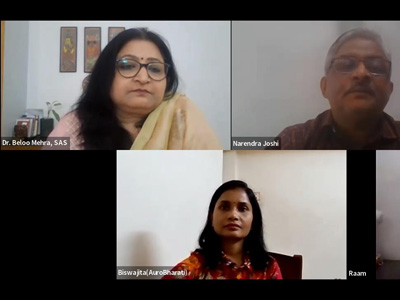 After a brief reference to the connection between Sri Aurobindo and Swami Vivekananda, our guest speaker then spent some time highlighting a few words of Sri Aurobindo which present his profound vision for the future of India as well as India’s role in the future of the world. Dr. Joshi highlighted the parallels in the way these two seers of modern India continue to awaken the nation’s youth to the true spirit of Indian culture and inspire them to work toward making India a spiritual leader of the humanity.

Dr. Narendra Joshi reminded that both the seers emphasised that in order for India to fulfil her destiny, we the children of Mother India have to first become Indians in our very core. This ‘becoming Indian’ is not merely about a pride in all things Indian – though that could be a start – but it necessitates our persistent aspiration for the seeking of our true self, the divine within, while fully engaged in life and world without. This life-affirming spirituality as the basis of life and its perfection is the core of India’s message which we must first realise and live, before we can take this to the world. 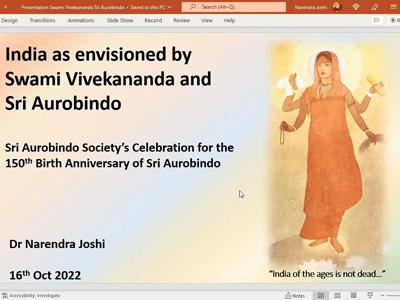 The event concluded with some insightful interaction with a few of the session participants.

Some feedback from the participants: 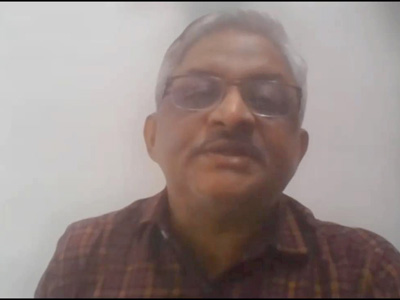 A researcher, writer, editor, artist, illustrator, orator, and counsellor, Dr. Narendra Joshi is passionate about areas such as Indian Culture and History, Swami Vivekananda's Works, Human Unity, Science and Spirituality, Consciousness Studies, Creativity and Integral Psychology, Indian Philosophy. He has a PhD in Sri Aurobindo Studies from Hindu University of America, Florida, which was offered in collaboration with SACAR (Sri Aurobindo Center for Advanced Research), Pondicherry.

Dr. Joshi has served in the capacity of Project Director for SACAR. He was also a Research Scholar with Vivekananda Kendra Institute of Culture, and has had a long association with Vivekananda Kendra, Kanyakumari, and also their chapters in Assam and Arunachal Pradesh. He was the Project Coordinator in Northeast India. 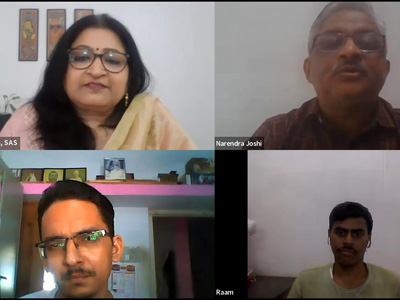 Dr. Narendra Joshi also holds a Masters’ degree in Manufacturing Engineering from University of Mumbai, Mumbai. He has held the positions of Principal of Fr. Agnel Technical College in Mumbai, and also an Assistant Professor at Fr. Rodrigues College of Engineering, Mumbai.

At present, he serves as the Project Director, Jana Seva Kendra, Vivekananda Prabodhini, Mumbai & a Guest Faculty at Auro University, Surat. He is also closely associated with Vivekananda Kendra, Kanyakumari and Maharashtra, and is heading a project 'Swatantra Bharat 75' which features a series of expert lectures and online courses.