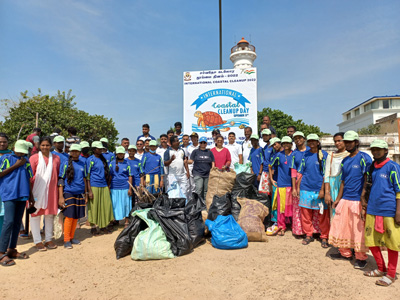 This campaign aimed to create a mass behavioural change among the public by raising awareness of plastic usage that destroys marine life. After the inauguration, the English Access students collected their cleaning kits and picked up trash on the beach.  The Cultural Affairs Officer and the Education and English Language Outreach Coordinator also joined the students in the beach-cleaning process.

Students cleaned the beachfront at various checkpoints, collecting non-degradable materials like plastic and degradable materials like paper and wooden objects.  They segregated both materials in order to send them out for recycling.  Students enthusiastically participated in the cleanup drive and learned the value of not discarding trash at the beach.  They successfully collected more than a hundred kilograms of trash at the drive.  They also pledged to be conscious of the environment and maintain the habit of being responsible for the trash they produce. 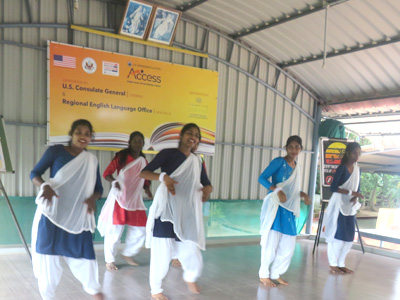 During his afternoon visit, he met SARVAM’s Chairman, Shri Vijaibhai.  Mr Scott discussed the current programme and the plans for the future.  The meeting went exceptionally well.

On the second day of his tour, Scott E. Hartmann, The Cultural Affairs Officer, U.S. Consulate General, visited Satyam Training Centre and interacted with all the Access Students and Access Teachers.

Access students performed many cultural events during his visit.  They included songs, dance, skits and speeches.  Mr Scott E. Hartmann also interacted with all the students, shared many valuable inputs, and encouraged them to learn English successfully. Detailed report of the second-day programme

Cultural Events: Mr Earnest Paul delivered the welcome address.  Ms Adhavapriya introduced the Cultural Affairs Officer, and Mr Hartmann then addressed the group of Access students.  He expressed interest in witnessing everything the students had planned for the occasion.  Students first sang a traditional American group song, “She will be Coming Around the Mountains.” Two of the Access students then gave beautiful speeches outlining the importance of beaches, including a list of their various uses and some of the world’s most well-known beaches.  Next, they performed a skit set in a futuristic world where robots replace human teachers, and all books are electronic.  The powerful message behind the skit and the students’ impressive dramatic skills captivated and thoroughly entertained the audience.  They then sang a group song, “Give me Freedom,” leaving everyone with a feeling of inspiration.  It was followed by another speech, where the student spoke about the serious issue of plastic pollution harming the marine ecosystem.  The cultural performances came to a close with a beautiful, synchronised group dance number by the Access students. 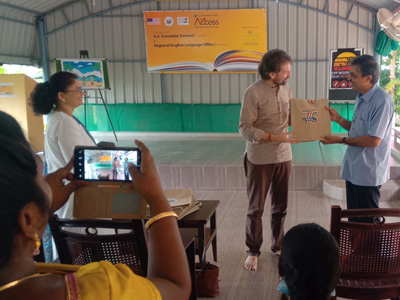 Interaction with the CAO: Towards the end of the program, Mr Scott Hartmann took time to sit with the students and allowed them to interact with him.  Students asked several intriguing questions in order to get to know him better.  He shared some of his exciting anecdotes.  He also talked to the students about his valuable experience as a Cultural Affairs Officer.  They learned a lot from their interaction with Mr Hartmann.

Mr S. Barnabas gave the vote of thanks for the ceremony and thus concluded the celebrations of the day.  Before leaving, Mr Scott Hartmann and Ms Brindha Balachandran took a group photo with all the Access students.  Throughout the day, students displayed their artistic talents in various ways with so much enthusiasm and confidence.

The program ended with a positive note and with happiness.