A 2-day visit and interaction with teachers of Dr. M.S. Udayamurthy School of Excellence 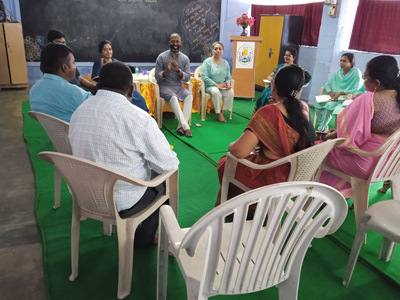 The SAFIER team of Shivakumar and Priti visited Dr. M.S. Udayamurthy School, Namakkal, and interacted with its teachers of Pre-primary, Primary and Secondary level on Integral Education, on 29 & 30 August 2022.

Shivakumar and Priti introduced the basics of Integral education through Awareness games and Art activities, after the group had a look at the current educational system and its inadequacies.

The interaction with the teachers handling Secondary Classes started with each teacher sharing the activities that were done in their classrooms. In order to have a look at the current education system, a discussion was taken up by Shivakumar to reflect upon ‘How important is what we teach, to the students?’ and ‘Why do we teach what we teach?’ 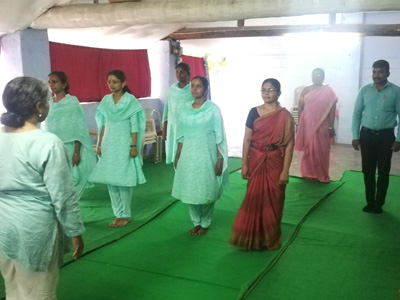 A strong foundation is essential for developing all aspects of a child's personality. The beginning of the discussion marked the importance to gradually enable the freedom for students to choose their teachers, subjects, and activities and frame their timetable with a system that helps them in academics, physical, emotional, mental and spiritual development. These practices eventually help students to acquire knowledge of themselves and nourish the right attitude to address real-life problems.

An activity was facilitated by Priti where the participants walked at different speeds, becoming aware of their posture and also with eyes closed. The participants became aware of what happened when they walked with attention, they became alert of their posture and became more aware and in control of perfecting the simple act of walking.  A home practice was given to them to practice alertness in whatever they did after going home and notice what happens within them. 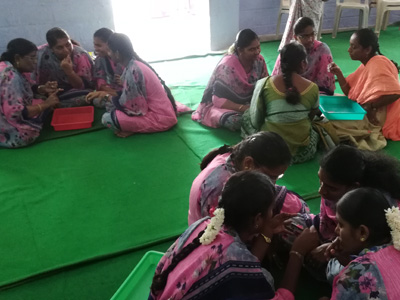 The discussion with the pre-primary and primary teachers started with them sharing their classroom practices. They were then asked what would the children in the age group of 4-8 years like to do if they were given a free choice. Many of them said that the children would immerse themselves in play, and would love to be outdoors with nature and play role-play games with each other.  Thus, in order to introduce Integral Education, an activity session was taken up where it was demonstrated how an Integral Education activity is taken up with the children keeping their choices in mind. The teachers were divided into three groups for collecting leaves, flowers, soil, sand, dried parts of plants, and stones from Nature. This activity was to be done in conscious silence. Keeping silent and being attentive to how they were plucking the leaves and flowers or collecting the material, the teachers came up with beautiful designs of Kolam and decorated them with the materials they had collected in a very creative way. Later the participants shared their experiences and feelings of how doing the activity in silence and being with nature was a very special experience and how they felt happy within. The participants were amazed at this beautiful breakthrough of creative expression and beauty, and also that there are so many ways one could make kolams. 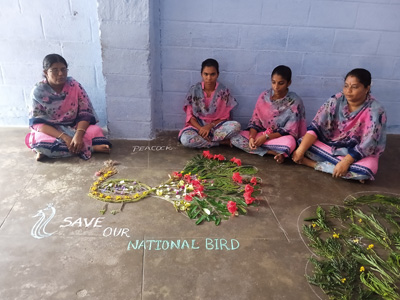 Sivakumar and Priti concluded the introductory workshop with an aspiration to walk on the path of Integral Education by the teachers which would promote the physical, emotional, mental and spiritual development of not only the children but also the teachers.