Celebration of Mahashakti and workshop on Carnatic Music 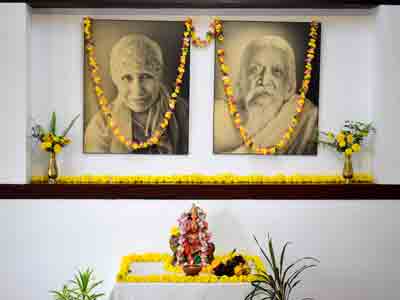 Vijaya Dashami is a major festival celebrated at the end of Navaratri every year and the nine forms of Maha Durga are considered to be a symbol of victory of good over evil. The nine-daylong festival is dedicated to the worship of the nine avataras (forms) of Goddess Durga,  “First, the daughter of the mountain; second the one who moves in Brahman; third the delightful sound; fourth the seed of incubation on earth; fifth the mother of Skanda; sixth Katyayani, the eternal virgin; seventh the dark night; eighth the great white one; and ninth the one who grants perfection.” The celebration started with the worship of Goddess Durga with chanting of Durga Stotra (by Sri Aurobindo), Saptashloki Durga Mantra, Mahisasuramardini Stotra and a chapter from SriDurgaShaptashati. 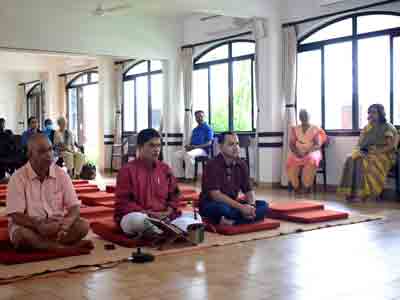 On this occasion, a workshop on ‘Carnatic Music’ was organized with the objective to focus on the subtle Shrutis and their exploration in Indian Music through the Compositions of great Vaygeyakaras. Speaking on the occasion, Dr. Kishor Kumar Tripathy, Member Secretary, AuroBharati, Sri Aurobindo Society said about the various activities undertaken by AuroBharati including project on the popularization of Indian Music. The workshop was facilitated by Dr. P.V. Bose, Principal of Bharathiar Palkalaikoodam, (Bharathiar Centre for Performing & Fine Arts), Puducherry. He spoke about the various subtle nodes and the mystical form of music ‘form needed to know the formless.’ During the interactive session, he mentioned about the essential qualities for the practitioner including pitch perfection, ability to express a variety of speeds and gatis, voice culture, listening skills, knowledge of theory and practical aspects of music and creative self-expression for better performance. 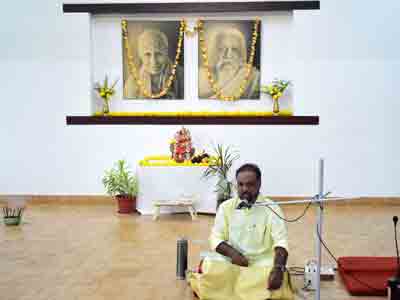 Ganesha. A brief Alapana was given. The second was again by Muthuswami Dikshitar in the raga Amritvarshini with Aalapna, Kalpana swaras. The third composition by Shri Tyagraja in the Raga Basant Bhairavi, Aalapna with Kalpana swaras. The last performance was a small song by an unknown author composed in Shyamala Raga. The Cultural program was organized by Dr. P.V.Bose, Principal, Bharathiar Palkalaikoodam with accompanying artists Dr. L. Annapurna, HoD, Department of Music,  Mr.T. Srinivasan, Assistant Professor (Violin) and Dr. V. Shiv Kumar, Assistant Profesor (Mridangam). The workshop was well attended by music lovers.

Mother Durga! We are thy children, through thy grace, by thy influence may we become fit for the great work, for the great Ideal.

Mother, destroy our smallness, our selfishness, our fear. 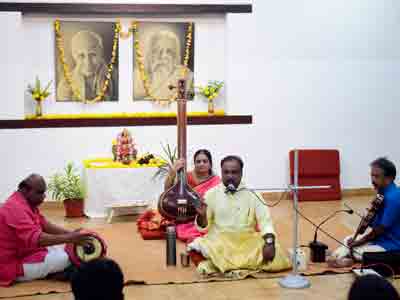 About the facilitator: Dr. P.V.Bose was initiated into the Carnatic classical form of music at the young age of eight. Veteran musician Kunnamkulam Shri David Bhagavatar introduced him to the basics of this discipline and helped develop his sensibilities and creative energies in this direction. He completed Post Graduation in Music, MPhil (Music) and PhD with honors from the University of Delhi, India where he matured as an artiste of high caliber under the expert guidance of Padmashree Prof: Leela Omchery, Padmavibhushan Prof: T.N.Krishnan and Prof: T.R.Subrahmaniam. He has also been well-received as an Academician as he gave en number of Lectures and Lecture demonstrations on Indian Music in various Universities and colleges in India abroad. As a play back singer, he has sung for more than 20 movies in Telugu and Tamil. Many audio albums composed and sung by him have been released by various leading recording companies.