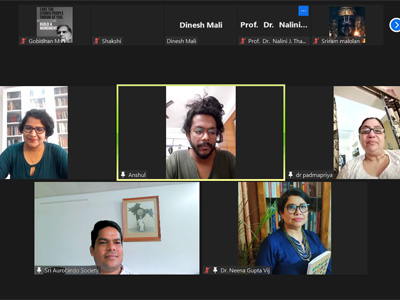 AuroBharati, Sri Aurobindo Society under its series on “Indian Culture & Heritage” organized a lecture on the topic Indian Culture and Folklore: Research & Pedagogy by Prof. Nandini Sahu on 10th September 2022.

Dr. Kishor Kumar Tripathy, Member secretary, AuroBharati, Sri Aurobindo Society introduced the speaker and told that Folklore as a part of Oral Traditions transmitted orally from one generation to another in the form of folktales, sayings, stories, ballads, songs and chants. Indian Culture refers to the long history of concepts, ideas, thoughts and beliefs which was expressed in a very ethnic and simple manner. India’s wealthy heritage signifies the role of folklore as an important part of human interactions which has an extensive variety of comprehension and meanings. He mentioned the thought of Sri Aurobindo  in the context of epics, where he specifically speaks on legends and folklore in his writing, The Renaissance in India Other Essays on Indian Culture  “These epics are therefore not a mere mass of untransmuted legend and folklore, as is ignorantly objected, but a highly artistic representation of intimate significances of life, the living presentment of strong and noble thinking, a developed ethical and aesthetic mind and a high social and political ideal, the ensouled image of a great culture.” 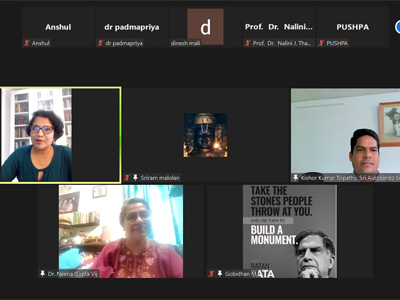 Speaking on the occasion, Prof. Nandini Sahoo said that The study of folklore has emerged as an area of critical concern in contemporary literary research and pedagogy as a key feature of  marginal studies. It has been widely used by the academics, policy planners, researchers, and critics to study the origin of a group who are deprived of the term ‘mainstream’. The study of culture and folklore is rich with research and pedagogy on  literature, languages, music, songs, dance, theatre, art, food, ornaments and unique life styles—and this has caught the attention of us modernists. Focussing on teaching, learning, research and dissemination activity, she emphasized on interdisciplinary, cross-disciplinary, multidisciplinary and transdisciplinary research with special reference to critical concerns in contemporary literature. She told about the narratives in the literature inclusivity and explicitly of Indian Culture by giving examples of the Baul Songs of West Bengal, Rudali Songs, and the writings of Gurudev Rabindrnath Tagore. 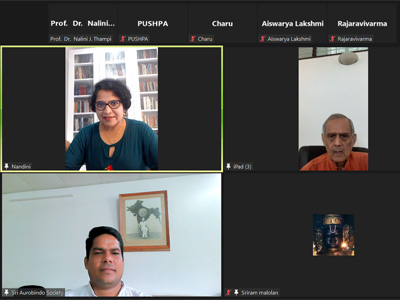 Highlighting the complex and collective process of folklore studies, she said that Folklore studies, indeed, is a complex and collective process and it has a continuity with the past and connection with the present—it is timeless as well as temporal. The oral-written continuum of folklore and the politics thereof has been my ‘tension’ in this research. She addressed the pertinent question in academia and in higher education--why folklore and culture studies are imperative in research and pedagogy? She emphasized specific issues on this subject including Interdisciplinary research and Folklore vis-à-vis Literature, Anthropology, Gender Studies, Ethnomusicology, Linguistics, Psychology and Performance Studies, folklore and culture studies as Knowledge Production, Folklore and culture--Historical Perspectives, Storytelling/folktales as a pedagogical method, use of Technology in archiving and documentation.

Her lecture also covered many important aspects of folklore studies including Indian rationale from Sanskritic, Persian and Native Ethnicities. folklore, Flexibility and Inclusivity and folk as alternative epistemology and the need of folklore studies in higher education system. The lecture was organized through online mode followed by an interactive session with the participants. She emphasized folklore and cross-cultural studies as a medium of connecting cultures.

The lecture was followed by significant discussions by the participants of the lecture. Prof.Nandini Sahu, Amazon’s best-selling author 2022, Professor of English and Former Director, School of Foreign Languages, IGNOU, New Delhi, India, is an established Indian English poet, creative writer and folklorist. She is the author/editor of seventeen books. She is the recipient of the Literary Award/Gold Medal from the hon’ble Vice President of India for her contribution to English Studies. Her areas of research interest cover New Literatures, Critical Theory, Folklore and Culture Studies, Children’s Literature and American Literature.