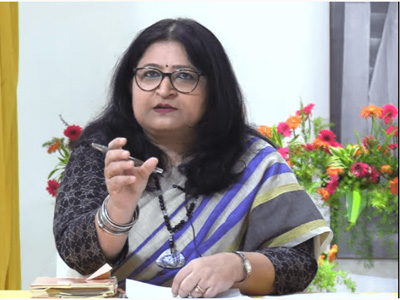 Watch the recording of the talk here.

As part of its celebrations of 150th birth anniversary of Sri Aurobindo, Auroville Foundation and Ministry of Culture, Government of India organised a 5-day programme called ‘Integral Yoga Week’ which aimed to highlight a few essential insights from some of the key works of Sri Aurobindo. The programme was hosted at Sangam Hall in Savitri Bhavan, Auroville. 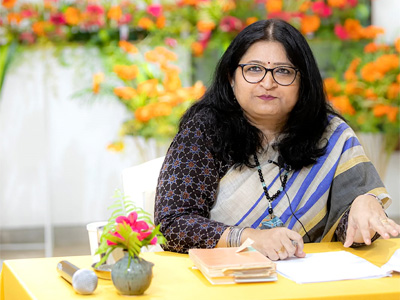 On September 8, Dr. Beloo Mehra from Sri Aurobindo Society was the invited speaker. She shared some thoughts on the overall significance and place of Sri Aurobindo’s social philosophy in his overall Integral Philosophy and vision for the future of humanity. Pointing out the main concerns and limitations of modern sociology in general, she highlighted what is unique and fundamentally different about Sri Aurobindo’s social philosophy – namely, its focus on understanding the essential nature of a society and its evolutionary march toward its destiny.

Dr. Mehra also gave a brief background of The Human Cycle – his main work on social philosophy, which was first serialised in Arya between August 1916 and July 1918 under the title ‘The Psychology of Social Development’. She shared some words of Sri Aurobindo which help us get a very clear picture of how he understood the necessity of expounding on this aspect of his Integral vision for the humanity’s future. These passages, Dr. Mehra said, help us get a good understanding of the deeper significance of Sri Aurobindo’s social philosophy. 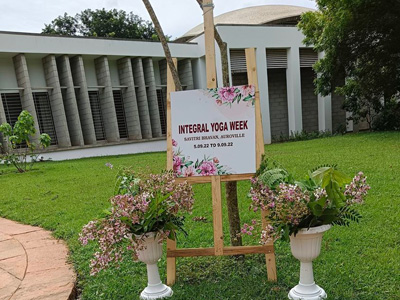 Dr. Mehra also presented a brief outline of the key ideas discussed in The Human Cycle particularly highlighting the evolutionary stages of a society from infra-rational to supra-rational. She pointed out some key insights that can be gleaned from Sri Aurobindo’s integral social philosophy with regard to human and social development, as well as the relation between the individual human development and the place and role of society. She shared a few pertinent passages in this regard from The Human Cycle and The Life Divine.

Relevant and contemporary examples from India and across the world also were used to explain certain points, and also to point out how Sri Aurobindo’s social thought  helps us understand the deeper movements behind the outer phenomena in contemporary societies.

At the end of the talk, the audience interaction brought in a few additional points about spiritual seeking among the youth and the nature and place of education in a future society as per Sri Aurobindo’s vision for the future humanity and society. The event was also livestreamed on the YouTube channel Auroville RadioTV.

The programme concluded with a lunch at the home of the event coordinator, Ms. Uma from Auroville.