The Spiritual Foundations of Arts in Asia 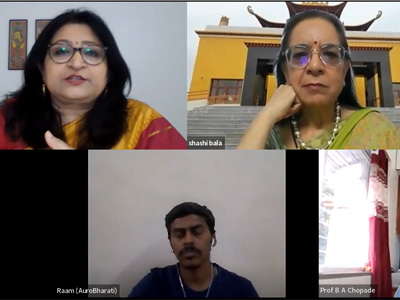 Watch the full recording of the session here.

As part of our ongoing celebrations of the 150th birth anniversary of Sri Aurobindo and 75th year of Indian Independence, the Renaissance team of AuroBharati hosted an online event which featured an illustrated talk by Dr. Shashibala, a noted Indologist and presently the Dean of K. M. Munshi Center of Indology at Bharatiya Vidya Bhavan, New Delhi.

This talk was part of the series 'Reawakening the Bharat Shakti: Toward an Indian Renaissance.' The events hosted under this series are in many ways inspired by the rich and wide-ranging content that was featured in AuroBharati's exhibition on Bharata Shakti, researched and curated by Dr. Beloo Mehra (see report here). 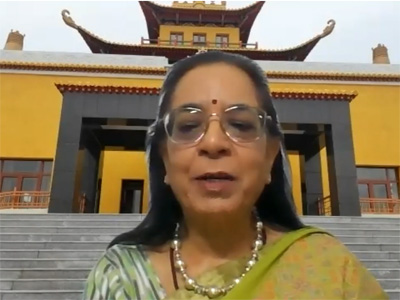 One of the themes featured in the exhibition was about the spiritual basis of Indian art, and another theme was about the reach and influence of Indian culture and civilisation on rest of the world, particularly Asia. The special lecture organised on September 3 synthesised these two themes. Indeed, it is well documented how India's cultural soft power has had a significant impact on civilisations across the world, particularly in Aisa -- in various intellectual and creative domains -- from literature to science, from philosophy to arts, from astronomy to medicine, and more.

The event began with a brief silence to invoke the Divine Mother's presence. Dr. Beloo Mehra then welcomed the guest speaker and the participants who joined the Zoom session. She introduced the topic by reminding everyone of the second dream of Sri Aurobindo in his famous message of 15 August 1947 which speaks of the resurgence of the peoples of Asia and her return to her great role in the progress of human civilisation. She pointed out Sri Aurobindo's emphasis on the role India has to play in the Asian resurgence. 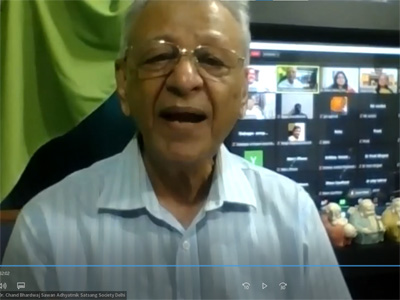 Speaking of the role India has already been playing for thousands of years in shaping the cultural uniqueness of Asia, Dr. Mehra referred to Sri Aurobindo's description of the triune nature of Asian civilisation - "predominatingly spiritual, complex and meditative in India, predominatingly vital, emotional, active and simplistic in the regions of the Hindu Kush and Mesopotamia, predominatingly intellectual, mechanical and organised in the Mongolian empires. East, West and South had their widely separate spirit and traditions, but one basis of spirituality, common tendencies and such commerce of art, ideas and information …., preserved the fundamental unity of Asia." (CWSA, 12: 391) 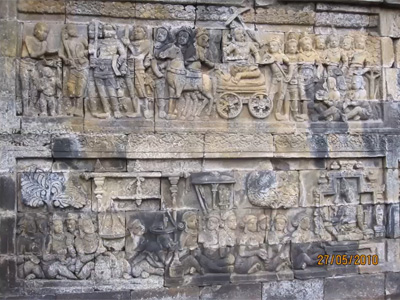 Dr. Mehra pointed out that this special illustrated talk will help us explore how this fundamental unity of Asia also expressed through its diverse artistic traditions. Or rather how art served as a way to unite Asia. She then gave a brief introduction of the guest speaker, Dr. Shashibala and invited her for the talk.

Dr. Shashibala began by highlighting how there is a great thirst today in growing sections of humanity for a deeper, spiritual understanding of life. For several millennia India has been the great repository of higher knowledge and at this juncture that knowledge and that spiritual basis of life which have been the hallmarks of Indian vision and philosophy are being sought after by all those who feel the need to go beyond all that the materialistic-rationalistic view of life and existence can give. She reminded the audience that India's connection with Asian countries goes back to thousands of years, and that scholars and seekers from various regions of Asia used to travel long distances to come to India to study at the famous universities or at the feet of well-known acharyas and gurus. They came to study various subjects ranging from astronomy to medicine, languages like Sanskrit and various sciences and arts. Dr. Shashibala had a rich presentation to show which included pictures representing a variety of artistic traditions from different Asian countries including China, Japan, Vietnam, Thailand, Cambodia, Indonesia, Myanmar and more. Most of these were part of her own collection that she has developed as part of her research work during her several travels to these countries to study their artistic and cultural heritage. She shared how under the influence of Indian culture, particularly around the time when temple building blossomed in India and was greatly patronised and encouraged by Indian emperors and kings, in China also we see a shift from making big tombs to building great temples. 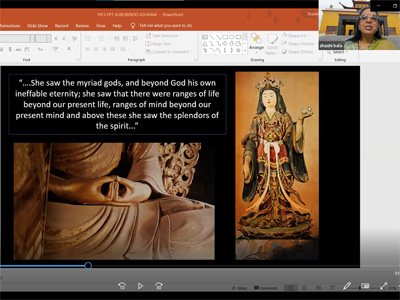 Almost all the prominent temples in most Asian countries were all built on the basis of exact guidance we find in Indian texts concerning temple architecture. Thousands of texts on temple architecture were translated in Mongolian, Tibetan and Chinese languages by scholars, many of whom had studied in India. She pointed out that even the idea of installing the sculptures of divine guardians outside the temples was a practice that came straight from the religio-spiritual philosophy behind the Indian temple architecture.

Dr. Shashibala showed several beautiful illustrations of various temples including some cave temples, and pointed out what was unique about each of them. She also added how appropriate variations were made synthesising the regional aesthetic and architectural traditions and also in consideration to the local geographical and climate conditions. She said how in many temples in various parts of Asia you see a water-body near the temple, indicating the Indian idea of crossing the 'bhavasagar' (ocean of this worldly existence) to reach the Divine. She also pointed out the historical connection of Ayodhya with Korea. 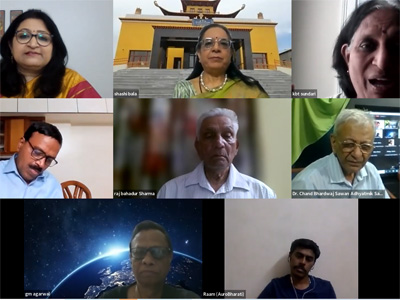 Dr. Shashibala pointed out the role of bhakti when speaking about the widespread practice of painting Buddha and various stories from Buddha's life on scrolls. She spoke of the artists being devotees and seeing their art as their spiritual practice. All of these ideas are fundamental to the Indian spiritual view of art. This way of artistic creation and aesthetic appreciation was widespread in most of Asia at the time, she pointed out, primarily because of the Indian influence.

Our guest speaker also spent time talking about - along with showing several related pictures - the deep cultural influence of Ramayana particularly in countries like Thailand, Cambodia and Indonesia. Some of the pictures such as the scenes of Ramayana carved in a temple in Thailand, and also the Nataraja from Cambodia, dancing Ganesha from Mangolia were captivating. She also showed various representations of Buddha being made under the influence of Indian spiritual philosophy including a thousand-armed Buddha which is influenced by the image of cosmic Purusha in Rigvedic Purusha Sukta. In many Asian countries colossal images of Buddha were built to symbolise the Supreme's Virat Svaroop - another idea borrowed from Indian spiritual philosophy. Dr. Shashibala pointed out that the idea that Wisdom also needs Power as its accompaniment also travelled to other Asian countries. This is reflected through their artistic representations of warriors, and also various gods and goddesses in their warrior forms. Moving on to calligraphy when practiced as a spiritual art, she spoke about how the artist would dip the brush only once in the ink and do the work as a meditation. She showed pictures of a few scrolls where Sanskrit alphabet and its system of seed-sound were the basis to denote Sun and Moon. She also shared images where entire Sanskrit mantras were symbolically presented through calligraphic art. 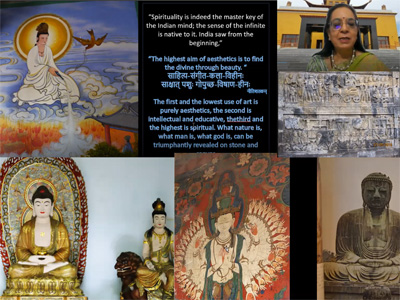 We also had some participants joining us from different parts of the world, including USA, Bulgaria, Italy, and Yugoslavia. There was an enlightening question and answer session toward the end of the session. Suggestions were given on converting the presentation to a small book and collaborating with Sri Aurobindo Society on further building up this project. Another suggestion was made to organise an extensive session at Pondicherry on this topic of Indian cultural influence on the Arts in Asia.

The event concluded with Dr. Mehra thanking the speaker and all the participants. It was also livestreamed on Sri Aurobindo Society's Facebook, a recording of which can be seen here.

Here is some feedback received from the online participants:

This presentation gives a complete tour of Asia… spiritual, cultural and artistic! Superb slides. It is in a way, cultural empire of Bharat.

It is wonderful to see this rich presentation.

Dear sister, thank you so much for lending us true artistic rasa. Congratulations AuroBharati.

Beautiful.... Thank you so much.

Thank you for a very informative presentation.

Thanks for educating and inspiring

Excellent Deliberations. Knowledge and Sadhna, both are being reflected in the presentation. Many Congratulations.

Thank you very much for inviting to such an extensive journey through presentations of Madam Shashibala.