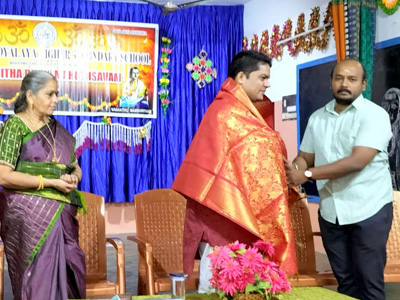 Speaking on the occasion, he said that ancient India was a land of sages, saints and seers as well as a land of scholars and scientists presenting holistic, integral and divine wisdom which is preserved in Sanskrit language. The heritage of Sanskrit has a rich artistic tradition in knowledge, science and technology right from the Vedic period and contributed a lot for the advancement of knowledge system of humanity. This approach has been the foundation to all branches of Indian systems of knowledge including spirituality, philosophy, psychology, mathematics, astronomy, physics, chemistry, medical science, art and architecture etc. 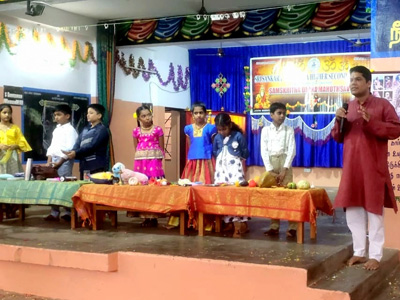 Emphasizing on the cultural heritage of Sanskrit language, he said that the scientific and integral knowledge system preserved in the manuscripts are the treasure of Indian wisdom, by which the intellectual tradition of India can be experimented and experienced. If we really want to establish the glory of this nation, we must give special emphasis for the study of Sanskrit alongwith other languages as well. Language should not be a barrier to the enrichment of knowledge.

He mentioned about the contribution of ancient Indian sciences including Mathematics by Aryabhatta, Yoga and Human Consciousness by Patanjali, scientific study of language by Panini, Science of Surgery by Sushruta, Atomic science by Kanada, Mathematics and Pythagorian Theory by Baudhayana and Aeronautical Science by Bharadhvaja. The knowledge system preserved in the textual tradition reveals the highest and subtlest experiences and symbolically presents the aspirations, inspirations, revelations, intuitions, and integral knowledge systems of India. 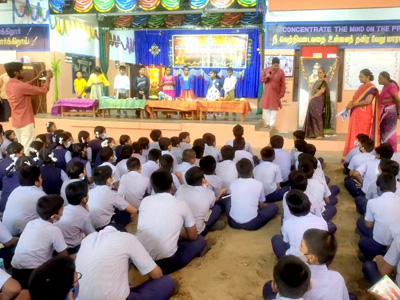 There is a great need to preserve the intellectual as well as the scientific heritage for the enrichment of the knowledge community as well as for the study of the comparative value system of instincts gleaned, largely from its connection with religion, science and philosophy and more specifically for the development of knowledge-based society.

During this occasion, he interacted with the students and conveyed the simple techniques to learn this language.