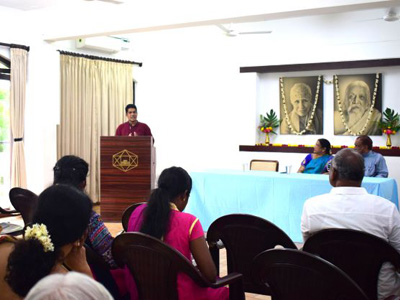 Speaking on the occasion, Dr. Kishor Kumar Tripathy, Member Secretary, AuroBharati, Sri Aurobindo Society said that this celebration marks three important chapters of Indian history.  Azadi Ka Amrit Mahotshav, completion of 75th year of India’s Independence reminds us independence movement of India incorporated by the efforts of Indians involved a wide spectrum of Indian political organizations, philosophies and rebellions and Indian’s emergence as an independent country. The freedom movement of India is considered one of the biggest movements in world history which gave birth of a democratic, republic and a sovereign country. 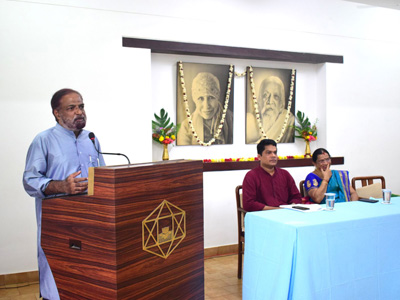 In a time when we are celebrating 150th birth anniversary of Sri Aurobindo, the immortal souls, who considered India as his Mother. Sri Aurobindo, the yogi, seer, philosopher, poet and Indian nationalist propounded the philosophy of divine life on earth. He has given special emphasis on the divinity that would hasten the descent of the Divine into earthly life and transform it into a Divine Life. Mahakavi Subramania Bharati in a short span of exemplary life, he contributed as a freedom fighter, poet, social and spiritual reformer. His contribution to Indian ethos will be celebrated for generations to come. During his lifetime, he not only aroused patriotic fire but touched every aspect of human life through his poems and writings.

Emphasizing the relationship between Sri Aurobindo & Mahakavi Subramani Bharati, the two immortal souls of Mother India, i.e. he said that Maharshi Aurobindo and Mahakavi Subramania Bharati’s interaction added a new chapter in the history of India. Both of them considered “Bharat the Mother,”  they developed the spirit of patriotism, the burning fire of nationalism and fought for the freedom for this great land.

Guest of honour, Dr. Bose, Principal, Bharathiyar Palkalai Koodam, Puducherry and eminent Artist in the field of Carnatic music said that Mahakavi Subramania Bharati, within a short span of time, less than 40 years, contributed so much to the world. Throughout the world, everywhere, his glory is spoken. Some of his songs were composed in a simple manner that even people do not know about. He has not only composed patriotic songs but also devotional songs which can be compared with the songs of Meerabai. He presented some of the songs of Subramania Bharati. 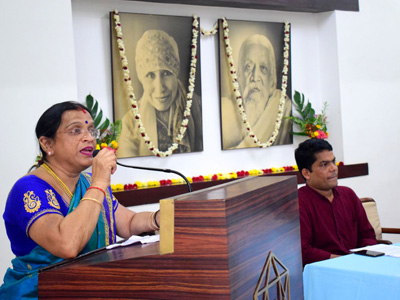 Mrs Radha Srinivasagopalan, the Director of XuFancheng Culture Study Centre, Puducherry was the Chief Guest.  She said, Mahakavi Subramani Bharti lived in Pondicherry for ten years where he has given a significant contribution in many areas. He has given a lot of essence through the immortal words which will be ever remembered by the generations. She explained about the activities uundertaken by the centre for the popularization of the works of Mahakavi among educational institutions so that the message can be reached the millions.

Prof. D.Thiruvalavan, Former Lecturer, Department of Education, Puducherry and Tamil Teacher of  Sri Aurobindo International Centre of Education delivered a lecture on the topic “Contribution of Sri Aurobindo & Subramania Bharati on National Integration.” Speaking on the occasion, he said that it’s a great moment for us to think about two great personalities, who have contributed to the enrichment of humanity. 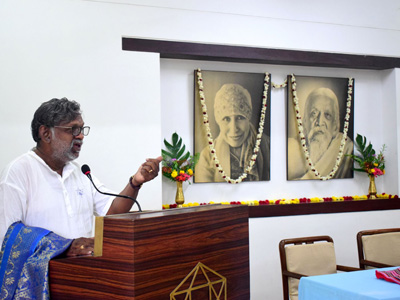 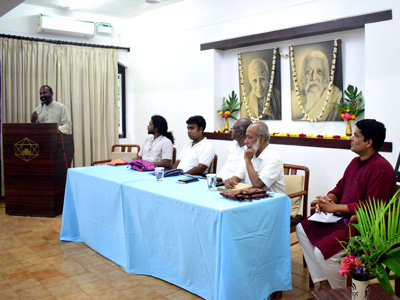 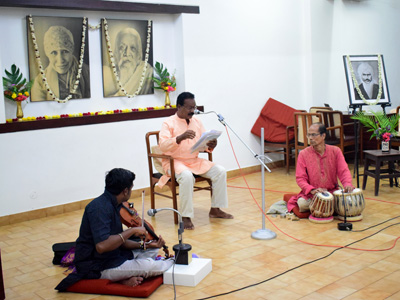 The evening session witnessed a beautiful devotional musical performance by Prof. Dharmu, retired Principal-cum-Professor, Tagore Government Arts and Science College, Puducherry. Dr. Dharmu recited some of the poems by Sri Aurobindo and Mahakavi Subramania Bharati including Kural, who, Vande Mataram, Kaani Neelam Vendum and Jivanmukta. He recited the first chapter of the Kural composed by the poet Tiruvalluvar. Around 1919, Sri Aurobindo translated the first chapter (in a different order from the original). Who, the Poem by Sri Aurobindo written by Sri Aurobindo Circa 1908 – 9. Published in the Karmayogin on 13 November 1909. He recited two poems by Subramani Bharati, i.e. Vande Mataram and Kaani Neelam Vendum ("kaani nilam vendum" especially, a song in which the poet asks the supreme power ( God) to bless him with an ideal home in exchange for his verses). The poetry recitation was completed with a musical performance of the English poem ‘Jivanmukta’ By Sri Aurobindo written in 1934 and first published in the Calcutta Review in June 1934. This poem signifies the characteristics of the Jivanmukta as a liberated soul. 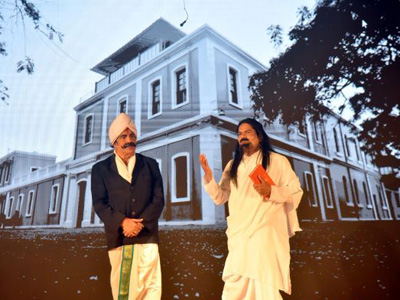 “To one whose soul enjoys for its high possession
Infinity and the sempiternal
All is his guide and beloved and refuge.”
-Sri Aurobindo