Conscious Parenting: Lessons Learned as a Parent, Educator and Healer 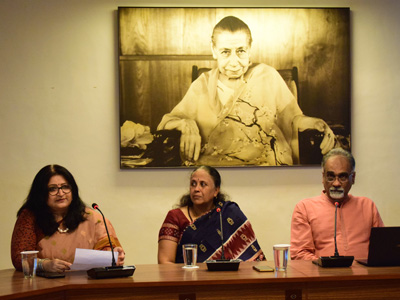 Humanity must become progressively receptive to the light of a greater and higher consciousness, so that it can become a conscious aid in preparing the communal body and mind for the coming of a new race. A conscious change in human birthing and parenting can be an important and undeniable way to enable the creation of a conscious humanity.

Conscious parenting, starting with conscious conception and childbirth, has the potential to transform the essence of the human population in a matter of few generations. For this to happen, we need to have a deeper understanding of the entire process of conscious creation of a being – from pre-conception to pregnancy, from prenatal education to childbirth, and from postnatal care to conscious parenting. 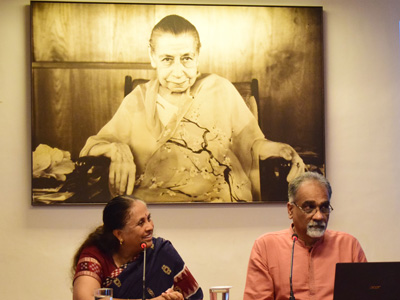 Inspired by this idea, the September 2022 issue of our online monthly journal, Renaissance is focused on the theme of Conscious Parenting. As part of this work, on September 16, we organised a special talk at Sri Aurobindo Society campus. Ms. Jayashree Ashok and Mr. B. Ashok, co-founders of Creative School, Bengaluru were invited to speak on the topic – “Conscious Parenting: Lessons Learned as Parent, Educator and Healer.”

The event began with a brief concentration. Dr. Beloo Mehra then introduced the guest speakers and informed the audience about their professional background and experience primarily in the area of integral education, conscious parenting and healing. 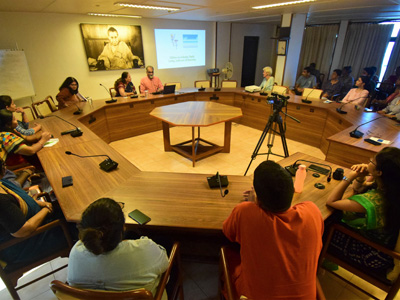 Mr. Ashok opened the talk with a quote from Sri Aurobindo which speaks of the new ideas of parenting that are capturing the attention of large sections of humanity in this subjective age. Expanding on that, Ms. Jayashree said that with new consciousness at work on earth, there is a growing need to understand how parenting can be taken up more consciously so as to work toward the preparation of a future humanity.

Building upon their experience as parents and educators they identified a few themes upon which the guest speakers expanded during their talk. They spoke on the necessity for parents to practice self-care and work on their own conscious development as integral beings because it is through their influence and example, they will shape their children’s growth journeys. 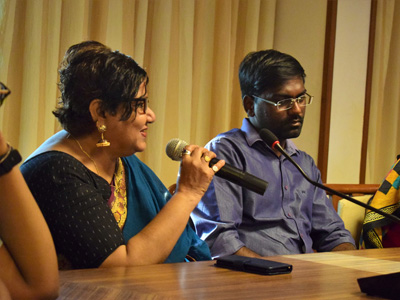 They also emphasised on the way children serve as mirrors for the parents to help them dismantle their egos and egoistic preferences and ideas and prejudices. This, they said, was important for the transformation which is essential for constant inner growth and progress. As parents become more self-aware and gradually gain greater self-mastery, they begin to see their relation with their children also getting transformed.

Throughout the talk, Mr. Ashok and Ms. Jayashree shared several anecdotes from their own experience as parents of two grown-up daughters. They also shared examples from their work with parents at Creative school.  This made their talk much relatable for the audience present for the talk.

The speakers Ms. Jayashree and Mr. Ashok also shared a brief background of Creative School, an institution inspired by the Mother’s and Sri Aurobindo’s Integral Education philosophy and practice. They added that their school is based on the idea that along with children, the integral development of teachers and parents must also be part of the mission and vision of an integral educational experience. This is what led them to start a sister institution Prajñā Living Wisdom Center which works closely in the area of conscious parenting and emotional healing and development of parents and other adults who are caregivers for the growing children. 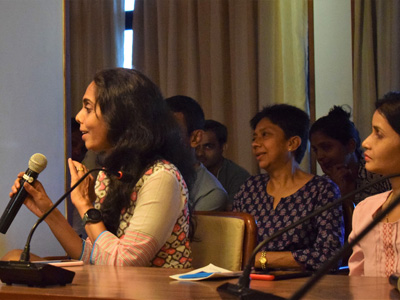 The speakers’ presentation accompanying the talk highlighted some of the key points they made during the session. Appropriate quotes from the Mother and Sri Aurobindo were highlighted to situate relevant points from the talk in the wider context of preparing a conscious humanity.

The talk was followed by insightful interaction with members of the audience who brought in examples from their own parenting experiences. This interaction continued over tea and snacks which gave the audience members another opportunity to go deeper into some of the points brought out by the guest speakers during their session.

This event was part of ‘Reawakening the Bharata Shakti: Toward an Indian Renaissance’ series of events which has been hosted by Renaissance-AuroBharati team to celebrate the 150th year of Sri Aurobindo. Along with the September 2022 issue of Renaissance on the Conscious Parenting theme, this also served as a way to re-launch the Mother’s Glow project – an earlier initiative of Sri Aurobindo Society, which is now a joint project of AuroYajna and AuroBharati.

A recording of the talk will be made available soon on Sri Aurobindo Society’s YouTube channel.