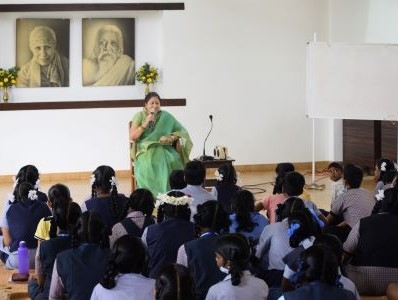 “Childhood is the symbol of the future and the hope of all victories to come.”

Inaugurating the program, Shri C. Djeacoumar, Hon’ble Minister of Agriculture, Women and Child Development said that education is the one and the only factor that will be with us till our end. No relation, parents, friends, and money nothing will continue with us till the end of our life. He emphasized that various skill development initiatives including yogic practices and meditation will be helpful for the integral development of the child. He also told that cleanliness is godliness. He suggested the students to focus on lifelong learning. He also mentioned about the association of his family with the Ashram community. Traditional knowledge systems can be helpful for a better life and lifelong learning will be useful for this as well, the Minister said. 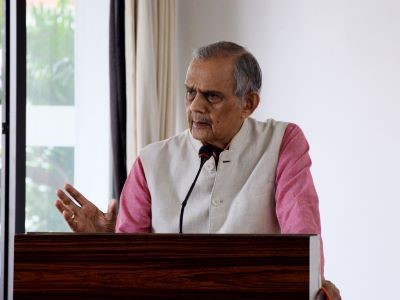 Guest of honour Shri Pradeep Narang, Chairman, Sri Aurobindo Society, Puducherry highlighted the ideas of the Mother about integral development of the child. He mentioned about the book ‘how to bring up a child,’ where the emphasis has been given on child psychology. He mentioned that the parents need to be trained for effective teaching as well as the overall development of the child. He also mentioned that the schools have an important role to contribute for imparting knowledge as well as to provide quality education. He informed about the various initiatives which Sri Aurobindo Society has started in the areas of education.

Dr. Kishor Kumar Tripathy, Member Secretary, AuroBharati, Sri Aurobindo Society spoke about the views of Sri Aurobindo on the child “What is God after all? An eternal child playing an eternal game in an eternal garden.” Highlighting the significance of Children’s Day, he said that on the occasion of the completion of the 75th years of India’s independence and 150th Birth anniversary of Sri Aurobindo, Sri Aurobindo Society has started the project ‘Bal Samskriti: Towards Creativity & Integral Development with an objective to focus on the integral development of the child with special emphasis on nurturing skills through various activities. The second day was divided into three sessions. The session on ‘Creative Expressions’ was facilitated by Kishor Kumar Tripathy. Objective of this session was to recognize how different experiences foster creativity and self-expression through an interactive mode. Speaking on the ‘Musical Tradition of India’, Ms. Shobha Ramesh interacted with the students and taught the methods of Indian music followed by a demonstration of selected mantras. A session on ‘Origami’ was undertaken by MS. Charu Tripathy and Ms. Rathirekha. During the session, participants were taught various techniques for making crafts using the method of Origami.

The third day was divided into three sessions focussing on games, paintings and creative interactions. Charu Tripathy facilitated the session on ‘Traditional games’ with an objective to enhance physical activity, social skills, creativity, imagination, and stimulate growth, physically as well as intellectually. Shri Sushanoda managed a session on paintings. During the session, students were taught how to enhance their painting skills by self-observation and creativity. Beautiful art works on nature, landscape, flora, fauna, portraits, patriotism, and social life were portrayed by the participants. An interactive session with students, parents, facilitators and teachers was also organized during the workshop with the objective to develop potential and overcome barriers for an effective learning and creative experience was also organized during the workshop.

This workshop was from 14th-16th November, 2022. Approximately, fifty students representing seven schools participated in the workshop.