For a full gallery with pictures from the event and a few video clips, click here.

As part of our ongoing celebrations of 150th birth anniversary of Sri Aurobindo and 75th year of Indian Independence, Sri Aurobindo Society through its two verticals – AuroYajna and AuroBharati – organised a special evening programme on August 9, 2022 inspired by one of Sri Aurobindo’s poems filled with the virtue of courage, strength and love for the motherland. The programme titled “Jai Bhavani: Celebrating Sri Aurobindo’s Poem ‘Baji Prabhou’” also marked the first event to be held at the newly renovated heritage building known as Matriniketan, which is Sri Aurobindo Society’s new Centre for Integral Yoga and Indian Culture. 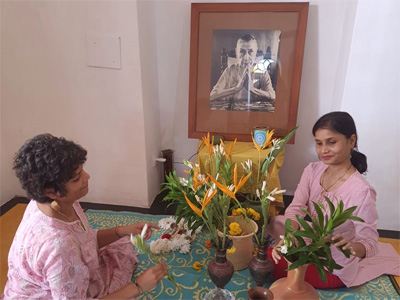 The programme began with a brief moment of silence to invoke the Divine Mother’s Presence. A brief welcome address was given by Ms. Shweta Shekhar from AuroYajna which included a brief history of the building renamed as Matriniketan. Dr. Beloo Mehra from AuroBharati then briefly spoke on the significance of the poem ‘Baji Prabhou’. She then introduced and invited Dr. Shruti Bidwaikar from SACAR to deliver her talk on the topic – The Poetic Beauty and Strength of ‘Baji Prabhou’. 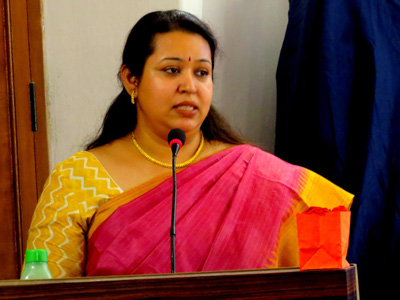 Dr. Bidwaikar gave a brief historical account of the events which form the basis of Sri Aurobindo’s poem. Based on the extensive study and research she has done on this important historical event as well as the literary and cultural representations of this event in Marathi, English and Hindi, Dr. Bidwaikar walked the audience through some interesting and important details – both of the event and the poem by Sri Aurobindo. Situating the specific historical event depicted in the poem in the larger context of the great nation-building work of Shivaji Maharaj and his dream of Hindavi Swaraj, she was able to highlight the significance of the poem even further especially when India is celebrating 75 years of her political independence. Dr. Shruti Bidwaikar pointed out specific lines from Sri Aurobindo’s poem to highlight the spiritual colour this seer-poet has given to the feelings of patriotism and nationalism. She also shared relevant references from other writings of Sri Aurobindo during his revolutionary days to bring out this aspect even more clearly. The talk was deeply appreciated by the audience present.

This was followed by a brief tea-break during which the guests mingled and walked around the beautiful space appreciating its various details. After the tea-break, the chief guest of the evening, Prof. Gurmeet Singh, Vice-Chancellor of Pondicherry University was invited to briefly address the gathering. In his remarks, he emphasised the importance of revisiting such significant moments in our history which have shaped the course of our nation’s march in significant ways.

Dr. Beloo Mehra then introduced and invited Ms. Anjali Bagal from Pune who has choreographed and produced the dance-drama ‘Baji Prabhou’. Ms. Bagal spoke briefly about her inspiration to choreograph this dance-drama on Baji Prabhou. She highlighted her research in Natyashastra and how some key insights from there have influenced her choreography of the dance-drama which primarily expresses the rasa of courage and physical and mental strength. 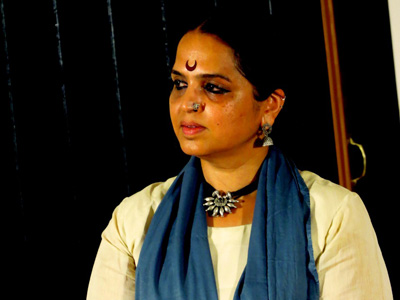 Her group of dancers then mesmerised the audience with their hour-long performance of the poem. Selected lines from the poem were being narrated beautifully in the background, along with some folk music renditions from Maharashtra, specifically Powada. A few pieces from classical Hindustani musical tradition were also part of the overall musical score of the performance. The dancers, dressed simply but beautifully in red garments exuded strength, boldness, fearlessness, compassion, and various other emotions which were part of the poem’s narrative. 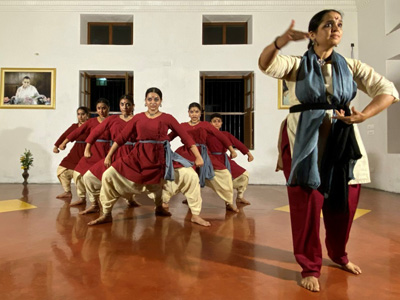 As one scene seamlessly flowed into the next, the audience were sitting spell-bound mesmerised both by the beauty of the dance movements as well as the lines from Sri Aurobindo’s poem. There was a profound silence in the hall when the performance ended, suggesting the deep impact it has left on the hearts and minds of everyone present.

Ms. Shweta then thanked Ms. Anjali Bagal and her troupe for their performance. Small gifts of appreciation were given to all the performers and the speaker. The programme ended with a collective chant of Jai Bhavani, Jai Shivaji and Vande Mataram!

A full gallery of pictures of the event and a few video clips from the dance drama can be viewed here.