Sri Aurobindo’s Exposition of the Integral Foundations of Indian Culture 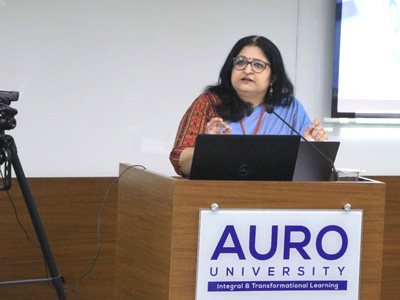 To commemorate the 150th birth anniversary of Sri Aurobindo, a National Symposium on the Life and Works of Sri Aurobindo was organized by the School of Liberal Arts and Human Sciences, Auro University, Surat.

Dr. Beloo Mehra, Senior Academic Mentor, AuroBharati, Sri Aurobindo Society was invited to be the keynote speaker at the symposium. After the ceremonial lamp lighting the symposium was declared open. Dr. Mehra was the first speaker and she spoke on the topic – “Sri Aurobindo’s Exposition of the Integral Foundations of Indian Culture.” 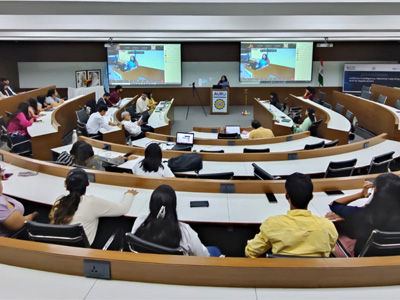 In her talk, Dr. Mehra pointed that Sri Aurobindo’s deep, vast and profound writings on Indian culture are an expression of his inner vision and experience of the deepest and profoundest spiritual truths of Indian culture.  These writings give us not only a penetrating look at India’s glorious past but also compel us to take a hard look at the present state of our cultural fabric and most importantly, show us the direction in which we must move forward for an even glorious future.

Pointing the audience’s attention to Sri Aurobindo’s specific writings compiled under Volume 20 of his Complete Works, titled ‘The Renaissance in India and Other Essays on Indian Culture’ Dr. Mehra said that these essays written in response to senseless attacks on Indian culture by William Archer were not only telling this hostile critic of the deeper and essential truths about India, but also helped the Indians who had been cut off from a deeper knowledge about their culture learn about India’s true place in the collective march of human civilisation, India’s destiny and her role for the future of mankind.  Dr. Mehra added that even a close study of this one volume can keep a sincere student of Indian culture engaged in research and in-search for a lifetime if he or she were to truly imbibe all that is there. 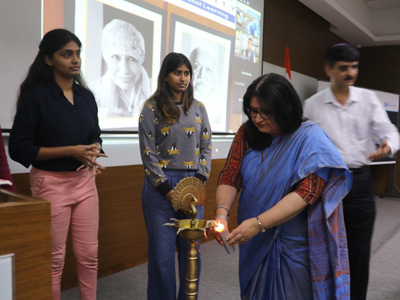 Dr. Mehra said that as we go through page by page, paragraph by paragraph of Sri Aurobindo’s vast writings on Indian culture, it fills our entire being with the purity of the truth about our cultural roots, about our glorious heritage and most importantly infuses in us a renewed optimism and hope for an even glorious future. At the same time, we begin to see very clearly that culture in its highest, deepest and truest sense is not something external but an internal process of gradually arriving at a greater harmony in life, a greater meaning and purpose in life, a wider and more comprehensive self-knowledge and world-knowledge.

This is what Sri Aurobindo, in whom the Brightest and Best of the West and the Grandest and Highest of the East were perfectly integrated – does when he expounds on Indian culture, Dr. Mehra added.

Sri Aurobindo’s writings on India are not merely in the form of an aggressive defense of Indian culture. His writings on Veda, Upanishads, his translations from the two itihāsas, Bhratrahari, Kalidasa, Andal, Bidyapati, Bankim Chandra and several others -- these suggest that same vastness of vision with which is characteristic of a mahayogi. His writings on Veda and Upanishad in particular come from his deep inner experience and spiritual realisations.

Sri Aurobindo’s keen perception of the Indian nature and temperament didn’t come merely because of what he read in the classical texts of India. But it was primarily because he had experienced and realised the spiritual truths of India. Dr. Mehra reminded the audience that by the time he came to the forefront of the revolutionary movement, Sri Aurobindo had already had several transformative spiritual experiences and realisations. 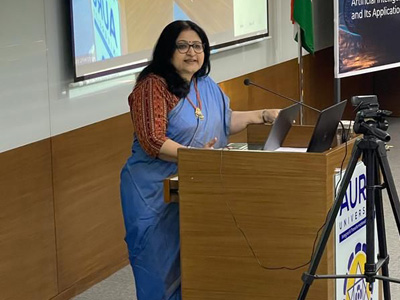 It began right from the time of his landing at Apollo Bunder in 1893. Then came his experience at the Shankaracharya Hill in Kashmir and his vision of the Goddess at an old Kali temple in Chandod — just to name a few. So all this had really made him ‘see’ and ‘experience’ some of the truths of Sanatana Dharma. With all these experiences we know that when he writes about the essential truths or foundations of Indian culture, he is not another intellectual trying to explain India using some intellectual frameworks. He speaks of the truths that he has experienced personally.

Dr. Mehra expanded on this point using an example – something fundamental to sadhana and to the teachings of Integral Yoga. That is about doing all our works as sacrifice, as yajña, as offering to the Divine.  Because then alone there is no bondage of the works, the inner being remains free of any attachments or consequences of the works. Dr. Mehra reminded of the second verse of Isha Upanishad in this regard, and quoted from the beautiful explanation given by Sri Aurobindo of this verse. She explained how Sri Aurobindo’s explanation tells us clearly how he himself approached all his revolutionary work, all his work in Baroda, Bengal, and Pondicherry. This is how he lived Sanatana Dharma.

She made a few more points to illustrate how Sri Aurobindo’s political work is directly linked with the work he did for the rejuvenation of Indian culture. Dr. Mehra also expanded with some examples to demonstrate how a close analysis of just the definition of culture given by Sri Aurobindo opens up a deep understanding of the multidimensional and integral truths of our culture.

Another important point highlighted in Dr. Mehra’s talk was about the life-affirming nature of Indian spirituality which is the foundation of all Indian culture. The Veda, Sri Aurobindo tells us, is the bed-rock of Indian civilisation. The Vedic rishis who were in quest of Truth and Immortality were not world-shunning ascetics. This is important to recognise because one of the biggest misunderstandings or misrepresentations about Indian spirituality is that it is world-shunning or life-negating.

Dr. Mehra’s talk received a warm welcome from the audience. Many members in the audience came up to congratulate her after the talk. A few questions were asked by the audience members joining online about the place of women in Indian culture as explained by Sri Aurobindo as well as the importance of ethical concerns raised in the Upanishads.  Dr. Mehra briefly addressed these questions with some appropriate examples.