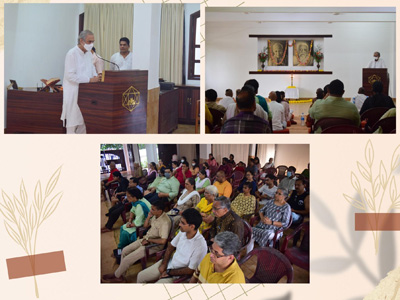 We call on Thee, the lord of hosts, the poet of poets, the most famous of all; the supreme king of spiritual knowledge, O Lord of spiritual wisdom, listen to us with thy grace and reside in the place (of sacrifice).

To mark the 150th Birth anniversary of Sri Aurobindo and the 75th year of India’s Independence,  AuroBharati celebrated Sanskrit Day. The celebrations began with a unique programme, ‘Devavani: Language of the Gods’ at Sri Aurobindo Society, Pondicherry, on 12th August 2022. 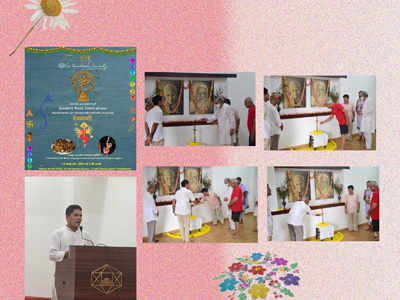 The programme started with the lighting of the lamp and invocation to the supreme. Kishor Kumar Tripathy, Member Secretary, AuroBharati, welcomed the dignitaries and audience of the programme and spoke about the importance of celebrating Sanskrit Day. As per the Hindu calendar, Sanskrit Diwas or World Sanskrit Day is celebrated on every full moon day of the Shravana month to spread awareness and respect for the most ancient language, Sanskrit; also to promote the revitalisation of the language. It is believed that on Poornima or full moon day or any time during this month, the Shrava Nakshatra rules the skies and the month Shravana derives its name from the Shravana Nakshatra. He informed about the various activities undertaken by AuroBharati in the light of Sri Aurobindo and the Mother in the areas of Sanskrit and Indian Culture and the efforts to work for the propagation of Sanskrit as a language of consciousness and the ancient scriptures as a treasure-house of the riches in Indian culture. 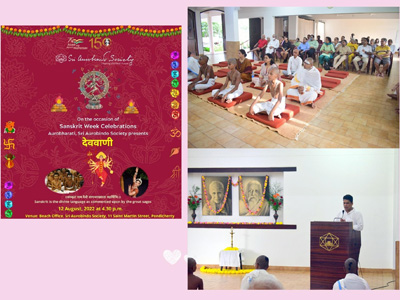 Shri Pradeep Narang, Chairman, Sri Aurobindo Society, Pondicherry, graced the occasion and said that this is the day when we celebrate the aspiration of the Mother and her order to us what the Sanskrit language should be, what it is in its essence and how it should be manifested as a national language of India. He informed that the Mother called Sanskrit the language of the Gods. If we genuinely want to talk to each other, then we should learn Sanskrit. Suppose we really want to understand the soul of India. In that case, it can only be understood clearly and more comprehensively through the Sanskrit language. From the beginning of the Sri Aurobindo Society, she has been given the task of doing meaningful work in the Sanskrit language and correctly interpreting the scriptures in the light of Sri Aurobindo. Highlighting the glory of Sanskrit, he said that Sanskrit is the language which opens many doors. He empathised with specific works of AuroBharati in the areas of correct interpretation of the ancient scriptures to enrich the ancient wisdom for a sustainable future for humanity. 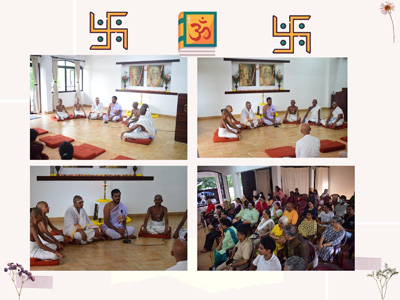 On this auspicious occasion, three programs were organised to focus on the recitation of Sri Durga stotra, chanting the Veda mantras and an Odishi dance. Kishor Kumar Tripathy recited the Sanskrit version of Sri Aurobindo’s Hymn to Durga, initially written in Bengali (1909) and Sanskrit translation by Jagannath Vedalankar. Sri Durga stotra is the invocation to Mother Durga to make herself manifest in India and bestow courage, strength and knowledge to fight the powers of darkness that keep in her bondage ‘Mother Durga ! Rider on the lion, giver of all strength, Mother, beloved of Shiva! We born from thy parts of Power, we the youth of India, are seated here in thy temple. Listen, O Mother, descend upon earth, make thyself manifest in this land of India.’ 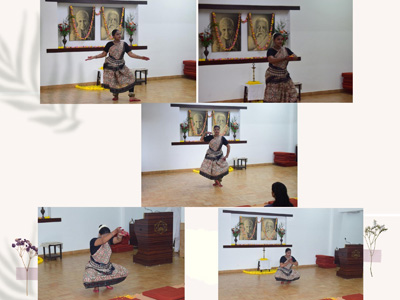 The Acharya and students of Vedashrama Gurukulam, Pondicherry, performed Vedaparayana-recitation of Medha Sukta, Devi Sukta, Shraddha Sukta and other prominent Suktas from the Vedas. Shraddha Suktam is the collection of Mantras where Goddess Shraddha is considered paramount in the world. ‘Shraddha makes the fire burn splendidly. The oblations offered with Shraddha. Shraddha is the best among all kinds of wealth. We assert this fact with our words of praise.’ It is believed that the recitation of Shraddha Suktam everyday morning before starting any activity makes everything auspicious. The Medha suktam is a very pious and powerful Suktam, and by reciting this daily with faith, devotion and concentration, one can acquire wisdom, eternal light and creative energy. Chanting the sacred mantras with proper pronunciation, use of psychic gestures, and rhythmic vibrations presented the oral tradition of the Vedas, which were written by the holy sages.

In the words of Sri Aurobindo:

There is the Book of Being’s index page;

The text and glossary of the Vedic truth Are there;

the rhythms and metres of the stars

Significant of the movements of our fate:

The symbol powers of number and of form,

And the secret code of the history of the world

And Nature’s correspondence with the soul

Are written in the mystic heart of Life.

Pooja Rani Sahoo (who graduated from SAICE and currently pursuing her Master’s degree in Odishi from Sri Sri University) presented two performances in Odishi dance, i.e. Mangala charanam and Saberi Pallavi. The Mangala charana performance marks the Odishi dancer’s entry on the stage, as she invokes the blessings of Lord Jagannath for an auspicious beginning. This was followed by a salutation to mother earth, to the teacher, to the accompanist and to the audience. The dancer then prays to Lord Ganesha, remover of all obstacles, for his blessing. This was followed by the Mangala charanam song by Sujata Mohapatra and choreography by Guru Kelu Charan Mohapatra. The next performance was Saberi Pallavi which means elaboration. Here, it is applicable not only to the dance but also to the music, which accompanies it. The movements are very graceful and lyrical it is distinct in it exceedingly intricate and interwoven rhythmic patterns of singular beauty, laying emphasis on pure dance. This pallavi is set to the Raag Saberi, dance choreography Guru Shri Kelucharan Mohapatra and music composed by Pandit Bhubaneswar Mishra.

The expressive and interpretive dance, a pure demonstration of emotion and rhythmic patterns, created a divine atmosphere during this occasion.

The programme concluded with a prayer to the Divine.