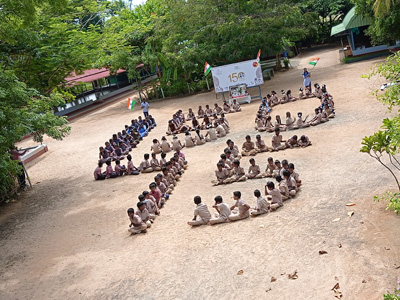 As we mark the 150th anniversary of Sri Aurobindo’s birth, we feel our devoted work would be the best tribute. Sri Aurobindo was a simple person who was not interested in worldly pleasures.

Keeping this in mind, to commemorate the 150th year of his birth anniversary and the 75th year of India’s Independence day, SARVAM, Sri Aurobindo Society, conducted a series of the programme for the children, students, youth, women and vulnerable in the villages from 1st to 15th August 2022. 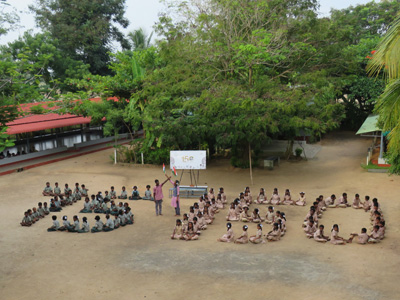 During the programmes, the organizers understood that:

The coordinators used this opportunity to participate more actively in the community work and inspire the community simultaneously. 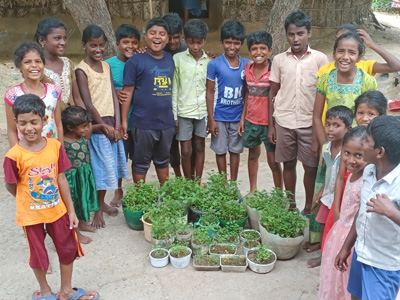 Around 150 children, 150 students, 150 youth, 300 women, 150 vulnerable individuals and 25 coordinators & volunteers made this programme a grand success. Nearly 150 kitchen gardens were initiated in the community. The health camp was conducted, and nearly 150 community people benefitted. On all the 15 days, all the participants recited the Hymn to Durga written by Sri Aurobindo, which invokes Mother Durga to manifest herself in India.

These celebrations brought in a sense of unity in all, and the organizers are sure that this sense of oneness will last longer with these people. Following activities were conducted for the participants Around five different programmes were conducted. The introduction program was given to 150 children aged 4 to 7 through songs, stories, and play activities focused on the nation, Independence Day, and national leaders, specially Sri Aurobindo. There was a positive effect on the children from playing activities. In the end, the children's key results were their discipline during flag holding and their knowledge of the national leaders. 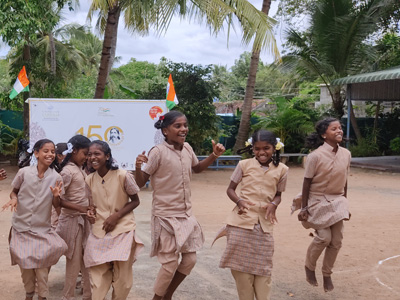 Around seven different programmes were conducted. Around 150 students were given an orientation program on Sri Aurobindo and Nation, an introduction to a few national leaders, and Independence Day's importance. Competitions on National Leaders and National important things like speech, Essay writing, Quiz, listening to the quotes, recitation of Hymn to Durga, Drawing etc. Adding sports and yoga to the program has created a very enthusiastic response from students. Knowing our nation's leaders made them proud of our nation and think of their role in the country. 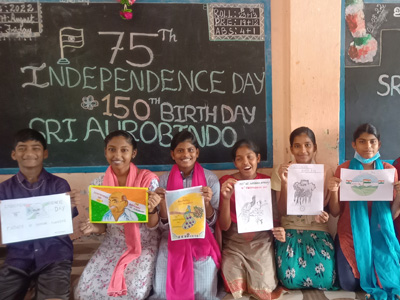 Around eight different programmes were conducted. In celebration of Independence Day and Shri Aurobindo's Birthday, 150 young people were given orientation programs on National leaders and their sacrifice. Competitions in drama, speech, quiz and essay writing were also conducted. Yoga and March past inspired the youth to participate energetically, while "Recitation of Hymn to Durga" by Sri Aurobindo inspired them to see our nation's future. While engaging in these activities, the youngsters felt more inclined towards spirituality and nationalism.

A key role in every community activity is played by volunteers and coordinators. As well as receiving enlightenment, they also had the opportunity to participate in programs specially designed for them like an Orientation Program on Sri Aurobindo and the Independence day, Recitation of Sri Aurobindo's writings in Tamil, Recitation of The Mothers' writings in Tamil, Training on progressive social change with communities, and individuals. During the recitation of Hymn to Durga by Sri Aurobindo, they were moved to think deeply about the nation and community. Their active participation and involvement in community work will be the greatest gift this program can give them. They have realised that being a good human being requires both patriotism and spirituality. 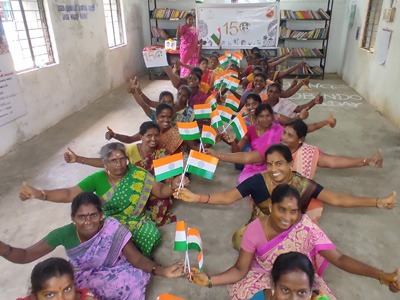 The six types of programs were conducted. Around 300 Women were offered various programs like Orientation on Independence Day and Sri Aurobindo's Birthday, an introduction to leadership with examples from National Leaders, a mental and physical health awareness program, an entrepreneurial motivation program for women, Training in handwork skills - Hands on Training, Financial Literacy program, an awareness program on the importance of breastfeeding and Skill games for women to make them enjoy themselves. They also felt the inner silence and thought of our country deeply through the recitation of the Hymn to Durga written by Sri Aurobindo. Throughout their readings, everyone understood the power of patriotism and how spirituality can make anything possible.

150 People from the vulnerable and aged groups were, as usual, given priority by Sarvam. Programs like Mental and physical health awareness programs, Reading of Hymn to Durga & Mother's and Sri Aurobindo's quotes, and motivational programme for older adults. Health camps also helped the people to make use of it. In addition, relief materials like blankets and rice were provided. Having love and care from volunteers and coordinators is one of the most important factors that led the aged people to go out confidently.

One hundred fifty kitchen gardens were initiated in the villages. Community people were offered various programs like Activity-based - Good Practices for Anganwadi Children, establishing healthy kitchen gardens and providing some saplings, Training on nutrition using local ingredients, Mental and physical health awareness program, importance of controlling sugar & bp - An Awareness Program. One health camp for Blood Sugar, Blood Pressure and Health check-up was also held. The recitation of Sri Aurobindo's Hymn to Durga made them feel healthier and reminded them of our national leaders.

There were many positive responses from the villages during the celebrations of the 75th Independence Day and the 150th birthday of Sri Aurobindo. There was an offering of prayer made to Sri Aurobindo and The Mother after all the programs. It was evident in all the programs that the people carried patriotism and spirituality.

To promote patriotism and spirituality within the community through programs in Sri Aurobindo's name is Sarvam's privilege. It gave us time to think about and measure our growth, where we need to be, and the best path to get there.

Sri Aurobindo belongs to the future; he is the messenger of the future. He still shows us the way to follow in order to hasten the realisation of a glorious future fashioned by the Divine Will. – The Mother