NEWS FROM CENTRES AND BRANCHES 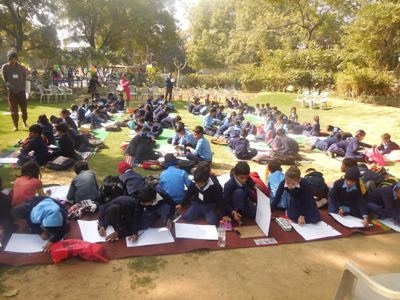 The main topics addressed by Mr. Naik were Discovering Aim of Life, Strengthening Body and Mind, Enhancing Concentration, etc. These sessions were very engaging and interactive. Dr. Anita Bhela shared ‘Insights on Self-exploration’. She advised the youngsters to first self-reflect on their strengths and weaknesses, emphasizing on the fact that everyone has the potential to progress and overcome their weaknesses. Most of the participants talked about stage fright and public speaking. She suggested ways to improve on language and communication skills to the youth. A total 25 people participated in the workshop.

To commemorate the occasion of 139th Birth Anniversary of the Mother, SAS Delhi Branch organized a drawing competition for Municipal Corporation of Delhi (MCD) schoolchildren on February 18, 2017.

A total of 349 children participated from 16 South Delhi schools. The children were asked to draw on the topic ‘cleanliness and hygiene’. Ms. Vinima Gulti, Mr. Ravi Dutta and Mr. Kapil Sejwal, renowned artists from Delhi, were the judges on the occasion. The judges had memorable interactions with the young budding artists. The participant students from classes 1 to 5 were divided into three groups. Three winners in each group were awarded the prize. Lots of group games and fun activities were also played with the children to make an memorable outing for them. Refreshments were provided too to all the students and the accompanying teachers from various schools. The children had a marvellous time in the Society campus lawns. The eagerness and enthusiasm of the participants was remarkable.

On February 19, 2017, a workshop was organized for senior citizens called ‘Live, Love and Laugh’. Mr. Pulkit Sharma, a well-known clinical psychologist practicing in Delhi, gave a talk, titling his session ‘Four Secrets to Staying Happy’. In his talk, he emphasized on faith, surrender and work to restore the higher self. He quoted few lines from epic Savitri and the Mother’s works.

Thereafter Dr. Santosh Sahi took a ‘Laughter Yoga’ session. Everyone present participated with full zeal. It was a treat to watch all happy and smiling faces in the campus. Later, lots of fun and group games (lemon & spoon, musical chair, protect your heart) were also organized.

Mr. Saurabh Bhardwaj, MLA—Greater Kailash, presided over the function and gave away prizes to the winners. He applauded Society’s efforts for the welfare and recreation work for the elderly. Thirty five people participated in the event.

On the birth anniversary of the Mother on February 21, 2017, the Society staff, the Navakriti School Principal and teachers along with a few members had a guided meditation session followed by bhajans (prayer songs) by Mrs. Kuckoo Mathur.

The devotees offered flowers. Prasad and darshan card were personally given by the sadhaks to all the visitors and participants. Series of Programmes on Personality Development at Gwalior Branch

Dr S. C. Sharma was invited to give a lecture on ‘Personality Development’ at Ramakrishna Vidyamandir of Ramakrishna Mission, Gwalior, for the students of senior classes of this premier school. Dr Sharma explained the need of personality development through a PowerPoint presentation. The two-day programme was held on February 7 and 8, 2017.

On February 19, 2017, Dr. S. C. Sharma was invited by Retired Officer’s Club at Mayur Nagar, Gwalior, for a Lecture on Personality Development. The programme was held at Mayur Nagar Spiritual Community Hall. Sri Mahesh Parashar, a well-known businessman of Gwalior, presided over the function. Dr. Sharma explained the need of personality development in the light of Sri Aurobindo teachings.

Encouraged by the response of the senior students, on February 19, 2017, Dr S. C. Sharma was again invited by Ramakrishna Vidyamandir of Ramakrishna Mission, Gwalior, to deliver a talk on ‘Personality Development’ for Teachers. Dr Sharma through another PowerPoint presentation, especially prepared for teachers, explained how to develop the personality of the students by inculcating values in them and to carry out service of the Divine through education.

On February 25, 2017, Dr S. C. Sharma was invited by the Optimus College, Gwalior. Mrs. Nandita Trivedi, Principal of Jiwaji University, presided over the function. Dr. Sharma again delivered a motivational talk for the teachers of the college on personality development and emphasized on the importance of learning till the end of the life, following the deep message ‘Live to Learn’.