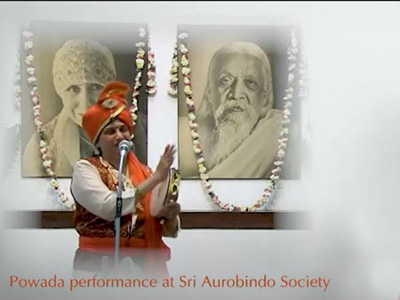 In our Insightful Conversations series we speak with authors, artists, performers, educators, story-tellers and other creative individuals who are keeping alive, reviving and also giving new forms and expressions to the timeless spirit of Indian culture, history and civilisation.

For this special edition in Hindi, we spoke with an accomplished and highly acclaimed Powada performer — Mahila Shahir Vinata Joshi. She shared with us a brief history and background of Powada. This performance art from Maharashtra, popular since the times of Chhatrapati Shivaji, combines story-telling, poetry, music and theatre arts. 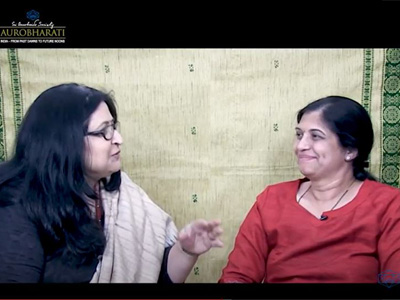 It has been traditionally used to disseminate the stories of warriors and courageous men and women. It inspires the audience to cultivate qualities of courage and truth. Powada performers are traditionally called as Shahir.

In addition to various professional engagements, Vinata Joshi has also taken the art of Powada to many colleges and schools. She has performed stories of Shivaji Maharaj, Tanaji Malusare, Rani Lakshmibai of Jhansi, Veer Savarkar and several other inspiring personalities. She shares with us about the responses she has received from the youth. This part of the conversation exemplified the educative role of art, also emphasised by Sri Aurobindo.

Between them music, art and poetry are a perfect education for the soul; they make and keep its movements purified, self-controlled, deep and harmonious. These, therefore, are agents which cannot profitably be neglected by humanity on its onward march or degraded to the mere satisfaction of sensuous pleasure which will disintegrate rather than build the character. They are, when properly used, great educating, edifying and civilising forces.

As a special treat, we also get a sneak-peak from a powada based on Rani Lakshmibai.

Vinata Joshi recently wrote and composed a Powada-abhivachan inspired by the life-sketch of Sri Aurobindo. This highlights the pre-Pondicherry phase of Sri Aurobindo’s life, with special focus on his revolutionary work and his spiritual realisation at Alipore prison. It also briefly features Sri Aurobindo’s Yogic journey in Pondicherry.

As an offering to Sri Aurobindo and the Mother, in March 2022 Vinata Joshi performed this Powada for the first time at Pondicherry. The performance was organised at Sri Aurobindo Society campus. During our conversation, recorded a day after this performance, she also speaks about the inspiration behind this special composition. 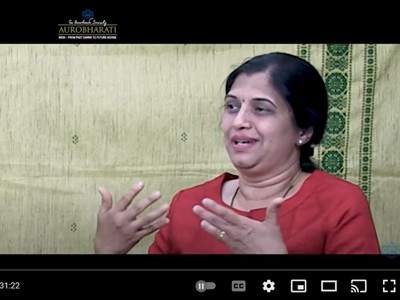 Mahila Shahir Vinata Joshi has been performing Powada for almost 40 years and has won great acclaim. She has given more than 1500 performances in various parts of India and the world.

She hails from a great family lineage of patriots and freedom fighters – that of Swatantryaveer Savarkar ji. Thus she naturally carries in her DNA an intense love for the motherland, a strong desire, will and special enthusiasm and spirit for doing something for the rise of our beloved Mother India. And she has been doing exactly that through her powerful Powada performances taking the stories of revolutionary freedom fighters and courageous men and women from the pages of Indian history to audiences all over the country.