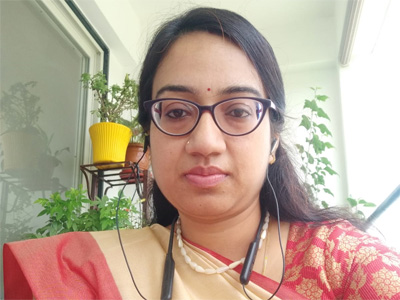 As part of our ongoing celebrations of Sri Aurobindo’s 150th Birth Anniversary, we have been organising a series of Special Lectures organised under the Theme: ‘India – Our Mother.’

For the ninth lecture in the series, Dr. Shraddha Gour Mohanti was invited to share some thoughts on a very interesting topic – “Love and Heroism in Sri Aurobindo’s Narrative Poems: Ulopie and Chitrangada.” 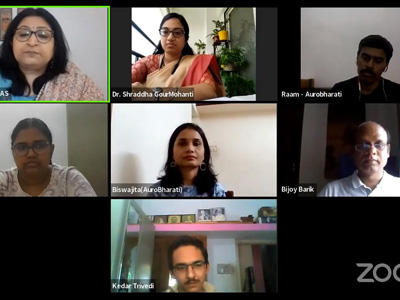 After a moment of silence invoking the Mother’s presence, the event opened with brief welcome and introductory remarks by Dr. Beloo Mehra of AuroBharati. She informed that this was the second lecture AuroBharati has organised about the women of Mahabharata – the first one was by Dr. Geetesh Nirban on Shakuntala. And it was also the second lecture on appreciating Sri Aurobindo’s poetry with a specific theme in mind. A few months back, a talk under the same ‘India-Our Mother’ series was delivered by Dr. Charan Singh Kedarkhandi on the topic of veera rasa in Savitri. And the topic for lecture 9 also celebrates the spirit of courage and heroism.

Dr. Mehra reminded the participants of Sri Aurobindo’s deep self-immersion in the study of the Mahabharata and the Ramayana during his Baroda period and his translations of selections from these itihāsas. She also pointed out that starting with July 2022 issue of Renaissance a series of articles is being featured, which explores Sri Aurobindo’s interpretation and appreciation of the two itihāsas – Ramayana and Mahabharata. 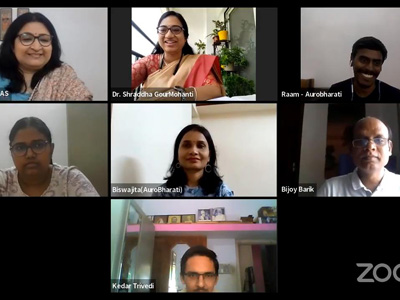 As the various stories and legends from these epics, particularly the Mahabharata have been retold and reinterpreted and rethought so many times by different poets and storytellers and scholars and interpreters, a lot of the real meaning, truth and beauty of these legends either get lost or is covered over by several layers. Sri Aurobindo had spoken of this in a letter to his brother, Dr. Mehra added quoting a passage from the specific letter. Sri Aurobindo tried to bring out the deeper truth and significance of some of these legends when he retold the stories of Nala, Ulopie and Chitrangada, Ruru and Pramadvura from the Mahabharata. And of course, the grandest work in that regard is his mantric poem Savitri. Thus, in this light also his poems on Ulopie and Chitrangada become interesting for a deeper look.

Raamkumar from AuroBharati gave a brief introduction of the speaker. 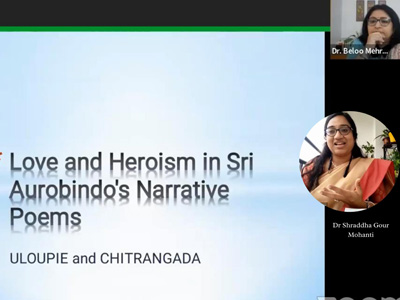 Dr. Shraddha in her presentation said that she has been drawn to Sri Aurobindo’s poetry since her childhood. She added that though not much has been written about these two poems of Sri Aurobindo, Ulopie and Chitrangada, she has found them expressive of the deeper themes of love, heroism and adventure of consciousness that are a hallmark of many of Sri Aurobindo’s poems.

Giving a brief background of Sri Aurobindo’s poetic work, the speaker pointed out that through his various poems based on the characters of Mahabharata, Sri Aurobindo always brought out the higher ideals of life and spirit through the stories of these characters.

Dr. Shraddha Gour Mohanti briefly narrated the stories of Ulopie and Chitrangada from the Mahabharata. This was helpful in setting the right context to better appreciate the two poems. She then brought the audience’s attention to these two poems of Sri Aurobindo, giving a brief history of their composition and revisions. She also spoke about her understanding of what Sri Aurobindo has tried to portray about these two women characters – particularly about their love for Arjun, and how they lived a life of courage and high ideals. 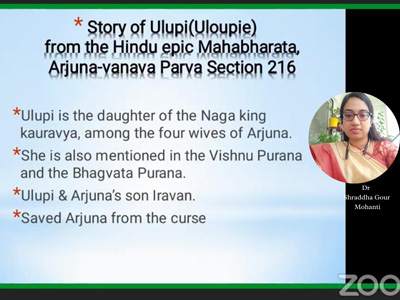 Dr. Shraddha pointed out some of the similarities she has found in the characterization of these two women and that of Savitri in Sri Aurobindo’s epic poem. She also spoke of a few other parallels particularly in regard to the courage and heroism of all these women. She focused on specific lines from each of the poems to highlight how Sri Aurobindo speaks of the true nature of love which is complete self-giving and encouraging the beloved to rise in consciousness to fulfill his or her life’s mission and work. She pointed out that Sri Aurobindo makes it clear that only a woman can love in this way.

Through the speaker’s focused presentation, the audience were able to appreciate Sri Aurobindo’s fondness for epic heroines who did not merely weep laying everything on fate, but were practical and adventurous. Dr. Shraddha Gour Mohanti was able to show that through his poetic writings about such courageous and loving women Sri Aurobindo showed how they have been instrumental in helping humanity to move forward.

During the interaction with the participants, Dr. Shraddha Gour Mohanti pointed out the need for using such inspiring poetry about strong characters from our literary heritage in the classrooms to encourage students to rise to higher ideals and qualities. She said that this is always more effective and meaningful than any moralistic preaching and lecturing to the students.

Dr. Shraddha Gour Mohanti completed her graduation in Computer Science, and then went on to do post-graduation, M.Phil and doctorate in English literature. The topic of her M.Phil research was the study of Transcendentalism in the poetry of Sri Aurobindo.

She is presently working as Principal at a reputed CBSE school in Indore. She has more than a decade's experience of teaching English to the students of classes X to XII.

Growing up in a family of devotees and followers of Sri Aurobindo and the Mother, Dr. Shraddha has always been drawn to Their writings. Her specific areas of interest include Sri Aurobindo’s poetry, Integral philosophy, yoga and education. Some of her writings have been published in various journals and magazines like New Race, Renaissance etc.

She also conducts seminars for students on different teenage related issues. She enjoys guiding teachers and mentors on application of higher ideals of futuristic education.