The Unity of the Bhāratiya Civilisation: Evidence And Issues 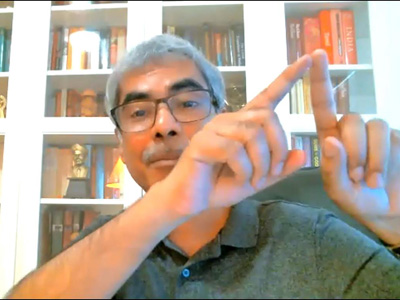 A recording of the session can be accessed here.

For the recording of Question & Answer session, click here.

In May 2022 the Renaissance team had organised a 10-day exhibition titled Bhārata Shakti at the Ashram Exhibition House in Pondicherry. The Exhibition was a grand success, and we received several requests to take the exhibition outside Pondicherry. 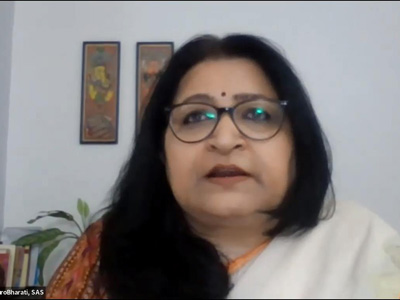 The series ‘Reawakening Bhārata Shakti – Toward an Indian Renaissance‘ aspires to deepen the work that was started in the exhibition through a variety of series of talks and events inspired by the themes which were briefly touched upon on in the exhibition.

The first event was held on Saturday, July 9, 2022. The Renaissance team invited Dr. Raj Vedam from Texas, USA to deliver a talk titled ‘The Unity of Bhāratiya Civilisation: Evidence and Issues’.

Dr. Beloo Mehra, Senior Academic Mentor at AuroBharati and Editor of Renaissance gave a brief introduction of the event series. She then introduced the guest speaker Dr. Raj Vedam and invited him for the talk.

For the next one hour and fifteen minutes, Dr. Vedam patiently and diligently walked the audience through rich data representing a wide range of cultural and knowledge domains — music, architecture, astronomical knowledge traditions, evolution of script, languages, knowledge of medicine, mathematics, genetics and more — to illustrate how an underlying unity has been the key aspect of Indian civilisation. The evidence he presented proved well the hypothesis he started his talk with, namely, all evidence one finds from within the land-mass called Bharat, points to a deep cultural unity which has led the historical march of the Bhāratiya civilisation. 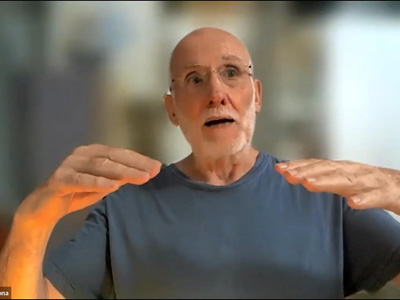 The extremely well illustrated talk by Dr. Vedam highlighted several key findings from various scholarly studies and presented valuable and rich data points for any interested researcher to take this work further. Towards the end of his talk, he pointed out some of the ‘etic’ frameworks that have been used to write Indian history which has resulted in deracinated generations of Indians. He emphasised the need to rewrite Indian history based on internal evidence and a framework that is grounded in indigenous ways of understanding identity and culture.

The audience found the whole talk highly engaging and enriching. A few audience members asked some highly relevant questions, which Dr. Vedam addressed patiently. To a question about what can be done to rewrite Indian history textbooks, Dr. Vedam replied that while the political dispensation in power must play an important role in this, it is also important that on ground level each Indian also makes an effort to learn about, as much as possible, the evidence-based history of our civilisation. Much misinformation and misinterpretation has badly distorted our sense of who we are as a people, this needs to be addressed through an intense decolonising of mind and getting rid of our customary mental prejudices about our past fed by the colonisers’ version of history. 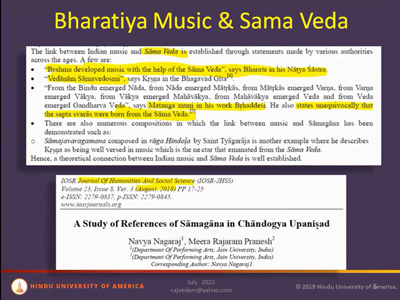 The online event on Zoom was attended by 30 people, and several more joined the live stream through Sri Aurobindo Society’s Facebook page where it has already reached to more than 500 people in the last 2 days.

Here is some feedback received from the audience: 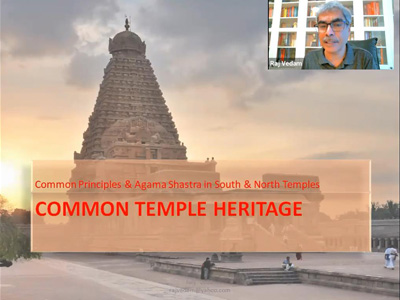 Dr. Raj Vedam is Visiting Faculty at Hindu University of America, USA, and also at Arsha Seva Kendram, Coimbatore. He is the co-Founder of Indian History Awareness & Research and also serves on the India Advisory Council, Dharma Civilization Foundation.

Dr. Raj Vedam earned his doctoral degree in Electrical Engineering from Oregon State University, Corvallis, USA. He has many years of multi-disciplinary work experience in diverse industries, and with several journal and conference papers and patents, he is an innovation leader.

Dr. Vedam believes that an evidence-based narrative of Indian history is urgently needed to correct the grievously distorted identity and history of the Indian civilization. With this aim, he has delivered over 150 talks in various cities in India and USA. He has been invited to share his research findings at some of the highly prestigious and popular platforms.

He has also conducted over a dozen teacher-training workshops. At Hindu University of America, Dr. Vedam offers two courses on Reconstructing Hindu History.  He has also worked on reviewing and correcting school history textbooks in two states in India and in Texas.