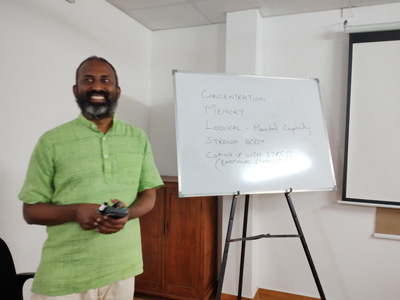 SAFIER organised a 2-Day Exposure Camp of Integral Education to a group of seven representatives from Dr. M.S. Udayamurthy School of Excellence, Namakkal, at the premises of Sri Aurobindo Society and the Ashram, on 2nd and 3rd July. 2022. Shivakumar and Priti of SAFIER introduced the very basics of Integral education, after the group had a thorough look at the current educational system. The group visited the pre-primary, primary and secondary section of SAICE and the playground and sportsground too as an additional exposure to the implementation of Integral Education. 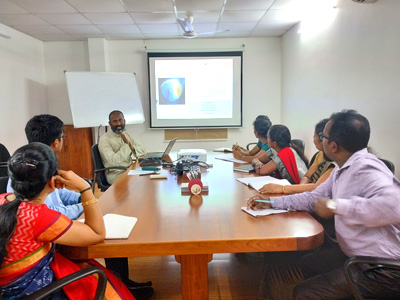 Day 1 started with Mrs Arthy Lakshmi, the Correspondent of the school, introducing her team to the SAFIER team of Shivakumar and Priti and vice-versa. Then she and her son Krithik gave a brief PowerPoint presentation unveiling the diverse activities of the M. S. Udayamurthy School of Excellence which was the first CBSE School in the Namakkal region of Tamil Nadu established in the year 2000. Later, the group of seven people visited the Kindergarten and main school of SAICE where they got a short introduction of the implementation of integral education at the pre-primary, primary and secondary levels in the Ashram school from Amala and Gaytri didi. In the afternoon, Shivakumar gave a brief introduction to Sri Aurobindo Society (SAS) & its educational work. This was followed by an open discussion with the participants by Shivkumar and Priti as a lot of curiosity had developed in the participants minds as regards Integral Education and its implementation.  The day ended with a brief overview by Priti with reference to the need of Integral Education and its true definition: ‘A Soul Guided Education’. Shivakumar Introduced the resource materials such as the book ‘On Education’ and ‘How to grow up a child’ as a must read to kick start the journey of IE. 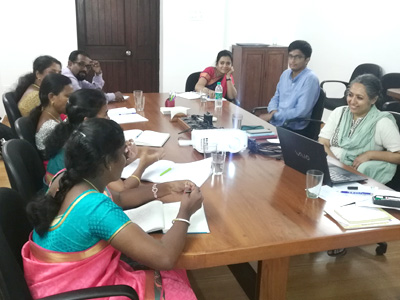 Day 2 started with a visit to the Playground in the morning and the Sports ground in the evening, where Rajkumar-da introduced the team to the approach to Physical Education in the ashram and the school and its importance. This was followed by a deeper discussion by Shivakumar where he initiated a re-look at the prevalent education system and its fallout. The interaction led to a point where what truly has to be developed in the children was initiated; and that is the faculties like concentration, emotional stability etc, which would help the children become independent learners and good students. This would be well taken in by the parent community too.

The workshop wrapped up with a discussion on how to take the process of education at the MSU School forward. Mrs Arthy Lakshmi, the Correspondent of the school, was keen to make some adaptations in the school and go for intensive teacher training workshops to help the school make a step in the transition towards becoming integral education-based schools. She was also keen to start a free progress stream for which she would reflect on the subject a little more deeply. It was decided that a further plan and a course of action will be discussed in the future, as per the needs of the group. The group was extremely grateful for such a life-changing experience and exposure to Integral Education.

The 2-day exposure camp was facilitated by Shivakumar and Priti of SAFIER.