Rishi Sri Aurobindo and his vision on Resurgence of Asia 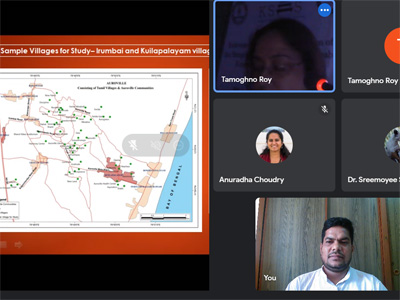 Dr Kishor Kumar Tripathy, Member Secretary, AuroBharati, chaired a session on “Rishi Sri Aurobindo and his vision on Resurgence of Asia” during the conference on “Relevance of the Universal Mission of the Bengal Renaissance for a Sustainable Future for India and the World” organised by Kolkata Society for Asian Studies, Maulana Abul Kalam Azad Institute for Asian Studies and Anthropological Survey of India, 11-12 June 2022. The conference’s objective was to highlight the 19th- and 20th-century Bengal Province in India as a nerve centre with various socio-cultural and religious reform movements. Bengal rethought and retold its traditions in the light of its immersive exposure to Indian and global thought, fervent & diverse intellectual inquiry, and a Nationalist movement with a Universalist quest for intercultural understanding. In this session, Dr Nalini Gangopadhyay, Former Assistant Professor of Geography, Azadhind Fouz Smriti Mahavidyalaya, Prof Premagshu Chakrabarty, Head Department of Geography, VishvaBharati, Shantiniketan, West Bengal and Dr Anuradha Choudray, Assistant Professor, Department of Humanities and Social Sciences, IIT, Kharagpur presented their research papers. 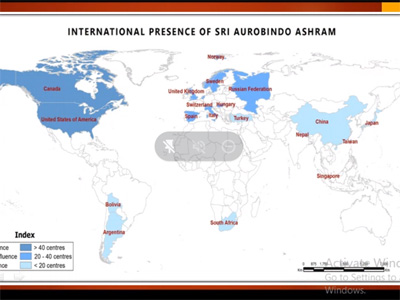 Dr Nalini Gangopadhyay/Prof Premagshu Chakrabarty presented a paper on Sri Aurobindo- His Integral Yoga and its national and international importance. The speaker highlighted the essential aspects of Integral Yoga and humanity’s sustainable future, including a radical change in human life based on transforming human consciousness. In this paper, the author spoke about the role of Sri Aurobindo Ashram, Sri Aurobindo Society and Auroville in creating a human unity based on peace and sustainable development. Dr Anuradha Choudray spoke on Rishi Sri Aurobindo and his vision for the Resurgence of Asia. She presented her idea on the Sanatana Dharma and the influence of India on the collective consciousness. She examined some of the fundamental issues of central importance for the unity of Asia and the development of regional identity. She emphasised the fundamental unity of humanity and how India’s wisdom and soft power can be a tool for the development of Asia.

In his remarks, Kishor Kumar Tripathy highlighted the relevance of Sri Aurobindo in the areas of Resurgence of Asia and the influence of Integral Yoga and its importance. Sri Aurobindo had a great dream for Asia where he mentioned the resurgence and liberation of Asia. “Another dream was for the resurgence and liberation of the peoples of Asia and her return to her great role in the progress of human civilisation.” India has played a significant role in creating unity among the countries of Asia despite current conflicts and uncertainties. Historical perspectives, including the ‘spiritual gift of India’, can positively impact the development of national and regional identities. The Integral Yoga of Sri Aurobindo has always emphasised the divinity that would hasten the descent of the Divine into earthly life and transform it into a Divine Life. Sri Aurobindo developed new terminology to his experiences, which he called Integral Yoga “It is the psychic personality in us that flowers as the saint, the sage, the seer; when it reaches its full strength, it turns the being towards the Knowledge of Self and the Divine, towards the supreme Truth, the supreme Good, the supreme Beauty, Love and Bliss, the divine heights and largeness, and opens us to the touch of spiritual sympathy, universality, oneness.” The primary purpose of spiritual life is the release of the soul not only from the cycle of birth and death but also the embodied should seek unconditional release from falsehood and ego in all parts of its being and should rise into the higher worlds of spirit.