PREMA NIRJHARINI—A MUSICAL OFFERING AT THE FEET OF THE MOTHER 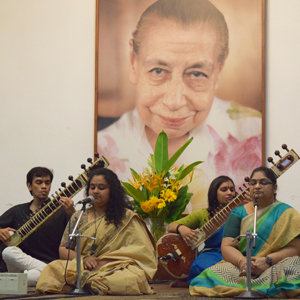 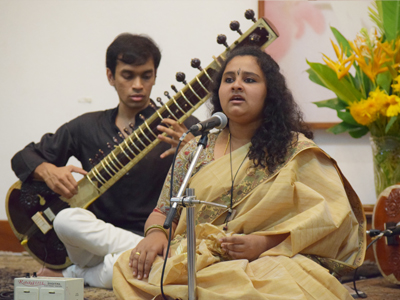 Eight of the performers belonged to TFA—a cultural service-oriented non-profit organization with centres in India, Malaysia, Singapore, Australia and Sri Lanka—which aspires to nurture and spread a love for the fine arts (especially Indian music and art) all over the world. The audience of the inspiring performances of Indian classical music at ‘Prema Nirjharini’ included members, devotees and visitors of Sri Aurobindo Ashram, students of SAICE, members of Sri Aurobindo Ashram and music connoisseurs of music in Puducherry.

The programme commenced with a transcendent offering to the Mother, ‘Guru Stotra’ and ‘Saraswati Vandana’, performed in Hindustani classical (vocal) by Ms. Arjita Bishnu Chowdhury, an ex-student of SAICE. This performance gave a very spiritual start to the programme and set the tone for the musical evening. The next performance was a vocal offering by Ms. Anusha Gayathri, one of the vocalists from TFA, who performed a piece in chota khayal in Raag Bhairagi Bhairav followed by a bhajan on Lord Shiva in the same raag. Both the pieces had a tremendous emotional and expressive appeal and were deeply appreciated by the audience.

The next presentation was a group sitar recital, performed by Mr. S. M. Anand, Ms. Vedasruthi, Ms. Swathi and Mr. Santosh, playing two compositions in the Raag Malkauns—one of the most beautiful, popular and ancient of the raagas in Hindustani Classical music. This was an experience cherished by all the members in the audience. 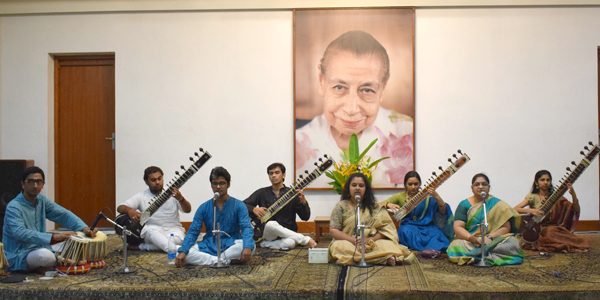 The next was an enthralling performance of two bhajans in on Lord Ram—‘Ram Se Koi Mila De’ and ‘Prema Udita Manse Kaho’—sung in Sufi style by Ms. Anusha Gayatri, Mr. Janaarthan and Ms. Asha, the vocalists of TFA. The word bhajan is derived from the Sanskrit word ‘bhaj’ that means ‘to render service’, and the bhajans performed that night truly and intensely exhibited a deep devotion of the performers toward the Divine.

The last act for the evening was a Mangalam set to Raag Bhairavi in the Sufi style. The event was a beautiful blend of vocal and instrumental music that touched chords of the heart, bringing joy to the soul, enlivening the being and rejuvenating the mind. The entire programme was dedicated to the Mother on her birthday and the Descent of Supramental Manifestation and it showed in each of the performance which was a humble offering at her feet.