Sri Aurobindo and Nationalism – Orientation Program for the students 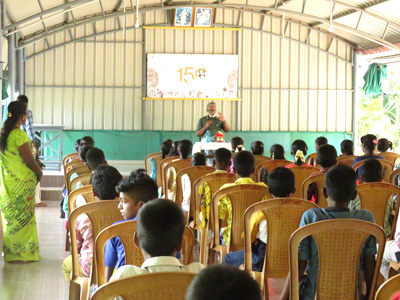 To commemorate the 150th year of Sri Aurobindo's Birth Anniversary and the 75th year of India’s Independence celebrations, SARVAM, Sri Aurobindo Society, conducted a programme for the students in the village on 24th May 2022. More than 60 students part of the Children Corner attended this programme.  Shri Shankaran, Ashram Volunteer for the past 20 years, was invited as the resource person for this programme. He is also the manager of study camps on Sri Aurobindo's yoga at the Delhi Ashram's Himalayan centre, Vanniwas.

The main objective of this programme was to enlighten the children on Sri Aurobindo's younger life and work for our nation. Shri Shankaran spoke on "Sri Aurobindo and Nationalism", which was very useful to all the children. The students learnt more about Sri Aurobindo's role in India's independence. 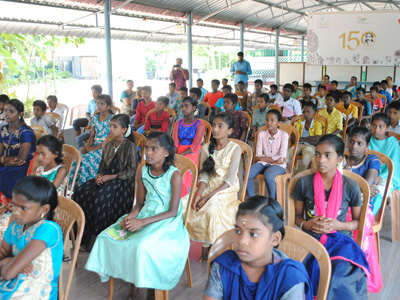 In the manner in which Sri Shankaran discussed the young life of Sri Aurobindo, he emphasized his sacrifice for the independence of our country. In addition, he discussed Sri Aurobindo's prison life, the changes that brought in Sri Aurobindo’s life and its effects on our nation.

He mentioned how brilliant Sri Aurobindo was and how much chance he had to lead a prosperous life. He refused all the opportunities of a rich life. He went through all the difficulties to achieve freedom for our nation.

Shri. Shankaran also spoke on how the other leaders like Balagangathara Thilak and Bharathiyar were associated with Sri Aurobindo. Many things about Sri Aurobindo's youth and his patriotism were revealed to students for the first time. It is through these types of programs that students can begin to think about our country and independence.