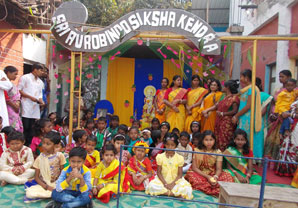 Sri Aurobindo Siksha Kendra is an initiative of Bishnupur Uchchal Probaho, an NGO working in collaboration with Sri Aurobindo Society, Puducherry, inspired and guided by the teachings of Sri Aurobindo and the Mother and based on Integral Education. The standard of education in primary- and in secondary-level schools in rural West Bengal, attended by students mostly from poor and lower middle-class families, is very low, leading to students’ poor performance in all subjects, especially in English and Science.

A huge need was therefore felt to establish a successful Model School to overcome this challenge, so that it may be replicated across the state and even the country. Sri Aurobindo Siksha Kendra was inaugurated on January 6, 2017, at Bishnupur in South 24 Parganas, West Bengal. On January 9, the school started with 20 students, studying in four classes—pre-kindergarten, kindergarten—level 1, kindergarten—level 2, and Class 1.

On January 14, 2017, Two Maruti Eeco vans donated by Bajaj Auto Ltd. started transporting students to school. The third vehicle, also donated by Bajaj Auto Ltd., started operating on February 17. In the months of January and February some important cultural and national events were observed at the school, such as the birth anniversary of Netaji Subhash Chandra Bose on January 23, Indian Republic Day celebrations on January 26, Saraswati Puja on February 1, School Sports Day on February 3 and celebrations of the Mother’s birthday on February 21.

The school is fully functional now and increasingly more parents are showing keenness to admit their children from the new session onwards.