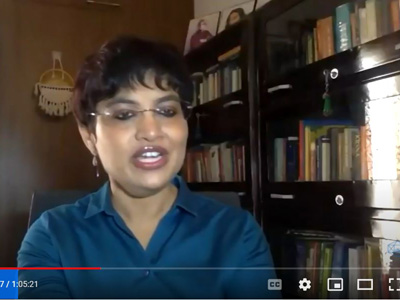 As part of our ongoing celebrations of Sri Aurobindo’s 150th Birth Anniversary (August 15, 2021 to August 15, 2022), we have been organising a series of Special Lectures organised under the Theme: ‘India – Our Mother.’

For the seventh lecture in the series, Dr. Geetesh Nirban was invited to share some thoughts on a very interesting and insightful topic - ‘Virtues as Empowerment: Understanding Shakuntala in Mahābhārata.’

After a moment of silence invoking the Mother’s presence, the event opened with brief introductory remarks by Dr. Beloo Mehra of AuroBharati. In her comments, Dr. Mehra invoked the words of Sri Aurobindo that the Mahabharata is the creation and expression not of a single individual mind, “but of the mind of a nation; it is the poem of itself written by a whole people.” (CWSA, Vol. 20, p. 347). According to him, the Mahabharata is not only the story of the Bharatas, but on a vast scale it is actually the epic of the soul and religious and ethical mind and captures well the social and political ideals, and the overall culture and life of India. Quoting from philosopher Chaturvedi Badrinath who has written a book focusing on the Women of the Mahabharata, Dr. Mehra added that each of the women in the Mahabharat, in her own way, “is a teacher to mankind as to what truth and goodness in their many dimensions are.” Then she gave a brief introduction of the speaker and invited her to give her talk. 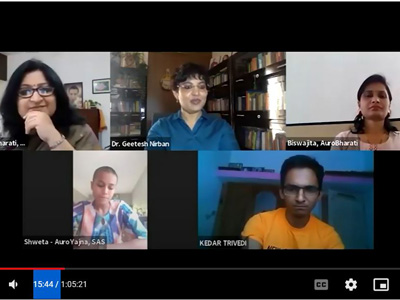 Dr. Nirban thanked the organisers for inviting her and right away said that the title of her talk – Virtues as Empowerment is significant because the real value of the virtue lies in its regular practice, which is what leads to true empowerment of the individual. And this, she said is the strength of the Mahabharata, because it is primarily a dharmashastras, a text which teaches the nuances and subtleties of dharma through a vast story involving a wide array of diverse characters. All these individual characters in the story are constantly striving to live a life of dharma – on individual and social levels. They may falter at times, but then they make amends and through that grow in dharma.

Speaking of the Mahabharata as a living tradition and a living, text, she added that this idea of human beings faltering, learning, evolving, growing makes the text highly relevant and unique because even when it speaks of what is often considered negative it does that in a very positive way. Dr. Nirban also shared a few more thoughts about the longest parva of the Mahabharata, Shanti Parva, which she said is one of the most beautiful reflection one will ever find on Peace without losing the sight of dharma. 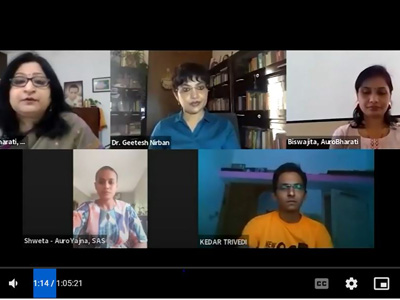 Dr. Nirban then focused on the women characters of the Mahabharata and said that in a way the storyline is almost always being driven by the women, and hence the epic can also be essentially seen as a Book of Women. The women of Mahabharata are noble and strong women, the true Sheroes, she said, invoking the term in contemporary use. It is the women of the Mahabharata who speak of the truth, who uphold the truth by practicing it in their lives – whether it is individual truth or truth concerning the social life of people.

Referring to the women of the Mahabharata as Dharmāchārini – those whose conduct is as per dharma, those live by the truth, Dr. Nirban said that it is this living of the truth that empowers these women and makes them stand out as teachers of the truth for the men characters in the story.

The first comprehensive narrative of a woman in Mahabharata is of Shakunta, our speaker said. She then went on to briefly summarise the story of Shakuntala, pointing out some key strengths of her character, namely, love, sincerity, care, intelligence, verbal competence, courage to stand for truth and speak truth, and more. Shakuntala is well-versed in the nuances of dharma and purushartha and finds true power in living a dharmic and truthful life.

Dr. Nirban reminds that audience that Shaktuntala does not fall in a state of hopelessness when faced with a tough situation. But she paves the way for herself and fights her own battle all by herself, with truth on her side. She is the virtue queen, who stands courageously in King Dushyant’s court and demands due rights for her son. Hers is the struggle of a single woman against tough circumstances. She is not the one to silently suffer the wrong that has been done to her. Rather she questions and interrogates the king and, in this way, promotes the living of a dharmic life.

One of the points Dr. Nirban emphasised in her presentation was that Shakuntala like several other women characters in the Mahabharata are politically conscious. They are also active participants in the wider life of the polity by raising strong sons and making them conscious of dharma. This way, they profoundly impact and shape society’s life.

Our guest speaker reminded the audience that Shakuntala becomes a teacher for Dushyanta when she reminds him that he must not only live the virtue of a good husband and father, but must be first and foremost a virtuous king who will speak and live the truth. She reminds the king of his duties toward his son, but also his duty to stand with the truth. By focusing on action and duty-consciousness, Shakuntala brings back the truth in Dushyant’s court, Dr. Nirban pointed out.

The audience members found the session highly engaging and inspiring. Here is some more feedback:

A recording of the lecture can be accessed here.

Dr. Geetesh Nirban is an Associate Professor of Philosophy, Kamala Nehru College at Univ of Delhi, and is academically interested in Ethics, Mindfulness, and Religious Studies. She is deeply interested in Mahābhārata with special research interests focusing on Values, Nature, Women and Eco/Feminism. After her Ph.D. from JNU, she was awarded the UGC Raman Post-Doctoral Fellowship for Mahābhārata Studies in USA.

She is the Co-Principal Investigator of the project on ‘Yoga Consciousnesses in Mahābhārata/ Bhagavadgītā: An Ethical Ideal for Political and Social Well-Being’ under the aegis of Ministry of Education and IIT Kharagpur.

Drawn by Shri Aurobindo’s Integral Yoga and Philosophy, she has visited Pondicherry and Sri Aurobindo Ashram several times and is learning French and Sanskrit. She is a fitness enthusiast and stands for Environmental Protection.