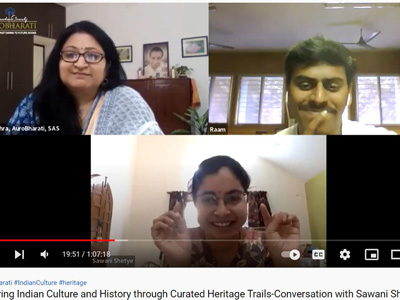 It is often said that there are three main ways to know India. First, and the best way, is to aspire to realise the truth behind India’s profound and life-affirming spiritual thought. Second is to identify with the deeper truths behind India’s countless stories, particularly the stories told in itihāsa-s (Ramayana and Mahabharata) and numerous purāna-s, kāvya-s and other dharma-shāstra-s and niti-shāstra-s.

And the third way is to travel through the length and breadth of India. The curious seeker can explore her richly diverse history and living heritage and experience first-hand the wide range of traditions and cultural practices. One will begin to appreciate how these traditions have been preserved over millennia and are also being given new forms with changing times and contexts. 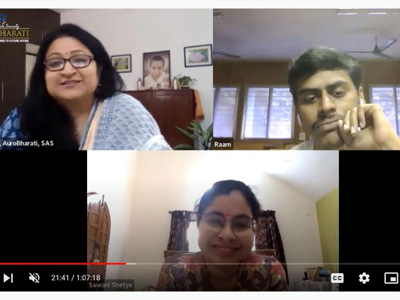 For this month’s Insightful Conversations at AuroBharati we invited Ms. Sawani Shetye, a young woman from Goa. She, in a way, combines all the three in her quest to relate to the deeper spirit of India and serve her motherland through her work. Ms. Shetye has been a student of Ancient Indian History and Archaeology, and has extensively explored the history and cultural heritage of Goa. Her love for history and her enthusiasm for travel, and most importantly her passion to share this interest with other enthusiasts led her to start a heritage consulting agency.

Teaching History through Stories and Experiences

Ms. Shetye shared with us what made her enthusiastic about the subject of history, and especially the history of her home state. We also discussed many interesting points about how history can be made an enjoyable learning experience for young minds.

Ms. Shetye has curated special heritage travel-based learning experiences for people in and around Goa. She has also conducted several heritage related workshops and courses for schools and colleges. Based on this experience she shared with us that one of the best ways to engage people with history and heritage is through the medium of stories. But these stories should be told in such a way which can help the listener see the continuing links between past and present. Another approach is to make history learning a living, dynamic, interactive experience such as through games – physical and virtual.

This reminds one of Sri Aurobindo’s words:

“We do not attach much importance to how many kings have ruled the country, which king came to power in which year and how long his reign lasted or the date when the Battle of Plassey was fought. What we teach, rather, is how in ancient times the Aryans formed the nation, how today’s Marathas became Marathas, how the Bengalis became Bengalis, how the Punjabis became Punjabis. Once the students have understood these things clearly, it does not matter if they fail to know the year of the Battle of Plassey.” (Sri Aurobindo, CWSA, Vol. 7, p. 814)

Travel that Educates: Example – Goa Beyond the Beaches 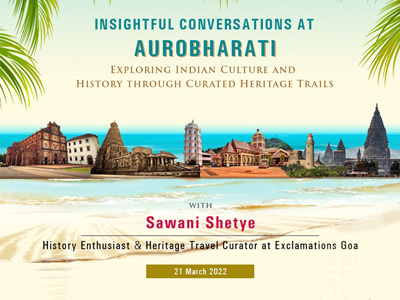 As a heritage travel curator, Ms. Shetye shed light on the effectiveness of culturally sensitive travel to educate people about their history and cultural heritage. Sharing about her experience of curating heritage trails for youth and children of Goa, she said that discovering a culturally rich side of Goa and its related historical context is generally an eye-opening for many of them. Because for long they too have been accustomed to seeing Goa through the lens of standard commercial promotion by tourism companies — that of being only or primarily as a ‘party place’.

We also discussed about what is unique about the history of Goa and also about Goan freedom movement. She shared some anecdotes about individuals who had come from far off places in India to fight with natives of Goa to secure its independence from the Portuguese colonialists and sacrificed their lives.

The ‘Goa Beyond the Beaches’ experience can often be a deeply educational one, especially for those who are interested in history and heritage. This became clear as our conversation continued. Sharing a few stories about Goan history, Ms. Shetye emphasised that learning about one’s history in a meaningful way can impact one’s sense of individual and collective identity.

Having a deep interest in Indian temple architecture, our guest also spoke about the uniqueness of temples of Goa. The temples’ history and connection with the sense of Hindu identity as it evolved during the most brutal colonial period of Goa made this part of the conversation highly informative. She shared about the Goan Hindu temples being ‘refugee’ temples in the sense that the deities had been forced to move to safer places due to colonial oppression. She added that often many Hindus in Goa are unaware of the painful history of their local temples.

Ms. Shetye recounted briefly the painful chapter on the history of temples of Goa. She said that during her trails when she shares stories about specific temples with her Goan clients, especially about how their ancestors risked their lives to protect the deities, she finds that often a new appreciation and a deeper reverence dawn on these young minds and hearts.

With her interest in history and temple architecture, Ms. Shetye has recently started making informative videos about temples to places she has personally visited in Karnataka. She shares them through her social media. She plans to make more informative videos in the near future, especially about the temples of Goa.

With travel opening up more and more now after two years, Ms. Shetye plans to curate more of heritage trails, particularly in other parts of India. As a young woman who has carved out her own path guided by her deep interest and passion to do some meaningful work for India’s rebirth, she also shared some practical words of advice for youth who are passionate about carving out a sustainable work opportunity based on their unique interests and through their work serve Mother India.

Several other points about how to encourage an appreciation of diverse histories and richness of our cultural heritage among the youth emerged during the conversation. For example, it is clear there is a need to ‘up the game’ with regard to heritage travel experience in India. This will motivate more domestic and international travellers to explore the richness of Indian culture and history.

Sawani Shetye has a master’s degree in Ancient Indian History and Culture and Archaeology from Deccan college, Pune. She is passionate about facilitating history and cultural awareness, and with this view she founded Bhoomij Heritage Consultancy. She also did additional studies in Archaeology of Buddhism and other culture related areas. She has also conducted courses and heritage related workshops for students at schools and colleges.

Sawani has deep interest in Indian temple architecture and Indian art in general. She has recently started making informative videos with an aim to reach younger generations of India and the world – to help them know a bit more about the depth of temple architecture and its iconography. Always on an ongoing journey of understanding the spirit and essence of India, Sawani currently works as a Curator at Exclamations Goa, a venture that helps travellers explore Goa beyond beaches.