Exploring the Chakras - Within a Transformative Paradigm with Dr. Soumitra Basu The programme was organised by NAMAH, the Journal of Integral Health from 31st January - 5th February 2022 where the Chakras were looked at as centres of consciousness from the perspective of Consciousness-based Psychology. Over 75 people enrolled for this event. This six-day programme became a space for exploring these centres of consciousness in detail and enabled participants from all walks of life to get a glimpse of different centres and how can one become aware of them and work towards aligning their lives around the Psychic Being.

On the first day of the workshop, Dr. Basu discussed the origin of chakras from a metaphysical perspective and explained the nature of reality as Satchitananda – one reality in different posies, Sat being the aspect of Self, Chit seen as Chit-Shakti and Ananda as the value aspect of creation. He further introduced the typal worlds and went on to explain the evolutionary and non-evolutionary worlds and the play of forces in formation of the chakras as centres of consciousness. 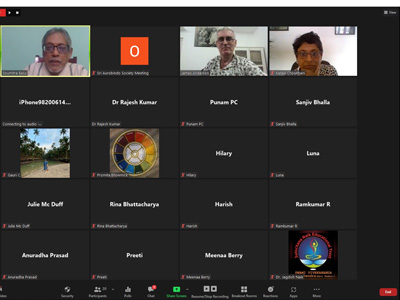 On day two, the psychological perspective was brought in and Dr. Basu shared with the participants how in Sri Aurobindo’s view; yoga of Vedanta and force of Tantra come together. A brief introduction of the Psychic Being and structure of the being was discussed to familiarise the participants with Sri Aurobindo’s view of the human personality and place of chakras in the subtle space as channels of communication between the inner and outer being. Dr Basu further elaborated on the dangers of working on the chakras without getting rid of the ego and the potential pitfalls on the way. He highlighted the key difference between the old and new method of activation of the chakras; old being activation from below- top and Sri Aurobindo’s method being top-below and key role of force of transformation in this method.

On day three, chakras at the base of spine and abdomen were the topic for discussion. Dr. Basu began with highlighting the importance of two movements; first movement towards the Psychic Being and the second movement of selecting the plane of consciousness one is comfortable and receptive to begin the work and establish the contact with the Psychic Being. He shared the conventional view of the chakras along with Sri Aurobindo’s view; the coiled Kundalini Shakti is waiting for conditions to manifest and the personal work at this point is to prepare the matter to bear the onrush of transformational forces that descend from the Superconscious. In Sri Aurobindo’s explanation, do not discard the lower vital but make it a play of Gods and use the creative vital energy to connect with the cosmic consciousness. 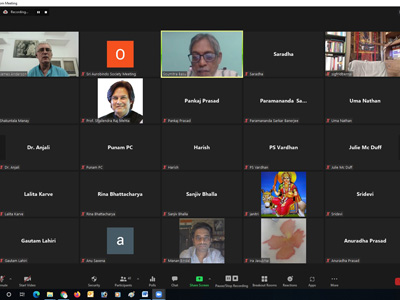 On day four, the session was on chakras of the Navel and the Heart wherein again the stress was laid down on the role and importance of Psychic Being while discussing the conventional and Sri Aurobindo’s view of these chakras. The Navel chakra is associated with the dynamism and a strong higher vital is required to work effectively in the world. Dr. Basu spoke about the importance of concentration on this chakra for controlling desires and passions, and the role of inner movement towards the true vital being in the process of purifying the vital and protecting it from the asuric forces that might lead to perversion. For the Heart chakra, while discussing the conventional and Sri Aurobindo’s view; element of Love emerged as the bases of all unity and concentration on the heart chakra not only intensifies purity but along with it helps in disentangling from the influences coming from the surface nature and connects the individual with the universal love.

The fifth day saw the role of Psychic Being in the chakra paradigm being discussed in detail and Dr. Basu shared why in Sri Aurobindo’s view of  surpassing the heart chakra and coming in contact with the Psychic Being is given importance; heart chakra has evolved from the Inconscience therefore carries intrinsic impurities whereas Psychic Being carries intrinsic purity. While speaking on the line of descent of supreme reality, Dr Basu described the Psychic Being as the evolving soul-spark that is the projection of the Jivatman and carries the most intense experiences of life. He also explained the difference between Jivatman as the static aspect and Psychic Being as the dynamic aspect of the Soul in man. The session ended with an exercise – concentration on the Psychic Being for all the participants to experience some element of Psychic presence within.

On the sixth day of the programme Dr. Basu presented on the remaining chakras; throat, forehead and head. For the throat chakra he explained; foundation of silence is essential for a meaningful speech to emerge and working on this chakra helps in improving the quality and vibration of the sound. The forehead chakra in Sri Aurobindo’s view represents royalty in terms of dignity and consciousness, and is a plane of vision and will. Dr Basu further went in depth to discuss the role of the crown chakra which symbolizes consolidation of spiritual progress where consciousness and force are aligned.

This continuous six-day exploration of different centers of consciousness was well received by the participants. Dr. Basu’s lucid and comprehensive presentations helped the participants in understanding the complex concepts with ease and gave them an opportunity to attempt building their connections with these different centres and work in the direction of purifying them. Transcending the ego and connecting to the Psychic Being for transformation emerged as the one of the key ideas from this six-day immersion, along with establishing the understanding of chakras as channels of communication between the inner and the outer being. The programme ended with a hope of a new creation and pointers to begin the journey of inner exploration by working on all parts of the being; silence and stability at the mental level, connection with the Pranamaya purusha at the vital level and developing the body consciousness at the physical level.

“Dr.. Basu is such a knowledgeable, generous and engrossing speaker, it was such a joy to listen to him. He has a very clear and comprehensive way of explaining this multi-layered and complex topic, he effortlessly goes from deeply metaphysical to practical suggestions. His slides complemented his talks very well, all of the material he presented is so valuable for my Sadhana and progress, much gratitude to him and James and NAMAH for a stellar workshop.

“Dr.Basu presented such a comprehensive look at the system of Chakras, comparing and contrasting the traditional view with Sri Aurobindo's and The Mother's view, and at the same time giving an overview of the entire foundation of Integral Yoga. He has packed so much valuable information in these six days, tying together so many concepts, there is much to absorb and read andpractise and be.”

“So much knowledge, several questions answered, several concepts clarified, some previously hard to grasp readings from Sri Aurobindo explained, so many things to incorporate in my practice and Sadhana, this was truly a beautiful experience!

“Dr. Basu is simply wonderful and I am so grateful to him for sharing his wealth of

knowledge and experience so generously, this workshop was truly a gift from The Mother! On Dr.Basu's suggestion, I read Nolini Da's article and although I cannot claim to say I understood it all, I am inspired to keep reading and aspiring and praying to Her for Her guidance and help every step of the way.”

“Thank you for the summaries, they are a good resource to have for reference in the future.”

“Yes… especially there are times – when one misses a point, the summary clarifies and connects the links.”

“I would love for Dr. Basu to conduct a workshop to explore the Ego and the Inconscience”.

“It has deeply touched me and put me back in touch with deep gratitude towards Mother and Sri Aurobindo who have worked through so much and organised and simplified so much. Dr.. Soumitra brought clarity and simplicity while conveying such complex information, and at times, though my rational mind could not grasp certain concepts – the quality of the workshop and atmosphere was such that something in me understood.”

“I had no idea about what the Chakras are in light of Integral Yoga. Hence this course was important to me.”

“It clarified to me the set-up of the planes and parts of the being, and their relationship with chakras, and cosmic consciousness, etc. It gave me a more holistic picture.”