Antaryatra – An Artist’s Journey Within 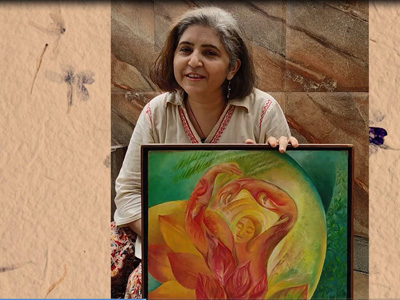 “All great artistic work proceeds from an act of intuition, not really an intellectual idea or a splendid imagination,—these are only mental translations,—but a direct intuition of some truth of life or being, some signiﬁcant form of that truth, some development of it in the mind of man.” (Sri Aurobindo, CWSA, Vol. 20, p. 266)

For this month’s edition of Insightful Conversations at AuroBharati, we feature an artist whose work embodies the spirit of artistic creativity that Sri Aurobindo expresses in the above-mentioned quote. This is a forum where we bring conversations with individuals from various domains of activity, who have been consciously embodying in their work the essence of Indian cultural spirit giving new forms and expression. 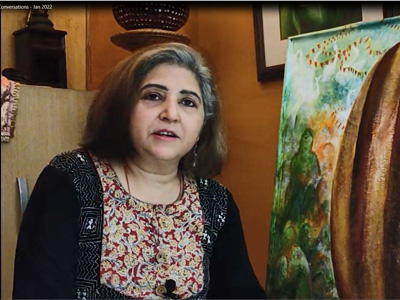 Delhi-based artist Bindu Popli is our guest today. For the last 30 years she has been immersed in creating art that comes from a place deep within her.

An introspective, contemplative bent of mind and an urge to give artistic and creative expression to all that she was experiencing and feeling – these two attitudes have been part of Bindu’s temperament since her adolescence. She completed a rigorous formal education in painting at Delhi College of Art. Her paintings received high reviews, acclaims and awards during the various solo and group exhibits where she showcased her work. But over time as her inner journey took precedence than seeking outer recognition, her art and artistic process also evolved.

Indian Art and the Soul of Things

As Bindu tells us in this conversation, with a deepening of her meditations, her inner experiences started to express more and more in colours and forms subtly portraying the ethereal and the subliminal, and even the formless. One may say that over the years, her art has increasingly become an expression of and simultaneously an offering to the truth within her.

Sri Aurobindo once said that Indian Art demands of the artist the power of communion with the soul of things. For an artist who has truly cultivated within her an Indian approach to creating art, the sense of spiritual takes precedence over the sense of material beauty. Fidelity to the deeper vision within is most important for such an artist. In many ways Bindu Popli, embodies this spirit as we learn from this conversation and see some of her work.

The Spiritual Aim of Art 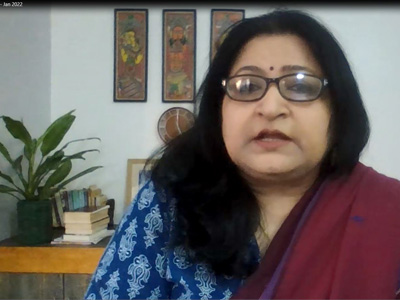 The highest Indian art is identical in its spiritual aim and principle with the rest of Indian culture, says Sri Aurobindo. This spiritual aim of art is not forgotten even on the level of material world, the outer life of man and the things of external Nature.

In most good works of Indian art, there is always something more in which the material presentation of life ﬂoats as in an immaterial atmosphere. Life is seen in some suggestion of the inﬁnite or of something beyond, or at the minimum, there is at least a touch and inﬂuence of these which helps to shape the artist’s presentation, according to Sri Aurobindo.

We hear the same idea expressed by our guest as she speaks of what inspires her, the attitude with which she takes up her painting, and her whole approach to art and life. She tells us – “For me painting is flowering, not making. The unknown world unfolds itself.”

Truth of the Essence of the Form

According to Sri Aurobindo, when we see a great work of Indian art — a painting or a sculpture — the truth, the exact likeness or resemblance is there, the correspondence, sādṛśya, but it is the truth of the essence of the form, it is the likeness of the soul to itself, the reproduction of the subtle embodiment which is the basis of the physical embodiment, the purer and finer subtle body of an object which is the very expression of its own essential nature, svabhāva.

The means by which this effect is produced is characteristic of the inward vision of the Indian mind. It is done by a bold and ﬁrm insistence on the pure and strong outline and a total suppression of everything that would interfere with its boldness, strength and purity or would blur over and dilute the intense signiﬁcance of the line.

For example, as Sri Aurobindo explains, in the treatment of the human figure, an Indian artist minimises or disregards all corporeal ﬁlling in of the outline by insistence on the ﬂesh, the muscle, and other anatomical details. The strong subtle lines and pure shapes which make the humanity of the human form are alone brought into relief.

We see this approach in much of Bindu Popli’s painting technique.

A New Approach to Conversation

As is often the case with such inward-oriented artists, Bindu was also initially hesitant to come online for a conversation about her art. This made us come up with a different, a more creative approach. A short list of questions was sent to her, and she filmed short video recordings with her responses to these questions.

Her eloquent and contemplative responses along with some inspiring words from Sri Aurobindo and the Mother were put together in this video shared here.

This new approach to hosting a conversation actually added much value. It gave us a glimpse into Bindu’s art studio in Delhi where she did the recordings. Also, we were able to have a close look at some of her artworks including some of her recent paintings – all of which would have been somewhat difficult to do in a standard online recording. 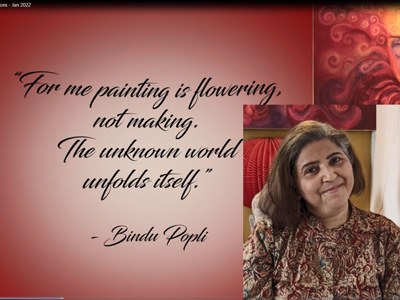 Bindu Popli is a Delhi-based artist and art educator. She holds a Bachelor’s in Fine Arts with specialisation in painting from Delhi College of Art. During her 4 years there, she received several prestigious awards and scholarships. A recipient of M. F. Hussain gold medal and also of National Scholarship from Ministry of Human Resources, she has also trained with artists of great acclaim.

Over the years Bindu’s work has been shown in several solo and joint exhibitions, where it received high reviews and acclaim. She currently is the Head of the Art Department at a large school in Delhi and also conducts painting workshops for various groups.