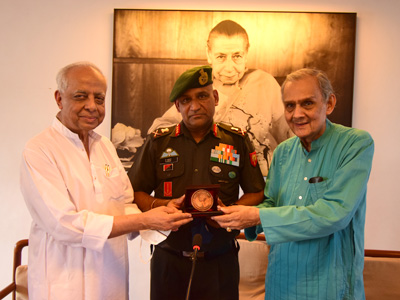 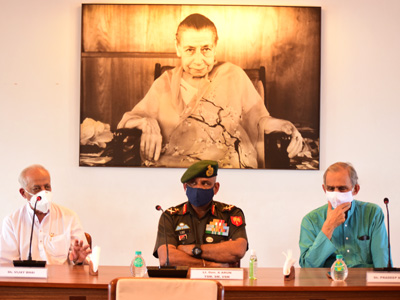 Later Mr. Pradeep Prem spoke on the areas where Sri Aurobindo Society would require the support of the Indian Army.  Sri Aurobindo Society has plans for the ex-servicemen and their families in teaching them organic farming, technology, and the marketing of their products to the outside world.  Secondly, training the rural youth both boys and girls of Puducherry physically, mentally, and psychologically and making them ready for joining the Indian army.

Thirdly, Sri Aurobindo Society to associate with the Indian Army to create a university where upskilling, reskilling, and cross-skilling will be carried for the ex-servicemen and prepare them job-ready for the wide job market.

While talking to the team, Lt. A. Arun quoted, “Everybody is a leader,” and “Leadership is all about influencing people.” He assured that the Indian Army will associate with Sri Aurobindo Society in all possible ways for the benefit of the youth and all the citizens. 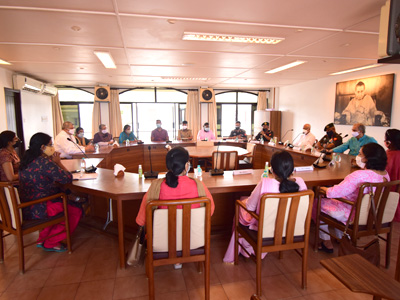 He also said that the army schools can be involved in some initiatives.

The Dakshin Bharat Army officers and their other counterparts were given mementos by the SAS team. As part of the prison reformation initiative of Sri Aurobindo Society and the Puducherry Prison, an idol of Lord Ganesh made by the inmates of the Puducherry Prison was gifted to the Lt. Gen.

Shri Pradeep Narang, Chairman, Sri Aurobindo Society gave the vote of thanks.  In his speech, he recollected his personal experiences with some of the army officers and some army officials who had come to meet the Mother during wartime.

Lt. Gen. Arun gifted his medals as a token of love to the society and the Central Prison, Puducherry.