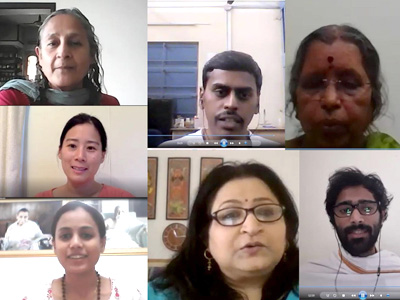 The Mother once said that reading the words of Sri Aurobindo “opens the doors of the future to us” (CWM, 12: 214). She also advises – “It is not by books that Sri Aurobindo ought to be studied but by subjects — what he has said on the Divine, on Unity, on religion, on evolution, on education, on self-perfection, on supermind, etc., etc.” (CWM, 12: 208).

Keeping these words as our inspiration AuroBharati and AuroYajna came together to start a series of Svādhyāya or study groups focused around a selected topic. The aim of ‘Svādhyāya: Study, Reflect and Grow Within’ is to give interested seekers and participants an opportunity to experience the Living Force and Power of the Words of Sri Aurobindo and the Mother through a focused programme which involves self-study and a weekly shared reflection session which happens online.  Participants are informed of the selected readings a week in advance.

To facilitate a deeper reflection on a specific topic, each Svādhyāya round lasts several weeks. 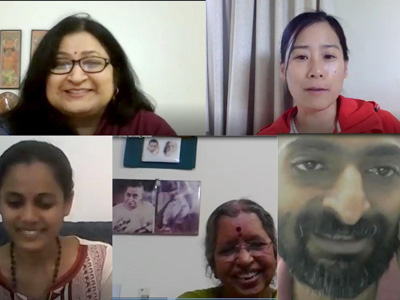 We recently finished a 3-week-long Round 2 of Svādhyāya on the topic – Money and Yoga. For this study group, our primary readings were selected from various works of Sri Aurobindo and the Mother.

The first online session of Round 2 of Svadhyaya was on December 4, 2021, in which about 12 people signed up. An online email group was created with all the members, which was used to share the assigned readings for every week.

The online reflection sessions were facilitated by Beloo Mehra and Shweta Shekhar. The sessions began with Beloo Mehra sharing a brief comment about the week’s readings or highlighting some specific points. Participants were encouraged to share what key points from the readings resonated most deeply with them and why.

A safe and comfortable space was created where participants could freely share what they received from the readings and how it helped them understand the rightful place of money in their lives. One of the most significant learnings for the group was that money is a force. Sri Aurobindo’s and Mother’s explanations about the nature of money as a force and how it needs to be conquered and put at the service of the Divine became a deep source of reflection for the participants. Another idea that money should be kept in circulation also generated some good discussion.

It was also pointed out that many of the insights we find in the writings of Sri Aurobindo and the Mother also find resonance in the ancient Indian wisdom on money – as found in our itihasa-s, dharmashastra-s and nitishastra-s.

Several participants shared how some of the words of Sri Aurobindo and the Mother were helping them unpack some personal questions about the right attitude to have toward money, savings, life and health insurance, faith and trust in the Divine and a sense of surrender when it comes to planning for future security.

One of the participants from Auroville who has professional training in financial planning shared some interesting information about the evolving nature of money in recent times and how things like cryptocurrency etc. are still driven by the old ego-based consciousness and greed. He also mentioned developments like gift economy and other experiments going on all over the world which are trying to bring in a new approach to thinking about money and its use.

The group also shared reflections on poverty, charity, and the right spirit of giving. The Mother’s writings and conversations on these topics provided much clarity as we discussed these matters. An open-hearted and completely non-judgmental approach was encouraged and practiced throughout.

During all our sessions we paid close attention that all these reflections and discussions were happening in the light of Sri Aurobindo’s and Mother’s vision for a transformed earthly life, and for a more harmonious future society.

One participant who couldn’t join the online sessions sent his reflections in writing before each session. Here is one such reflection shared by this participant:

“Coming back to the topic of discussion, Money and Yoga, this “visible sign of a universal force” which “in its origin and in its true action it belongs to the Divine”, the sadhaks of humanity, should earn money not for the satisfaction of their ego and fulfillment of their vital desires, but for “its true action” in the world. What can be the guideline for it for us then? The hint of it is there in the Bhagavadgita (Chap. III.20):

“It was by works that Janaka and the rest attained to perfection. You should do works regarding also the holding together of the peoples.

“In my view, this work “for holding together, लोकसंग्रहाय”, shall be to find out the practical and material causes of a social phenomenon and look further for its material factors. This appears in the Purushsukta of the Veda where the fourfold order is described viz. the Brahmins (men of knowledge), the Kshatriyas (men of power), the Vaishyas (the producers, and support of the society) and the Shudras (the givers of all kinds of manual services). This caturvarnya is the foundational quad for the stable body of race of Man.

“Simply stated, it will be for (1) the common citizens in a society, to hold together, as their Dharma, their small families and the neighbours, and (2) for the administrator (or a  delegated/chosen ruler) and the protector, to hold together the race in a nation as one nation-soul and, globally, in the comity of nations, the whole family of variegated nation-souls.

“The universal force (of money) is thus for the whole family of man on earth. The exchequer wealth of a nation and the personal wealth (money force) of individuals, hopefully gained by no unethical means, shall be intelligently used to keep the coming generations in the family and nation holistically minded, healthy, culturally well groomed, and civilized as a race of the children of the same Divine Mother.”