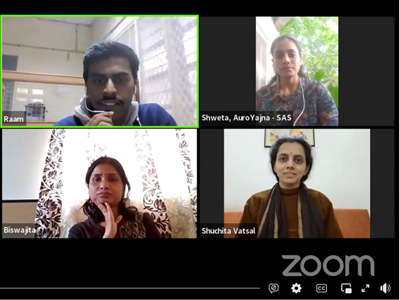 For the fourth lecture in the series, we invited Mr. Aravindan Neelakandan who presented a brief overview on a very important topic – Divine Feminine in Tamil Literature. February being the birth-month of the Mother, this topic was a most befitting choice for this event. 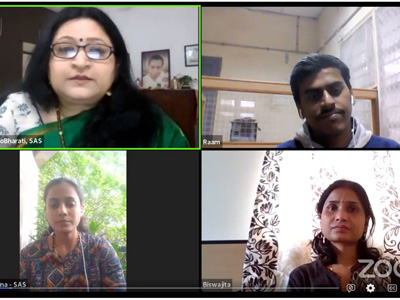 After a moment of silence invoking the Mother’s presence, the event opened with brief welcome remarks by Dr. Beloo Mehra of AuroBharati, followed by an introduction of the speaker by Mr. Raamkumar of AuroBharati.

Mr. Aravindan Neelakandan began his lecture with an emphasis that while in the Western theological and religious-spiritual tradition the idea of Divine Feminine is often seen as an alternative to the patriarchal notions of Divine Being and institutionalised religion, in Indian religious-spiritual tradition throughout this land, the Divine Feminine has been not only an integral part of the whole tradition but rather the foundational basis in many significant ways. And we see numerous evidence of this in our literary traditions throughout the Indian cultural landscape.

Bringing the focus to the Tamil literary tradition, the speaker made an important point that any attempt to portray Tamil cultural and religious-spiritual traditions as somehow different or separate from the Vedic foundation of Indian cultural tradition is not only erroneous but also dangerously divisive.

He then walked the audience through a long period over which Tamil literary tradition has evolved starting from the Sangam age to Shaiva poet-saints such as Tirujnana Sambandar and Karaikkal Ammeiyar to modern poets such as Abhirami Pattar and Subramaniam Bharati. Even with a brief snapshot that he could present given the time constraint, the impact made through his presentation and the examples he chose were highly educative and inspiring.

He shared delightful examples from various key works of several poets including the Tamil epic Silappatikāram to demonstrate how the Goddess worship has not only been a predominant aspect of the cultural milieu throughout the history of Tamil people, but has also transcended the artificially-constructed binaries (thanks to westernised Indological frameworks) of tribal vs. high/classical culture. He also helped the audience see a cultural continuity in the way visionary poets in India across long periods of time and large geographical distances have envisioned and described similar images when it comes to the representations of Lord and Shakti as Two That are One.

The event ended with several audience members appreciating the lecture and congratulating the speaker for invoking the Goddess’ presence through his presentation. Some audience members also felt that it is unfortunate that most students in India today are not exposed to such literary gems, and thus remain unaware of the richness and depth of our cultural tradition.

The lecture was also live-streamed on Sri Aurobindo Society’s Facebook page, where so far it has reached out to more than 750 people. (Accessible here).

Watch the video here for the full lecture. 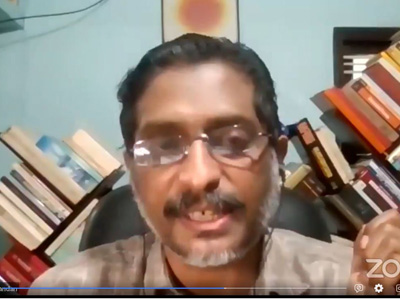 Aravindan Neelakandan is a prolific bilingual author-journalist – writing in English and Tamil – with his writings published in numerous magazines, journals, and media outlets. He is especially famous for the ground-breaking book Breaking India, which he co-authored with Rajiv Malhotra and which was in the list of top 10 bestsellers books in India in 2011.

In 2021, he was appointed a member of the Governing Board of Auroville Foundation by the Government of India.

Aravindan began his writing career with his articles on science and Indology in the famous Tamil portal Thinnai.com. He has been a regular contributor of columns to UPI Asia and other Tamil magazines and newspapers. He is also a contributing editor at Swarajya magazine at present. His writings mostly explore various aspects of Indian culture and contemporary challenges, as well as science, technology and philosophy of science and history.