From Vedanta to Sri Aurobindo – A Youth’s Seeking for Truth 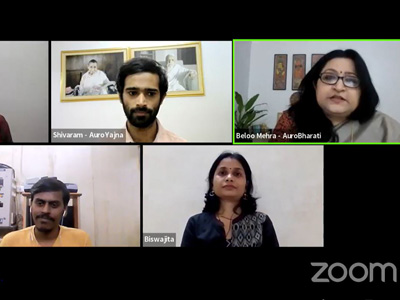 “It is the young who must be the builders of the new world,—not those who accept the competitive individualism, the capitalism or the materialistic communism of the West as India’s future ideal, nor those who are enslaved to old religious formulas and cannot believe in the acceptance and transformation of life by the spirit, but all who are free in mind and heart to accept a completer truth and labour for a greater ideal. … They will need to consecrate their lives to an exceeding of their lower self, to the realisation of God in themselves and in all human beings and to a whole-minded and indefatigable labour for the nation and for humanity.” (Sri Aurobindo) 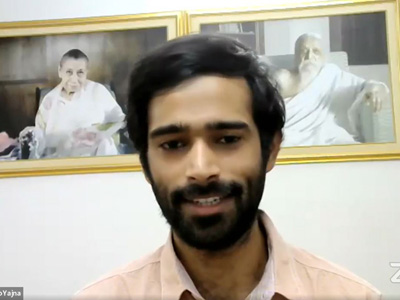 As part of Sri Aurobindo Society’s ongoing celebrations of Sri Aurobindo’s 150th Birth Anniversary (August 15, 2021 to August 15, 2022), AuroBharati and AuroYajna have been organising a series of Special Lectures organised under the Theme: India – Our Mother. The first lecture in the series was on the topic - “Ayurveda and Yoga in Indian Temple Sculptures”, delivered by Ms. Rekha Rao on October 31, 2021. A recording of that event can be accessed here.

The second lecture titled “From Vedanta to Sri Aurobindo – A Youth’s Seeking for Truth” was delivered by Dr. Shivaram Prasad on November 28, 2021. The topic was chosen for its great relevance for the rebirth or renaissance of India.

Our youth’s reawakening to the essential spirit of India is really the need of the hour if a new India has to be born. The topic fit in perfectly with the vision statement of AuroBharati – “From Past Dawns to Future Noons” – a phrase taken from a very famous sentence from Sri Aurobindo’s Essays on the Gita – “We do not belong to the past dawns, but to the noons of the future.” 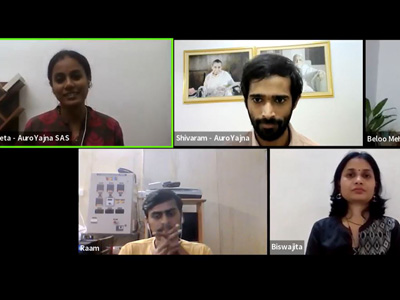 Dr. Shivaram Prasad is a graduate in dental surgery and is currently pursuing a Master's degree in Yogic Sciences from SVYASA, Bangalore. An explorer of life, a sadhak, and a research associate at AuroYajna, he is a keen student of Advaita Vedanta, Mahabharata and Sri Aurobindo's Integral Yoga.

During the lecture he shared briefly his journey of seeking, a kind of quest he has been on since his teenage. He talked about the questions he was living with for a long time, questions about purpose of his life, about the nature and kind of pursuits he should have to have a more meaningful and deeply fulfilled life, and other related things. He spoke about how through his study and introspection, he gradually came to discover and slowly comprehend the true significance of timeless Indic concepts such as Purushartha, which gave him the right framework to organise his life’s pursuits. All this began to give a new direction to his life and work. 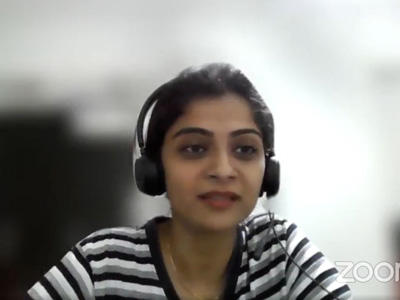 Dr. Prasad shared about what he was learning and realising about the concept of Dharma (which he strongly emphasised is not same as Religion) and its significance for understanding the deeper evolutionary aim of human life – different from other living beings on the planet. His systematic studies in Vedanta through some online courses as well as his svādhyāya helped him clarify further and gain a right footing from where to explore other questions such as the meaning of maya, the nature of consciousness, and the mystery of evolution. It was when he discovered the writings of Sri Aurobindo that he started to find clearer answers for such questions. The truth of ‘All Life is Yoga’ spoke to his inmost being and ever since he has been going deeper into his study of Sri Aurobindo’s works on Indian scriptures as well as Integral Yoga.

The simplicity and straightforwardness of Dr. Prasad’s explanations, along with some easy-to-understand examples made the session highly inspiring and relatable. About 25 participants had joined this online event organised on Zoom. The lecture was also live-streamed on Renaissance-AuroBharati’s Facebook page, where so far it has reached out to more than 700 people. (Accessible here). 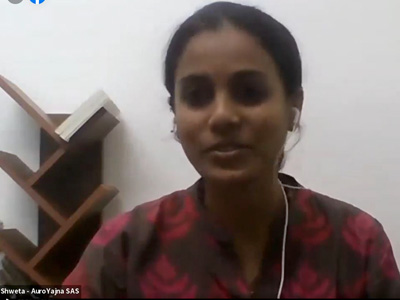 A few questions were asked by the participants concerning the challenges faced by the youth in general, to which the speaker generously provided helpful clarifications with examples based on his experiences and observations. The session was appreciated by all.