Ayurveda and Yoga in Indian Temple Sculptures – A Special Lecture 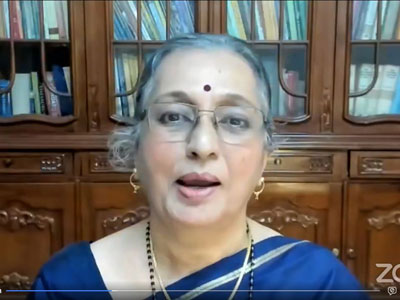 India – Our Mother is an over-arching theme for Sri Aurobindo Society under which it has been and will be organizing various programmes for this one year of special celebrations. These programmes and events represent various domains of activity, all of which with one common aim that they will serve toward the ongoing regeneration or renaissance of India – whether it has to do with any aspect of her outer body, her evolving social-cultural landscape, or her deep inner temperament and unique genius. The series of public lectures jointly organized by AuroBharati and AuroYajna, which started on October 31, 2021 will include various topics that have to do with the spirit and forms of Indian culture.

Our first lecture was titled “Ayurveda and Yoga in Indian Temple Sculptures”, a topic that beautifully intersected the realms of health and healing and Indian art and sculpture. Ms. Rekha Rao was the invited speaker.

Ms. Rao has conducted extensive research on this topic. As an independent scholar, she has closely studied various types of sculptures in temples across the length and breadth of India, and is the author of several books including ‘Therapeutics in Indian Sculptures, Rani ki vav-Patan,’ ‘Ayurveda in Indian Temples: Depiction of Herbal Medicines through Apsaras and Shalabhanjikas’, and ‘Yoga in Indian Temple Sculptures: A New Perspective’. 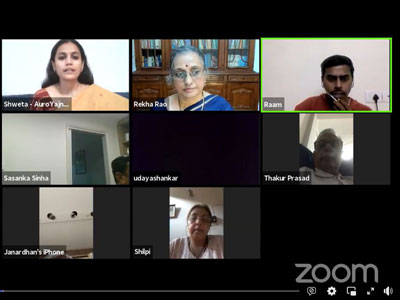 In her opening remarks, Dr. Beloo Mehra from AuroBharati briefly introduced AuroBharati’s focus area and the theme of this lecture series. She added that the topic of this first public lecture wonderfully coincided with the festival of Dhanatrayodashi or Dhanteras (November 2) – the day that marks the emergence of Lord Dhanvantri, the god of healing, the divine source and origin of Ayurveda. Ms. Shweta Shekhar then briefly introduced the vision of AuroYajna. Mr. Raamkumar Loganathan introduced the speaker.

At the beginning of her lecture, Ms. Rekha Rao gave a quick overview of the key scriptures of the Vedic or Sanatana Dharma tradition in order to highlight where Ayurveda and Yoga are placed in the overall Indian knowledge systems.

In the first part of her lecture, she focused on how knowledge of Ayurveda has been depicted through various sculptures in Indian temples. She spoke of shalabhanjikas and other figures which were very consciously sculpted to highlight and promote the knowledge of Ayurvedic and other natural medicinal systems. She had selected several representative pictures from various Buddhist and Hindu temples to give specific examples. Giving details of what plant – its leaves, fruit, bark, etc – is used for what specific purpose (either as preventive, curative or restorative medicine), she pointed out specific sculptures which demonstrate this wealth of knowledge. 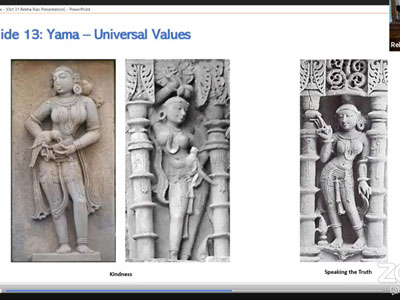 In the second part of her lecture, Ms. Rao focused on Yoga as represented in temple sculptures. After a brief introduction to Yoga as one of the Indian shad-darshana (six schools of philosophy), she zoomed in on Patanjali’s Yogasutras where we find the Ashtanga Yoga or Eight-limbed Yoga. She then pointed out for the audience examples of sculptures where selected aspects of each of the eight limbs – Yama, Niyama, Asana, Pranayama, Pratyahara, Dharana, Dhyana, and Samadhi – are carved in stone.

The clarity of Ms. Rao’s explanations along with a well-designed presentation with highly appropriate examples made the session highly informative and educative. The feedback received from several members of the audience was very positive. A few participants asked for some further clarifications which Ms. Rao generously provided. 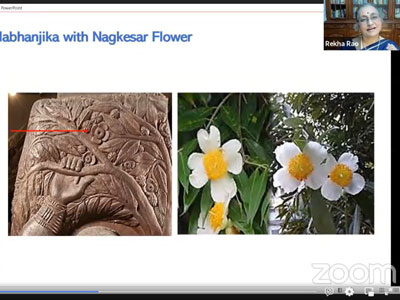 About 40 participants had joined this online event organised on Zoom. The lecture was also live-streamed on Sri Aurobindo Society’s Facebook page, where in the last 4 days it has already received around 350 views reaching out to about 600 people. (Accessible HERE). 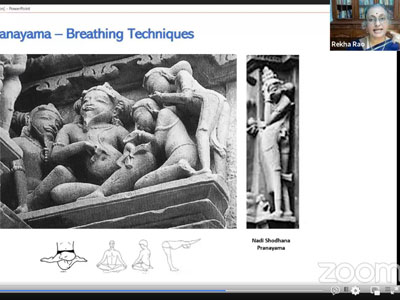 Here is some feedback received on the lecture: