By closely observing your own character, become aware of what needs to be transformed in order to achieve the ideal condition. 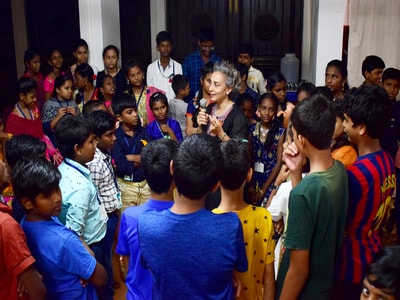 The Mother encouraged greatly the development of the audio-visual medium. She believed that it was a powerful instrument which had to be used at the service of the Divine.

The Mother encouraged greatly the development of the audio-visual medium. She believed that it was a powerful instrument which had to be used at the service of the Divine. About how to see a film, She says, "If you look mentally, the interest is no more the same; instead of being moved or troubled, you can judge quietly the value of the film, whether it is well constructed and well

acted and whether the pictures have any artistic value." Around 80 children from 22 schools of Puducherry took part in this film festival. Children from all types of schools like the Government schools, Government-aided schools, private schools and also children from special schools like the Satya Special School were a part of this event.  All the children were very prompt and started assembling in the hall around 9:30 a.m., which showed their expectations and enthusiasm in watching the movies.

The children were greeted with a toffee and Tsunamika - A living symbol of hope. The children happily pinned it up on their dresses.   Shri. Manoj Kumar Agarwal graciously accepted to inaugurate the Aura Children’s Film Festival.  The festival began with a unique style of inauguration at 9:45 a.m.  A plant of Madagascar periwinkle, (spiritual significance given by The Mother is “Progress –This is why we are on earth”) was watered by him first.  He spoke to the children about the benefits of planting trees for a greener and healthier environment and also on deforestation.  He wanted the kids also to participate in this and representatives of all schools watered the plant along with him. The gathering was welcomed by Ms. Suman Kittur, the Festival’s Artistic Director. Around 13 films, some documentaries, animation and some short and educational films were screened. Each film conveyed a positive message to the children, which could be very well felt during their discussions after every film. There was a short discussion after each movie and the children told their understanding and their takeaway from the movie.  Each child was given a chance to come out freely with their opinion.

Language was not a barrier at the Film Festival.  All films visually spoke the story and the children were all pinned to their seats.  Movies ranging from world cinema to local language were chosen, which do not require a particular language to be known. There were Korean, Iranian, English, Tamil and silent movies in the Auro Children’s Film Festival. Children were then shown prequel of documentaries like “Blue Planet” and “Seven Worlds, One Planet”. These films educated them about various living beings and the wonderful aspects of nature. Animals and underwater creatures which they have not seen so far and the beauty of nature were explored through these films. This helped the kids to know the hidden vastness of nature and its beauty.

The children then watched a film called “Spring” and after this movie, Ms. Kavita Dutta, an animal rights activist, spoke to the children about caring for the animals and she gave small tips for the children about animal care and children listened to her enthusiastically.  She also insisted kids on reducing the usage of plastics for a better and greener environment.  She concluded her session by giving some stretching exercises to the kids as this was a day-long event and therefore conscious breaks were given to children at regular intervals to avoid exposure to the screen always.

They were also shown many other films like “5 Rupees”. Children very well responded to this film which spoke about the innocence of a village child from a poor family background to play with a balloon and how genuinely he takes efforts and collects money to buy that balloon without troubling his mother.

Another documentary on the life of Elephants shown. Later, an Iranian movie “Children of Heaven” was screened. This was a world-class movie and the children grasped the essence of this film very well by understanding that they should be helping their family and also learn to share and care for their siblings.

The children enjoyed and as well learned a lot through the films screened. The main objective of this Film Festival was to create awareness among the children about society and also to imbibe in them some moral values.

Snacks and lunch were taken care of by the AuroMedia team for all the children and the teachers who accompanied them.

Post lunch, Sushanto Nath, conducted a silent activity for the children to help them relax mentally and physically.

The children were very excited throughout the day and the teachers too were very happy with the variety of cinema that was exposed to their children. The festival concluded at 5:00 p.m. by getting some feedback from the children and the teachers.   The teachers, parents and the children thanked the organizers, Ms. Suman Kittur and Ms. Shruti Ramteke and their entire team for giving them such a memorable day in their life.  They said that this day will be remembered on all Children’s Day in the upcoming years.