Widen your consciousness to the dimension of the earth and you will have a place for everything. 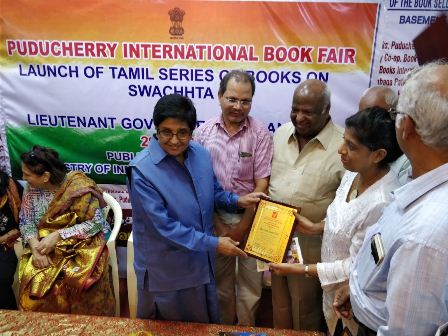 AuroPublications participated in the Second International Book Fair 2017 organized by The Puducherry Writers Book Society at Vel. Sokkanathan Thirumana Nilayam in Puducherry from December 22 to 31, 2017.

It won the Best Stall Award 2017 among around 90 publishers and book sellers who participated in the Fair from across the country and abroad. Lieutenant Governor (Puducherry) Ms Kiran Bedi handed over the award to Vivechana at a ceremony held at the Book Fair venue on December 29, 2017. The organizers selected eight stalls for the Best Stall Award this year.

Book lovers were drawn to several titles displayed at the aesthetically decorated AuroPublications stall and bought books on Education, Indian Culture and the Mother and Sri Aurobindo among others, both in Tamil and English.

More than a dozen volunteers from the Society worked tirelessly to make the event joyful and a great success.

The AuroPublications website (https://www.auropublications.org/) has listings of all our titles in English and in several other languages including in Bengali, Hindi, Tamil, Oriya and German. The website also has ‘Inspirational Gifts’ and a few e-book titles which can be downloaded for free.