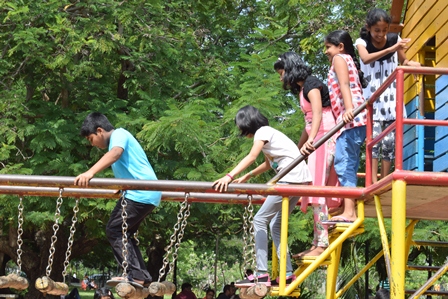 All India Children’s Camp – ‘Rainbow Dreams’ was organized by Sri Aurobindo Society, Puducherry, at its Society Hall in Puducherry from 2 to 9 October, 2017.  The camp, coordinated by Sushanto & team, was designed to serve as a playground for children and facilitators alike, and was attended by 24 children between the age group of 7 and 12 from all across India.

As observed, throughout the world and in all cultures, children love to play and in playing they learn instinctively. Especially in play they become free from concepts of winning and losing and become more sensitized towards themselves and whomsoever and whatsoever they come in contact with.  They develop holistically, engaging their bodies, minds, emotions and get closer towards their deeper self.

In the camp, through various activities, the facilitators aimed to create an environment where the children could invest boundless energy and concentration in exploring various aspects of their selves and their surroundings. This enabled to create a space in the children’s lives that is magical, transcendental, edifying and deeply satisfying. It also provided the necessary exposure to the children where they got to taste the joy of learning independently as discoverers, sensitive explorers orienting them to find their true nature and action.

The camp schedule was drafted in a manner by which the children were exposed to the same subject and theme every day yet with the introduction of a new element and dimension to make the activity more engaging.

All the eight days of the camp began with the children visiting the Ashram to gather themselves for the day’s activities.

Both chanting and music were regular activities throughout.  Programmes started with chanting of slokas in Sanskrit during which the children chanted few hymns as an invocation and also learnt new Sanskrit words. They gained insight into the richness and value of the language so synonymous with the culture and heritage of India.

The music with dance sessions gave the children freedom to express themselves via different movements thereby enabling them to overcome inhibition. These free movements combined synchronized music with various musical instruments and steps to the beats of diverse folk music from different parts India. The children, having overcome their tentativeness and constraints, marched and danced to the rhythms played.

To allow the unhindered flow of creativity, the children took up different projects where they had options of creating patterns on paper, colouring – giving wings to their creative energy thereby breaking the monotony of certain fixed ideas of drawing and painting in a set structure.

The children also enjoyed the paper craft session wherein they learnt how waste could truly become wealth by making useful and beautiful items out of newspapers. They were indeed overwhelmed with the sheer joy of finding beauty in something so commonplace!

Making dreams catchers, a handmade craft belonging to Native American tribes, was another session that fascinated the participants. This again was done with materials easily available like colourful wool and threads intricately woven to form delicate hanging patterns embellished with beads and feathers. This helped the children to develop their concentration and refinement of motor skills.

There was also a clay modeling session in which the children used clay as a medium to develop their creative capacity, senses, tactile perception, visual perception and dexterity by manipulating the tools and clay.

There were sessions focused on indoor games with a set of games conceived by a team specializing in developing educational games. These games included a fun way of learning thereby enhancing memory, attention span, alacrity and cognition in the children.

There were also outdoor sports where the children freely ran and played about enthusiastically.

A session on concentration with candles brought out a different dimension in the participants’ process of learning.

There were also sessions such as Fun with Maths, Storytelling, Dramatics which the children enjoyed immensely.

A special session on water was presented to focus on the perils of water scarcity across the world, particularly in India, where agitation over the water crisis has already begun. There was considerable emphasis, during this session, on the utmost importance of saving water and the prudent use of water so as to save this precious commodity for the future.

The children enjoyed an entire day out in the garden and a farm adjacent to the lake in Puducherry where they spent their time amidst the beauty of nature.

The children’s excitement went beyond control when they were taken to the sea beach to play in the sand and water.

The camp concluded with a splendid cultural programme presented by the children followed by the distribution of certificates and souvenirs.

Apart from the coordinators, other facilitators of the camp were Shanker, Surabhi, Ravishanker, Dilip, Padma, Shivkumar, Sampadananda, Vivechana, Romila and Kavita.