Widen your consciousness to the dimension of the earth and you will have a place for everything.

SPANDANA—Level I: An Intensive Sanskrit Workshop for Beginners 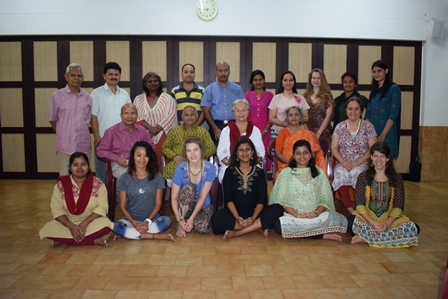 From January 22 to 28, 2017, Sri Aurobindo Foundation for Indian Culture (SAFIC) conducted a week-long course on introducing Sanskrit for people interested in learning the Sanskrit language, both in the spoken as well as the written form. There were 15 participants, from India and abroad, who attended this workshop.

In order to have the participants get a holistic view of the Sanskrit language, the topics that were introduced during this workshop were structured in a way such as to inspire an interested learner to take up the language. There were two sessions dedicated to the Sanskrit alphabet (Varnamala) wherein the logic, science and philosophy behind the letters of the language were explained. A session on the ‘System of Root Sounds in the Sanskrit language’ brought out the philosophy of the usage of words and the concept of root-sounds and seed-sounds, each sound carrying within itself a meaning and a force. The idea that metres (Chandas) in Sanskrit poetry reflect the universal cosmic metre was brought out beautifully through the illustration of certain examples in Sanskrit poetry. There were two sessions on Sanskrit grammar (Vyakaranam) that gave an insight into some of the basic guidelines to follow while reading and writing Sanskrit. A session on Sanskrit resources online showcased the diversity of materials available on the Internet that the participants can make use of for their progress in their journey of learning the language.

The essential focus of this workshop was on the conversation form of the language. Every day, two sessions were dedicated towards speaking in Sanskrit (Sambhasanam) where a certain group of words, pertaining to verbal forms, time, numbers, everyday items, etc., would be introduced to the participants and attempts would be made to construct and speak Sanskrit sentences. Group activities introduced during the workshop did much to boost the confidence levels of the participants in speaking Sanskrit – these included group discussions, singing of nursery rhymes and writing simple stories in Sanskrit. One of the interesting activities recently introduced is a session on Sanskrit conversations. The participants were divided into groups of two, and were asked to converse with their buddies in Sanskrit, following which they would write down their dialogues and present them in front of the remainder of the group.

At the beginning of each day of the workshop, there would be a 45-minutes session on Mantra Yoga where selected mantras were explained and chanted collectively. On the last day of the workshop, all the participants chanted all the mantras that they had learnt in the previous days, lending a positive vibration to the environment. On one of the evenings after the workshop, some of the participants and team members of SAFIC participated in an hour of melodic devotional songs (kirtan) accompanied by the harmonium, drums and cymbals.

The workshop concluded on a highly positive note with the feedback from the participants who shared how much this one week of learning helped them and how they hoped to continue onwards on this journey of learning the Sanskrit language.

Feedback (from participants on what they liked about the workshop)

“I thought it was perfect! Samyak!” – Andreanne Laframboise, Canada

“The intuitive way of learning rather than by memorizing. The spirit of the language is brought out.”
– Sravan Reddy, Delhi

“Dr. Mishra’s excellent teaching style. Wish all my past teachers throughout my life were like Dr. Mishra.”
– Himansu Banerjee, Australia

“The way course material was presented and the Mantra Yoga. Excellent, really excellent. And great giving us so many Sanskrit resources. Thank you!” – Marye Tonnaire, USA

“Everything was great. Well organized, good material, things done on time. Appreciate the schedule that was sent out early. I look forward to more online classes and follow up sessions.” – Sashi Kala, Coimbatore