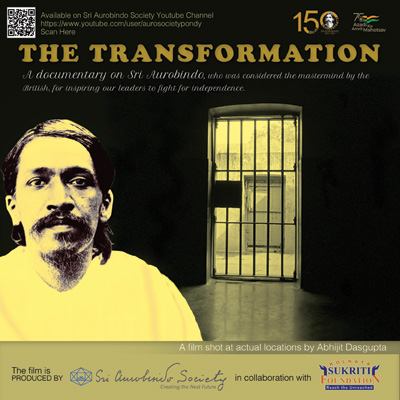 This documentary film is a tribute by Sri Aurobindo Society in association with Kolkata Sukriti Foundation on the occasion of Sri Aurobindo's 150th Birth Anniversary. It revolves around the time when Sri Aurobindo was in jail in Alipore from 1908 - 1909. The Director, Shri Abhijit Das Gupta, has made a lot of effort to shoot the film at actual locations wherever possible. Rare newspapers from the British Library and the National Library with actual writings from Sri Aurobindo form the basis of this film.
The film is released in English (THE TRANSFORMATION) and Hindi (NAYA JANMA).

To watch the film THE TRANSFORMATION, in English click here.

To watch the film NAYA JANMA, in Hindi click here.