The Transformation - a documentary film 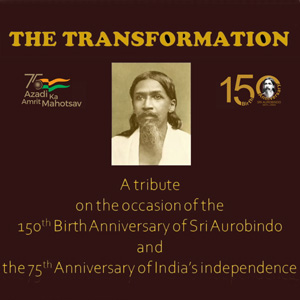 August 2022 is a very significant time in our Nation’s history. 15th August will not only usher in our 75th year of independence but will also be the 150th birth anniversary of the person who inspired leaders who fought for our independence and was termed the ‘Master Mind’ by the British for their oust from India.

On this auspicious occasion of the 150th Birth Anniversary of Sri Aurobindo (15th August 2022), Sri Aurobindo Society, Puducherry, and Kolkata Sukriti Foundation have prepared a documentary film on Sri Aurobindo. It portrays this pioneering leader of the Freedom Movement and revolves around the period 1908 to 1909 when Sri Aurobindo was in jail in Alipore in Kolkata.  Entitled ‘The Transformation’ in English and ‘Naya Janma’ in Hindi, the film is about 54 minutes long.

The film will be telecast for the first time on Doordarshan in Hindi and English on the 14th and 15th of August, 2022, and will be available on social media platforms.

Here is an excerpt of the film.

Please subscribe to the Sri Aurobindo Society YouTube channel for all future updates on this film and other projects.